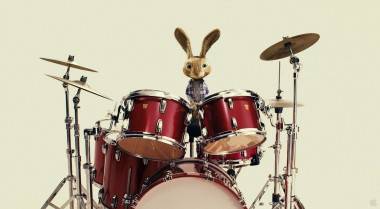 Hop is coming to destroy your mind. 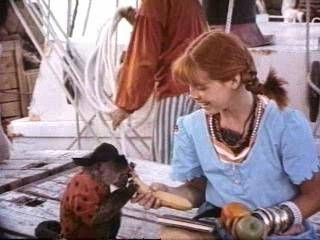 Scene from The New Adventures of Pippi Longstocking (1988).

Because it is so vastly fucking terrible, Hop should only be considered as an example of the showbiz machine at its most destructive. Specifically, it demonstrates how somebody with potential, Russell Brand, is generally forced into a series of tragic compromises at the outset of his pathetic Tinseltown career (hello Ricky Gervais!), probably so his business manager, agent, accountant and about a dozen other parasites can keep their 15% rolling in. Welcome to your first floppy-wop, Mr. Brand. Arthur will doubtless look like a masterpiece – or at least vaguely competent – in comparison.

Hop concerns the adventures of E.B. (Brand), the next Easter Bunny in line when his dad (Hugh Laurie) decides it’s time to retire. Being the magical inhabitants of Easter Island, which they share with an army of worker chicks led by the unstable and power-hungry Carlos (Moe Sizlak), E.B. and his dad can do amazing things like shit jellybeans (yum!), and travel anywhere on earth via some sort of wormhole portal. Which is precisely what E.B. does when he decides to run away from home and pursue his dream of being – get this – a drummer in L.A. 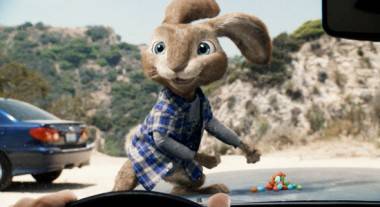 In a rational movie, E.B.’s “dream” would end with the little bunny lying in a pool of his own jellybeans as he expires from a hot shot of tainted China White. In Hop, however, E.B. falls in with Fred, a twenty-something, out-of-work dumbass played by the utterly charmless James Marsden. The big question, of course, is who the fuck is James Marsden? The much, much smaller questions include: why does the clueless Fred go to such “comic” lengths to conceal the fact that he hangs out with a talking rabbit? Any half-wit would see the enormous business potential here. Why doesn’t he become his fucking manager?

Actually, Fred does escort E.B. to a talent contest presided over by famous drunk child-abuser David Hasselhoff, in a gag that was already stale when they put it in The SpongBob SquarePants Movie seven years ago. In the plus column, Hop offers one half-funny moment when Fred’s sister mistakes E.B. for a stuffed toy, and the horny little LA drummer-rabbit gives her a look like he wants to fuck her in the ass. But that’s it. It all ends with Fred being transported to Easter Island (I watched this last night and I actually can’t remember how he gets there), where he’s tied up with black licorice while Carlos stages a coup d’etat.

Anyway. Hop seems unfinished. Or to put it another way, it’s mercifully short. America’s Christian right will probably riot over the total absence of crucified messiahs in this movie. The rest of us must watch in horror as world’s funniest man Gary (The Brady Bunch Movie, Office Space) Cole drowns in his role as Fred’s pathologically unimpressed dad. But at least he gave me a character I could relate to.