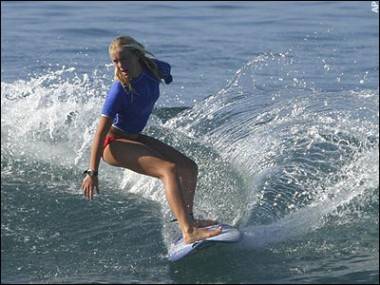 Normally I am too much of a cynic to watch, much less enjoy, a movie like Sean McNamara’s Soul Surfer. The fact the movie is “based on an inspiring true story” would usually be enough to cause a knee-jerk, film-snob reaction within my jaded little heart. However, if you can manage to put aside any cynicism you might feel towards movies of this ilk, you might actually feel a little bit… inspired.

Don’t get me wrong, there are plenty of things here amiss with this film. While the story the movie is based on is inherently compelling – up-and-coming 13 year old surfer Bethany Hamilton (played by AnnaSophia Robb) is attacked by a tiger shark, loses her left arm in the process, and then proceeds to not only survive but thrive – the writers/ producers still found it necessary to add an unnecessary layer of cheese. 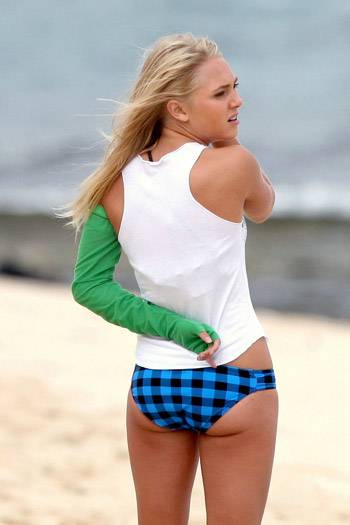 AnnaSophia Robb on the set of Soul Surfer

Robb does a good job with the role, despite being handicapped (no pun intended) by some terrible lines and some questionable special effects. Playing a real, living person is always challenging for any actor, and Robb does a great job of capturing Bethany’s genuinely courageous attitude. However, Dennis Quaid and Helen Hunt, who play Bethany’s parents in the film, seem to be floundering a bit in their roles; neither one of them seems overly-comfy with the Christian angle of this film. I might just be projecting a bit there, but in the post-shark-chomping scene when Hunt looks to the heavens and pleads to God to spare her daughter, her distress seems real, but her faith does not.

Most of the other scenes in the film come across as similarly trite and forced. When Bethany returns to surfing competition after the attack, much screen time is devoted to a fictionalized rivalry with a cartoonishly-evil competitor. It’s as if the writers thought the drama inherent in the story of a young girl being viciously attacked by a 14-foot shark, and somehow surviving that attack despite losing a major part of her anatomy, just wasn’t quite enough pathos. 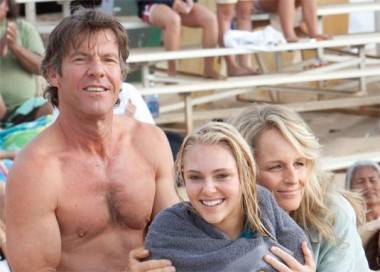 Given the film’s excessive level of cheesiness, Bethany Hamilton and her family might have been better-served by a documentary-style approach versus a fictionalized treatment of their experiences. Indeed, the home movies that play during the end credits are the most interesting part of Soul Surfer.

Still, even bad writing, a heavy dose of Hollywood schmaltz and an off-putting-to-many religious subtext can’t fully undermine how incredible Bethany’s story really is. This girl has guts. The actual attack scene is done very well – you see just enough to understand how amazing it is that she survived. It is also amazing how quick-thinking her rescuers were; Bethany was surfing that day with her best friend’s family, and their level-headed response to the incident surely saved her life. All of these people, who are real people who really did these things, deserve our admiration. So it’s too bad that the film-makers didn’t do a better job with Bethany’s story.

One response to “Soul Surfer”