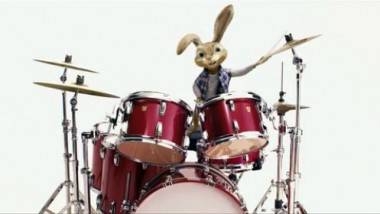 Graphically portrayed films are everyone’s favorite. In an ironic, almost Dickensian way, it seems as though film executives only think about adult movie-goers on one lone occasion: when greenlighting the various pitches and scripts piled up on their mahogany desks for animated films for children. The only notable exception being Harvey Weinstein, who cares deeply for the adult movie-goer, as long as they are also a voting member of the Academy

Scheduled for release this Friday, Hop is the new animated film from director Tim Hill (who cut his teeth writing for SpongeBob Squarepants), whose last two feature length outings were 2007’s Alvin & The Chipmunks and the Garfield sequel in 2006. Hill was perhaps waiting a full five years to release Hop in hopes we would all forget the above statement.

There haven’t been too many Easter-themed releases over the years (at least, not many that didn’t prominently feature Jesus, Mary and a cast of thousands). Therefore, we have to tip the marketing hat to Universal for finding a different Easter demographic to scramble after: less of the Good Friday crowd, and more of the Saturday morning chocolate egg hunters.

Hop stars James Marsden (unanimated – sort of) who inherits a friendship with the son of the Easter Bunny (animated and voiced by former reality-show presenter, stand-up comedian, radio personality, memoir-author, and recovering sex addict Russell Brand), on the run from his hereditary duties as bringer of all things diabetic, for a life in rock ‘n’ roll.

How better to bridge the two audiences, really? Mouth-watering, limitless supplies of chocolate for the kiddies, while playing on the long lost musical, rebellious fantasies of their beaten-down parents. A match made in boardroom heaven.

And in that spirit, here’s a list of 12 animated films truly for adults, or those of age, who never quite mastered the transition:

12.Â  Fantastic Planet (1971) – A cult French animated film from RenÃ© Laloux that is a metaphor for dictatorial societies, past, present and future.

11. Persepolis (2007) – A great historical animation, Persepolis views the 1979 Islamic Revolution through the eyes of a young Iranian girl.

10. Grave of the Fireflies (1988) – A gripping little story of how a boy and his sister survive the horrors of WWII Japan.

9.Â  The Plague Dogs (1982) – Based on Richard (Watership Down) Adams’ novel, The Plague Dogs follows two canines that escape a research lab and must survive on the outside.

5. South Park: Bigger, Longer & Uncut (1999) – Does this one really need a hard sell? Satan, Saddam, and War against Canada: a trifecta of quality entertainment.

4. Akira (1988) – Akira graces every list of animated films, invariably at, or near, the top, and has been rumored as a live action vehicle for Leonardo DiCaprio for years. Beyond post-modern, this apocalyptic tale of military excess and gang violence rivals 2001: A Space Odyssey for the craziest final act of all-time.

3. The Incredibles (2004) – More than any other person or organization, Pixar brought back the idea of films that could work for both kids and adults, after the original Walt Disney model lay waste for decades. The Incredibles, about a family of reluctant superheroes, is the pinnacle of Pixar’s achievements (sorry, I am one of the few who feels, and more shockingly, will admit in some sort of public forum, that Wall-e is overrated).

2. Spirited Away (2001) – The suburbs were never painted so accurately as in Hayao Miyazaki’s fantastical fable, considered by many the best animated film of all-time.