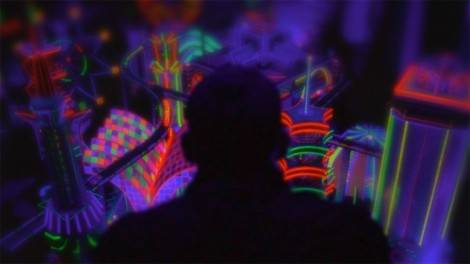 Pretty groovy, according to a French filmmaker, a French comics writer and artist team and an American short story writer.

In three separate works from last year, death is not the end. The early, violent death of a drug dealer is just the beginning for  Gaspar Noe‘s Enter the Void‘s psychedelic journey as the camera floats over and through Tokyo, watching events unfold from the dead man’s perspective. (The film stars Paz de la Huerta, whose character, the dealer’s sister, is very much alive throughout.)

In Mezzo and Pirus’ King of the Flies, characters who die in the first volume (Fantagraphics has published two volumes of the European-style comics album; a third is expected at the end of this year) come back to watch over the still-living – lovers, friends, mothers. Mezzo and Pirus’ undead are able to travel to Mars in the blink of an eye, and then back to the David Lynchian small-town that is the story’s main setting. Liberated from physical constraints, they are frustrated, morose, angry, holding onto grudges. 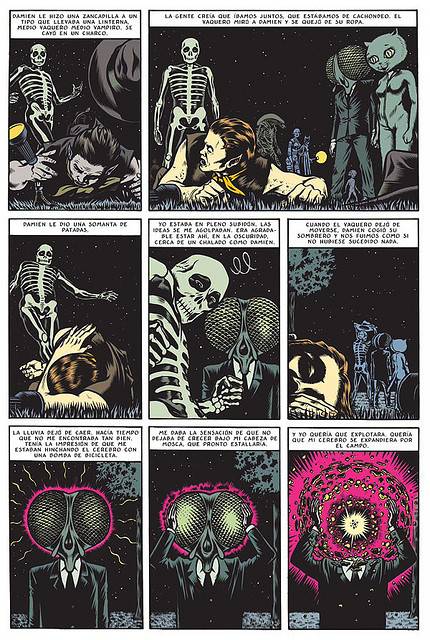 Mezzo and Pirus’ King of the Flies (Fantagraphics).

And in George Saunders‘ short story “Escape from Spiderhead”, published in the New Yorker in December of last year, the main character (spoiler alert) comes back from the dead after giving himself a lethal injection of experimental drugs. Floating over the complex from which he has escaped, he narrates: “I got snagged, found myself stuck on a facility gutter, and squatted there like an airy gargoyle. I was there but I was also everywhere. I could see it all… Mom, poor Mom, at home in Rochester, scrubbing the shower…”

Of course, this isn’t the first time dead narrators have told us their stories (for another recent example, see Alice Sebold’s 2002 novel The Lovely Bones), but it is interesting that three separate artists have used the motif around the same time, and with similar results. It’s as if they’d all read The Tibetan Book of the Dead (referred to in Enter the Void) at the same time.

The afterlife seems to be in good hands.