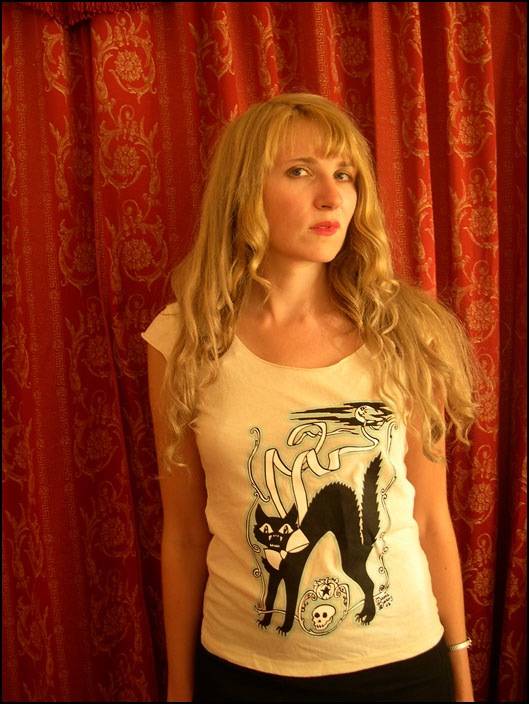 Dame Darcy has been a presence on the alternative comics scene for nearly two decades. While the Hernandes Brothers, Daniel Clowes, Peter Bagge and the other kings of alt-comics were catching most of the headlines, Dame Darcy was part of a small but vital posse of femmes plying the trade. (Lynda Barry, Mary Fleener and, somewhat later, Ellen Forney are three that come to mind.)

Known for her fine, delicate ink-line and subject matter involving waifs, faeries, princesses, wolves, and other mythic and fairy-tale-type characters, the Dame’s work – showcased in her ongoing series Meatcake, now on its 18th issue – may be the most girl-friendly of the lot. In what seems to be an inevitable development, she is currently working on a book for Henry Holt for 2012 publication that is aimed at teens and tweens and is, in her words, “a girl’s guide to the apocalypse.”

We reached Dame Darcy (born in 1971 in Idaho) at home in Portland and chatted about that book, working for Marvel on a recent project, and her band Death by Doll. Dame Darcy visits Vancouver this Sunday, Dec 19, for the inaugural Comic and Zine FairÂ at the Waldorf, which also showcases local magazines, comic presses and zine makers including Ed Brisson, Colin Upton, Cloudscape Comics Collective, Mongrel, Melanie Coles, Discorder Magazine and Robin Bougie (Cinema Sewer).

Dame Darcy performs with her band Death by Doll at 5 pm and will be available for book signing from 1-4. This is her first appearance and performance in Vancouver. 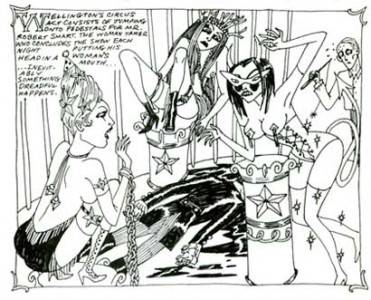 Shawn Conner: Do you have cats?

Dame Darcy: I have no cats. We gave away our cat because we’re moving back to New York. I’ve lived mostly in Manhattan for the last 15 or 20 years and here [Portland] for two years, and while I was here I was able to write my book [Handbook for Hot Witches] because it’s like solitary confinement. Now I’ve got it published and I’m going back to promote it. It helps to promote things to be in New York.

SC: And this is going to be published when?

DD: It’s coming out in 2012. It’s basically a girl’s guide to the apocalypse. That’s what I call it – I don’t know if they [the publishers] wants me to call it that. It’s like witchcraft girl scouts. We’re in the nuts and bolts stages of getting it all organized technically.

SC: Did Alan Moore [big-deal comic-book writer and practicing warlock] have anything to do with you getting into magic?

DD: Yeah, in fact when I was in my mid-twenties he was one of my biggest mentors and taught me some tricks and theories I’m putting into my book. And I’m going to ask if he’ll do a forward for it.

SC: You’re going to perform with your band Death by Doll?

DD: Yes, we’re going to play. We have a new album, Electrorococo, it’s recorded and we’re going to perform songs from it. We’ll release it next year. We have some new self-published books and Meatcake books and a Meatcake compilation, and a new calendar we’ve made for the new year. It’s a witchcraft calendar with pagan holidays and spells. And dolls and stuff like that. I think it’s going to be fun. 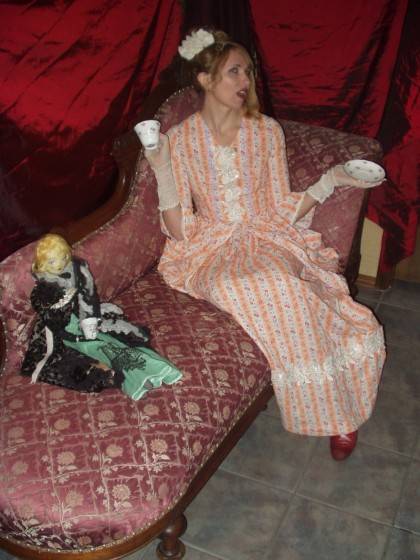 SC: I saw on your blogÂ you did a story for Marvel?

DD: Yeah, it’s for the second issue of a comic called Women of Marvel. It’s out now. It’s a fairy tale with Invisible Girl [from the Fantastic Four], “Inviserella”. The brother’s gay, he gives her a beautiful new hairdo.

SC: It’s great that Marvel’s reaching out to all these alt-comics creators and letting them have at their best-known characters.

DD: I think it’s very progressive of Marvel. I loved working with them. The editor, Mike Horowitz, was so easy to work with. I met him at the Comicon in San Diego. He’s just a delight. There was no problem. And I’ve noticed that a lot of times one would think, I’ve worked with DC and for Marvel now, that they would be the biggest sticklers. But I found they’re really just,Â  trying to make it really easy for me and they’re really realy nice and they paid me on time and didn’t dive me crazy. Other times I’ll work for indie publishers and they’ll torture me for like $100. 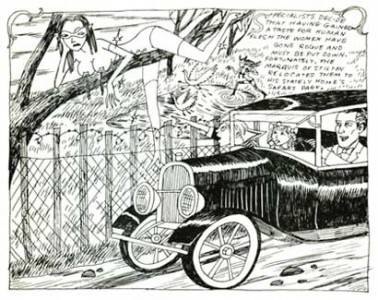