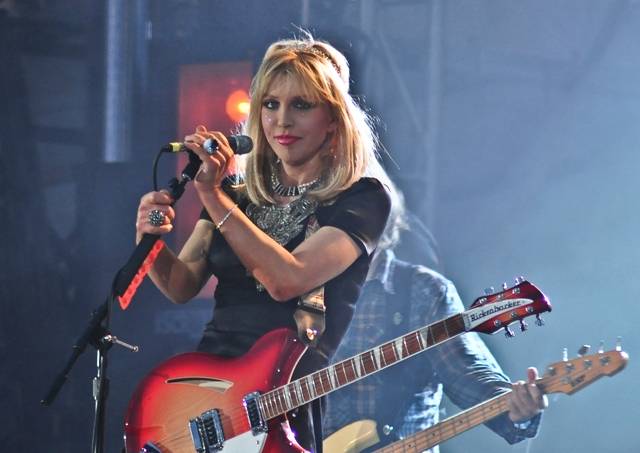 – review by Jenn Laidlaw/photos by Simon Kear (except where noted)

Note: Although I am sure there were a number of fabulous acts on Monday’s line-up, my little carpool group was heading back to Vancouver that day, so we opted to skip the final day of the festival. The thought of getting to the border earlier then the rest of the long weekend revellers was just too tempting. So, this top 10 only applies to the first two days of the fest.

The Submarines–Just as I had predicted, the Subs were a pretty lovely way to kick things off. The sun was beating down, the beer was cold (although Budweiser) and the grass was fluffy, lush and virtually untouched. Highlights were the dub-ish “1949” and catchy “You, Me and the Bourgeoisie”.

Fresh Espresso–What the heck is glam, pop, hip-hop? Those are the words being thrown around to describe Seattle band Fresh Espresso. The duo of P Smoov and MC Rik Rude met online and quickly meshed their complementary styles, creating fun, catchy hip-hop tracks that might just change the type of cafÃ© the city is known for. Have a listen to “Big or Small” and “Diamond Pistols”.

Bouncing Souls–Wasn’t blown away by these guys during their stage performance – nothing personal, their heavy stuff is just not my cup of tea, BUT I was treated to an acoustic show later from the Budweiser tent as the guys put on an intimate show at one of the other sponsor booths. They were a bit awkward about having to tone down their music for the quieter set, but I was better able to get a sense of their musical talent, and shit, I kind of liked them! 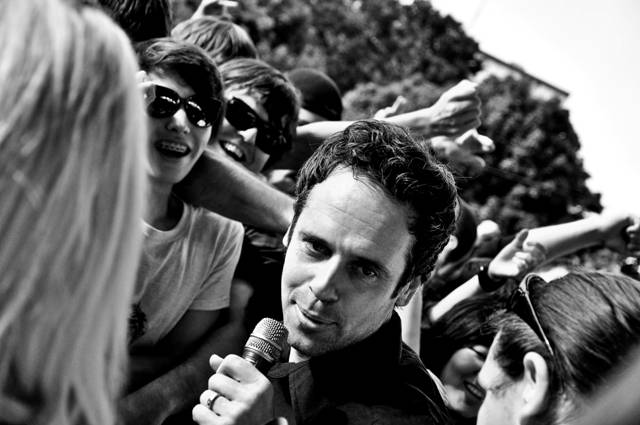 Circus Una Motorcycle Thrill Show–Not a highlight in a good way; more a jaw-dropping trainwreck, this attraction drew crowds to witness two women in cute little outfits put on a supposedly “high-wire act of awe-inspiring guts and skills.” Uh, one chick drove a rigged motorcycle along a cable while the other one sat on a trapeze under the bike smiling. They drove forwards, they drove backwards and then they flipped the bike and trapeze around the wire twice. The flip was the 10 seconds worth watching. The rest, not so much. And much to the lament of the men waiting for a close-up, the women looked far better from a distance.

Parlour Steps–After chatting with lead singer Caleb Stull a few weeks back, I was really looking forward to seeing the Vancouver band live. They played to a packed room in the Experience Music Project. The cramped, rectangular space was a bit of a pain for visibility but allowed for some wildly lit backdrops and a beautiful array of purple umbrellas hanging down from the ceiling. In between songs, Stull joked about being a part of Vancouver’s Peak Performance Project – “Ya, we send bands to camp in Canada. Instead of swimming and first aid we learn about music. Damn socialist country and government funding…”

They finished their set with an incredibly emotional performance “Keep the Fire”. For much of the song all five members were singing, eyes closed, with such intensity and anguish you couldn’t help but be moved.

Crash Kings–Stuck on a stage that experienced some pretty brutal feedback the day before, the Crash Kings hit the deck early for a lengthy sound check. Lead singer Tony Beliveau used the time to belt out arpeggios and his trademark yells and pound a few notes out on the keyboard. Despite suffering from a few sound problems during their actual set, which caused bassist Mike Beliveau to leave the stage a few times, they rocked a lively show playing crowd favourite “Mountain Man” and covered Black Sabbath’s “War Pigs”. 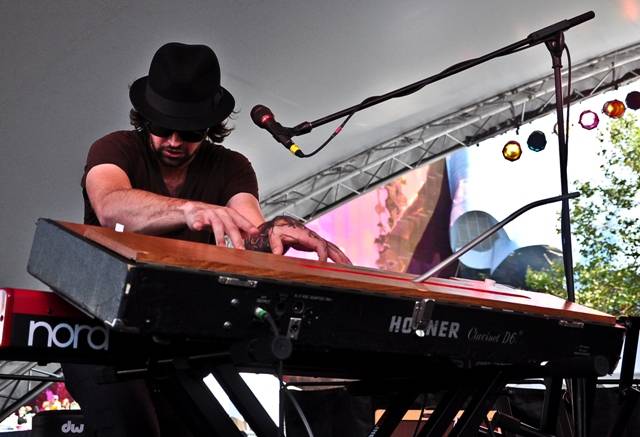 Bob Dylan–Probably the one and only time I will ever see Bob Dylan live, and I am pretty sure I didn’t blink for the almost two-hour set. Before he came out onto the stage to start things off with “Rainy Day Women # 12 & 35” we were marvelling at the giant cymbals on stage, only to find as we pushed our way closer, they were in fact the metal rings on top of two heat lamps. Poor Bobby needed a little extra insulation I guess. Sporting a pair of tuxedo pants with a big white stripe down the side and a Kentucky Derby hat, Bob was true to form, his gruff, inaudible trademark voice carrying classic Dylan tunes that were virtually unrecognizable until the chorus. Has to keep himself amused somehow I guess. 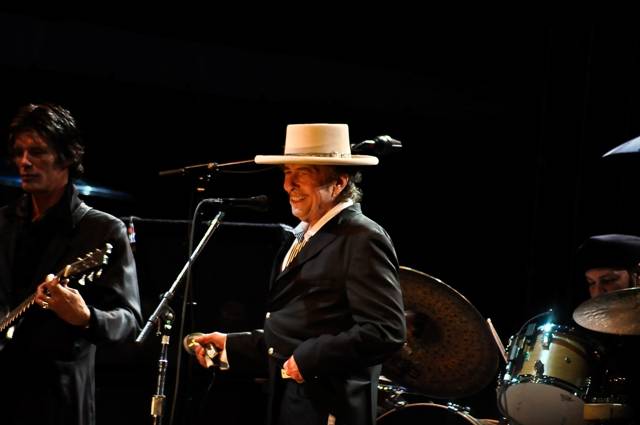 Garfunkel and Oates–America’s female version of Bret McKenzie and Jemaine Clement from Flight of the Concords, Garfunkel and Oates have a slew of YouTube music videos online covering everything from “Pregnant Women Are Smug” and “Sex with Ducks” to “One Night Stands“. Sadly I didn’t “discover” them until halfway through the festival, but spent a hangover morning in the hotel lying on the couch laughing at their ridiculous antics.

Hole–A surreal performance for many reasons. Fans were treated to a cute, kind of dolled-up Courtney Love, channelling Heather Locklear with her stiff, blond… wig?! In need of a sandwich herself, Love dove into “Skinny Little Bitch”, singing into a mixed crowd of former grunge warriors and trashed young, teenaged girls. In between raspy, old-man-sounding giggles she referenced her old hometown, Kurt and 171 Lake Washington Boulevard. Hate her or lover her, it had to be weird being at Seattle Center for the first time since 1994, where she appeared two days after Kurt Cobain died to she read his suicide note to fans [from Spin Mag]. 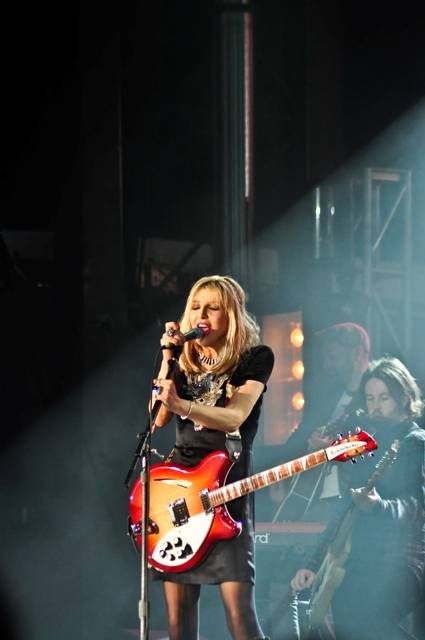 Weezer–For a bunch of preppy, dorky 40-year-olds Weezer would have blown the roof off Seattle’s Memorial Stadium – had there been one to blow off. Singer Rivers Cuomo took to the stage like a sugared up eight-year-old in his backyard tree house, whipping his sweater around, climbing up the scaffolding, jumping off the stage onto nearby outhouses and into the bleachers. I hope his band has one hell of an insurance policy.

They played heaps of their old songs to the crowd’s delight, including “Buddy Holly”, “Beverly Hills” and “Say it Ain’t So”, “Undone” and “Hash Pipe”, and threw in some random covers of MGMT’s “Kids” and apparently a Lady Gaga song (which I missed). Guttersnipe photographer Simon Kear managed to squeeze his way into the press section at the front of the stage in between Spin and Rolling Stone to snap some shots and hand River’s mic stand back to him when it fell off stage.

One response to “Hole at Bumbershoot 2010”