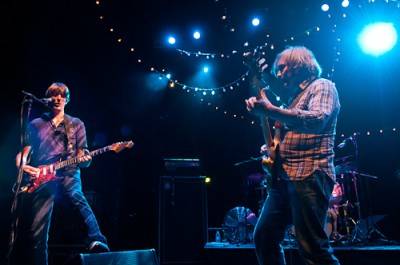 Pavement at the Paramount Theatre, Seattle, Sept 5 2010. Photo by Josh Bis for The Stranger

For a band that once claimed you can never quarantine the past, Pavement’s long-awaited return to Vancouver was a fittingly nostalgic trip down shady memory lane. Apart from the sad and relatively recent phenomenon of audience members documenting their concert experiences by taking hundreds of shitty, minute-by-minute photos and videos on their iPhones, Tuesday’s reunion tour stop at Queen Elizabeth Theatre had all the hallmarks of a Pavement show of old.

Circa-1996 sunny-side-up eggs and wizard-adorned tour shirts with 2010 price tags? Check. Bespectacled, plaid-shirt wearing concertgoers seemingly ripped fromÂ  the pages of The Onion article “37 Record-Store Clerks Feared Dead In Yo La Tengo Concert Disaster”? Check. Even Pavement’s patented looseness and sloppy-go-lucky delivery was there, despite the fact the band has spent the past year touring the world’s soft seaters, padding their nest eggs and, presumably, honing their chops after a decade-long hiatus.

Kicking things off with Crooked Rain, Crooked Rain opener “Silence Kit”, indie-rock’s golden boys meandered their way through a fan-friendly set list weighted heavily with tracks from their 1992 debut Slanted & Enchanted, including “Trigger Cut”, “In the Mouth of a Desert”, “Perfume-V”, “Zurich is Stained”, “Loretta’s Scars” and a blistering “Conduit for Sale!” which reconfirmed not only what a fantastic album Slanted & Enchanted is, but also that smiley percussionist/cheerleader/between-song-banterer Bob Nastanovich has arguably the best job in the world.

Nastanovich also lent his beer- soaked lungs to the screamy choruses of “Unfair”, which managed to rouse the surprisingly subdued audience from their aloof stupor. While the band dutifully churned out would-be hits like “Cut Your Hair”, “Stereo”, “Shady Lane” and an encore that included “Gold Soundz”, “Range Life” and “Here”, nerdy diehards were rewarded with “Frontwards” and an audience request for “Lions (Linden)”, both from the band’s Watery Domestic e.p. and virtually nothing off the tepid Pavement swan song Terror Twilight.

Ever youthful and shadowboxing frontman Stephen Malkmus even relinquished singing duties so bandmate and Pavement co-founder Scott “Spiral Stairs” Kannberg could sing “Kennel District” and “Date with IKEA”. That said, I couldn’t help feeling bad for Kannberg when, for the handful of songs on which he didn’t play guitar, he was reduced to wielding a tiny fruit-shaped shaker, which he appeared to be holding with an outstretched middle finger pointed at Malkmus.

And was that drummer Steve West I saw yawning during the build-up to set closer “Fight This Generation”? Maybe he was just growing tired of people predictably yelling out requests for “Summer Babe”, which, to Pavement’s indie rock cred, they never played.