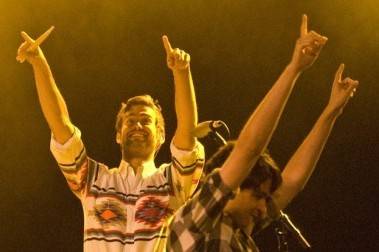 The last few shows of the 2010 Concert Series in Stanley Park kicked off over the weekend withÂ two sold-out performances by indie darlings Vampire Weekend.

It was a little crisp and damp in Stanley Park for Friday night’s show, but that didn’t stop the relatively young crowd from showing up in their hipster best. Not that they put any money or effort into their outfits of course.

The Dum Dum Girls started promptly at 6, opening their 30 minute set with a melancholy cover of Sonny and Cher’s “Baby Don’t Go”, and moving through most of the songs off of their debut album I Will Be. They seem to be following a similar formula to a number of other all-girl bands that are around at the moment – The Like and the Vivian Girls (in fact ex-Vivian Girls member Frankie Rose is part of the DDG) have a similar sound and differentiate themselves by their onstage personas. The DDG’s wear all black, short skirts, textured tights, lots of leather and bright lipstick.

It works. They have fantastic harmonies, catchy lyrics and a distinctly retro sound that is anchored by the lead vocals of Kristen Gundred (stage name: Dee Dee). This is her brainchild, and she smartly enlisted the services of producer Richard Gottehrer (who has produced albums for the Go-Go’s and Blondie and also co-wrote “My Boyfriend’s Back”). They sound great live, and got the crowd moving during my personal favourites – ‘Bhang Bhang, I’m a Burnout’ and ‘Jail La La’.

Next up was bliss-pop band Beach House.

Back in Vancouver for the first time in a number of years, this was their biggest audience in a city that clearly loves them. It was another short set at 45 minutes, with a mix of songs from all of their releases. They opened with “Used to Be” and played favourites “Apple Orchard” and “Norway”, which were clearly loved by the growing crowd.Â Lead singer and head-banger Victoria Legrand has an incredible rich and controlled voice that filled the park. In spite of their mellow sound, Beach House had people up on their feet within a few songs, preparing the audienceÂ  for the dance tunes of the headliner.

Fresh off of a three-week break in their touring schedule, Vampire Weekend took the stage, greeted by a now full Malkin Bowl. These two Vancouver shows marked the first of their fall tour with The Dum Dum Girls and Beach House. The band has been touring to promote their second album Contra since February, and has continuous dates scheduled through early December.

The lower half of the Bowl was transformed into a happy dance pit, with mellower fans lying on blankets on the grass inside and outside the Stanley Park walls. While all songs were greeted with cheers, favourites such as “A-Punk” and “Cape Cod Kwassa Kwassa” noticeably prompted the best reaction, proving Vampire Weekend’s self-titled album was perhaps the preferred release from this NYC band.

Feeling that the audience was receptive to all that was put forth, lead singer Ezra Koenig announced a live first for the band – the title track of their second album. They moved back and forth between songs off the two albums, and seeming to appreciate the fans’ knowledge of their lyrics, and the location up-grade from their last performance in town at the late Richard’s on Richards.

Although playing live is obviously second nature to the band, Vampire Weekend’s enthusiasm to be back onstage was restated by the constant smile on bassist Chris Baio’s face and their reluctance to end the show after only 75 minutes. While maybe a little chilly and disappointed to be leaving Stanley Park before 10 p.m., cheerful hipsters poured onto the downtown streets, some of whom more than likely returned for round two on Saturday.

One response to “Vampire Weekend at Malkin Bowl”