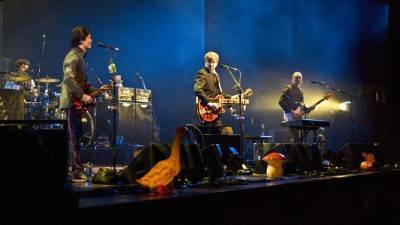 Oh, Crowded House, how I love you. The Australian/New Zealand rock band wooed and won over their loyal fans yet again with their deliciously melodic music at the Queen Elizabeth Theatre on Aug. 29.

I’ve always found the Queen E to be an odd venue for a rock show. When I’m in there I feel like I’m playing dress-up – the beautiful venue, with its bars in the lobbies and its army of ushers, makes me feel like I’m in a classier establishment than I deserve.

The flip side is that we’re left with the awkwardness of the fixed seating, when most of us would rather be up front and dancing. I’d love to see that place erupt in a dance party, but when I’ve seen Cake, or even James Brown, the Queen E just sort of, restricts you. Slaps you on the wrist, if you will, saying, “Don’t forget, this is a classy establishment. Named after the Queen.”

But within 30 seconds of entering the theatre I ran into an Australian friend of mine, there with his best friend, a Kiwi. “We’re here for a taste of the Southern Hemisphere,” the Aussie told me. We all rushed to our seats when the lady on the intercom told us to, and you could see the excitement and anticipation on everyone’s faces.

As soon as Neil Finn hit the stage, singing the unmistakable opening line for “Distant Sun” (“Tell me all the things you would change…”) he had the entire theatre in the palm of his hand. For the next two hours we sat, captivated by the foursome (and occasionally five-some) led by Finn, the 52-year-old Kiwi frontman who I believe is one of the most underrated songwriters of our era.

After setting the mood right with “Distant Sun”, the band proceeded to play mostly new songs. Some were from Time on Earth, the 2007 album that marked the first Crowded House release in 14 years. Finn and co. also treated us to some songs off their latest album, Intriguer.

“Amsterdam” might just prove to be the newest Crowded House singalong, but I was particularly taken by “Either Side of the World” – an ethereal song with soft, enchanting harmonies and a samba beat that created a beautiful and, well, intriguing soundscape. (Pun slightly intended.)

I didn’t recognize most of the songs within that part of the set, and I started to get a wee bit concerned they might not even play my favourites – “Mean to Me,” “Fall At Your Feet,” “Better Be Home Soon”. The list could go on. But, never one to let their fans down, afterÂ the new tracks Crowded House launched into arguably their most famous hit, “Don’t Dream it’s Over”.

This was to the great enthusiasm of the crowd who were sitting there all the while like well-behaved middle-aged adults, which I suppose they pretty much were. After that crowd-pleaser they continued on with a string of older hits, including “It’s Only Natural,” “Private Universe” and “When You Come”.

Crowded House periodically invited us to sing along to their songs, the acoustics in the theatre allowing a healthy dose of banter between the audience and the band. Finn was captivated by our collective voice, calling a haunting chord we somehow crafted “sexy – sexy Vancouver!”

The band was certainly feeling social, although much of their chat seemed to consist of awkward innuendo that came to sudden halts, to which Finn responded by just shrugging and launching into yet another beautiful tune.

When they finally walked off stage we gave them a standing ovation which, while well deserved, seemed a little ironic considering that was the first time anyone stood up at all during the show. The band returned a minute later with the energetic “Locked Out” to which we finally let loose and danced.

Saying it was nice to see us finally standing up, Finn rewarded us with the heartbreakingly beautiful “Fall At Your Feet”, the sweet “Weather With You”, and finally “Better Be Home Soon”. Despite the awkward onstage banter, restrictive seating, and one electrical fire – Finn’s amp started smoking after the first song – judging by the utter joy everyone seemed to be experiencing, I was wondering if we would ever let them offstage.

More photos of Crowded House at the Queen Elizabeth Theatre: