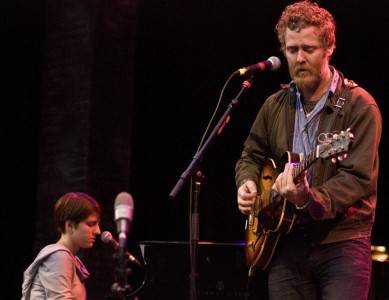 Vancouver has had its share of legendary musical performances in the past year. Adding to that list is the unique pairing of Black Francis and The Swell Season. The two acts brought in families of fans to the Malkin Bowl on Sunday: teens were seated with their bundled parents, expectant mothers lay on the lawn, rambunctious toddlers sprinted down the aisles, while everyone else in between attempted to get comfortable in their plastic seats.

Black Francis promptly opened the show at sunset with “Bullet”, blending his trademark parlando vocal style with rockabilly rhythms. The now middle-aged star rarely addressed the audience in between songs and barely interacted with his two band members; but his reputation as the leader of The Pixies, one of the most forward-thinking bands in the last 25 years, easily compensated for these minor shortcomings.

Francis displayed his ability to rouse audiences with abstract melodies and unsettling thoughts on tunes like “The Black Rider” and “Sing for Joy”. His nonchalant attitude was best reflected on the self-reflexive “That Burnt Out Rock and Roll”. As the lyrics suggest, he may have lost a bit of his luster, but Francis’ epic body of work will continue to influence the punk and indie scene for generations.

As soon as Marketa Irglova and Glen Hansard of The Swell Season hit the stage, they breezed through a cover of the Pixies tune “Cactus”, and met with an approving nod from Black Francis. The rest of the chaps from The Frames, Hansard’s band, joined the duo on “Low Rising”, the first track on their current record, Strict Joy.

Romantic and serene, this performance set the tone for a relaxing evening under the stars. Feeling the vastness of the space, Hansard warmly invited close to 50 audience members to sit amongst the band. Needless to say, security wasn’t exactly thrilled with this decision. After a few folks in the first row complained about the obstructed view, the fans (including a charming nine-year-old named Olivia who offered homemade jewelry to her favorite duo) were forced to exit the stage, but not without a heartfelt apology and blue-moonlit serenade from Hansard.

Irglova took her turn under the spotlight with “If You Want Me”, her wistful and silky vocals carrying across the park. Hansard harmonized with her on “Lies” and “When Your Mind’s Made Up”, balancing her delicate tone with his earthy rasp. As the rest of the band took a breather, Hansard delivered a no-holds barred performance of “Leave”, accompanying himself on the guitar while almost in a pained scream as he sang “Let go of my hand, you said what you have to now leave”.

As the temperature dropped a few more degrees, Hansard noticed a two-year-old weeping in the crowd, and joked, “Your kid doesn’t like our band. Don’t force them to come!” He then dedicated the sorrowful “Back Broke” to the tiny tot. Picking up the pace of the evening, The Swell Season jumped into a spry rendition of Van Morrison‘s “Into the Mystic”, followed by a Western Irish violin interlude from Colm Mac Iomaire.

Hidden as he was by a monstrous speaker, I couldn’t fathom how a single musician could create such a multi-layered sound. “Feeling the Pull” was another romping track that had Hansard riffing on his harmonica while doing a jig and shuffling his feet. Then out of nowhere, an adorable pre-schooler popped onto the stage to dance for the amused band, adding to the high-spirited and spontaneous atmosphere of the entire show.

The Swell Season rounded off the evening with their Oscar winning song “Falling Slowly” from Once, a picture of the immense chemistry, precision and passion that these artists possess. Romantic attachments aside, Hansard’s warm personality and charisma, steadied by Irglova’s poise and magnetism, creates a solid musical partnership that will go down in the books.

3 responses to “The Swell Season at Malkin Bowl”