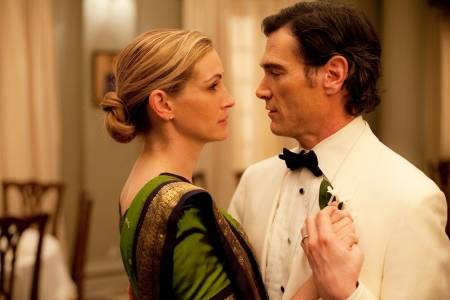 It is not very often that I get to participate in mass frenzy around movie releases, so it was an interesting experience to join the 90% female audience at the sneak preview of the much-anticipated film Eat Pray Love, based on the successful book of the same title by American writer Elizabeth Gilbert.

Being a great fan of the book and its heroine Liz, I was concerned about the casting director’s choice for the main role. I mean, as much as we all like Julia Roberts, she swiftly takes over any movie she’s in and makes it all about her 15-tooth-wide smile and fabulous hair.  My concerns did not prove to be unfounded, and the larger-than-life effect Julia tends to have on screen was exacerbated by the fact we sat in the very first row noting every pore on her skin and every quiver of her expressive lips. 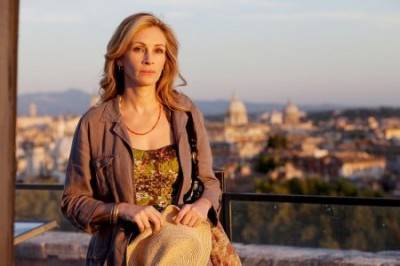 As to the movie itself, I cannot say it does the book justice, which is unfortunately often the case with brilliant books made into films. On screen, Eat Pray Love is devoid of the richness, detail and depth, not to mention the intricately developed characters, in Gilbert’s writing. I imagine for someone who has not read the memoir – as was the case of my movie date – the storyline would seem choppy, somewhat superficial, and the characters’ behavior missing credibility and realness.

For someone who has read and loved the book (this was about half the audience), it is disappointing to find how much precious detail was left out. Unlike the heartfelt, honest account of the author’s intense personal journey, the visually stunning  and glamorous frolicking of Julia Roberts is like a weak bouillon version of the substance-rich memoir: watered-down, lacking on the flavour front, with a few meaty morsels in the form of big Hollywood names thrown in to add flavour.

My Elizabeth Gilbert-worshiping aside, I have to say that the director Ryan Murphy accomplishes (with reasonably good results) a nearly impossible feat of condensing an epic story into a two-hour movie. The luscious display of foreign lands is a pleasure to look at, and the attractive cast successfully portrays a variety of endearing characters despite their short time spent on-screen.  And yes, Julia Robert’s charm does win everyone over in the end, and by the time Javier Bardem shows up, you forget about the book altogether.