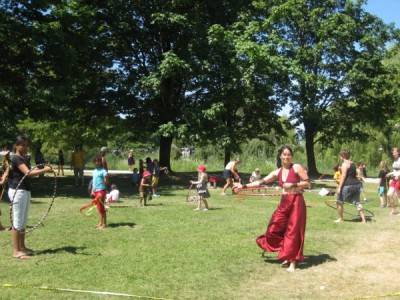 A dreadful feeling came over me as I woke up to the typical, grey skies of Vancouver.

The gloominess was definitely a threat to the closing day of the city’s annual folk festival. But as the late morning approached, the sun finally shone, signaling a fantastic day of revelry ahead.

As I circled 4th Avenue, praying for a parking spot to miraculously appear, I passed by the most adorable kids running a traditional lemonade stand. The mini-entrepreneurs were making a killing from the eager concert-goers on their merry way to Jericho Beach Park.

Just after entering the gates of the green and expansive venue, I could hear Fish and Bird churning out a contemporary twist on rustic, old-timey music. Their heartwarming set exhibited the sensitive rasp of Taylor Ashton’s vocals, supported by a swell of bluesy string-oriented melodies and drawling percussion from the rest of the band. 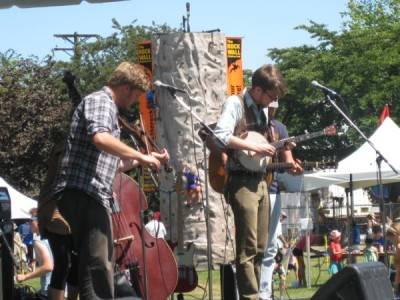 The throwback group from Victoria, BC shared the stage with Annie Lou for the workshop entitled “Left Brain Blues”.Â  Lately, the latter all-female group has gained notoriety in Folk and Canadian music circles for their interesting mix of country-gospel with cabaret-style vocal harmonies.

The bands matched each other tit for tat, both covering Hank Williams classics and creating a warm, Southern Bayou atmosphere. 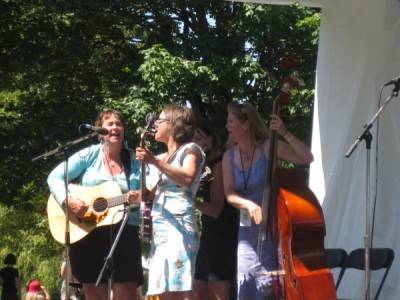 On the neighboring stage, the Afro-centric beats and Latin sounds from members of the Playing for Change Band and Las Alegres Ambulancias were drawing curious listeners by the second. A parade of pink fairies of all ages and sizes made sure to lead a dance train in front of the performers, whilst a jamboree of hula-hoopers spiraled their hips to the pulsating music.

The beaming musicians in colorful batik outfits played a mixture of percussive instruments, from bongos to maracas, while belting lyrics in numerous African languages, Spanish and Portuguese. Their cover of the classic “Guantanamera” topped off their incredibly vibrant performance. 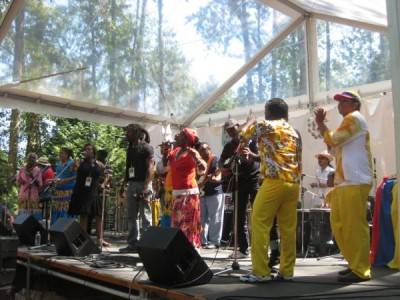 Over by the beach front, one of the larger stages hosted the jam-session created by folk-roots groups United Steel Workers of Montreal, Timber Timbre, Matt Epp and The Gertrudes. The tent was bursting at the seams with the amount of people and talent on the stage. The layering of numerous fiddles, guitars, mandolins and harmonicas resulted in an eclectic, twangy sound, awaking fans that had begun to fade away in the summer heat. 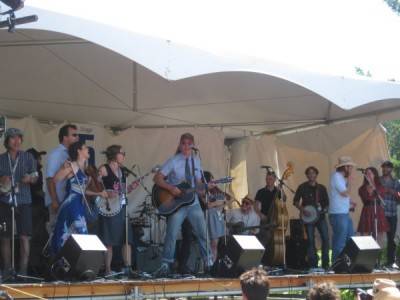 After making a much needed round at the international food court (the grounds boasted ethnically diverse options, including Mediterranean, Thai, Mexican, Chinese, Polish and French cuisines), I was drawn to the opposite side of the field by the inviting guitar playing of Afie Jurvanen of Bahamas.

Known previously for his work with indie goddess Feist, he has made the bold move to go solo. His hip, sultry and satirical love songs, paired with a winning smile and devilish charm got audience members swooning to tunes like “Sobering Love” and “Hockey Teeth”. 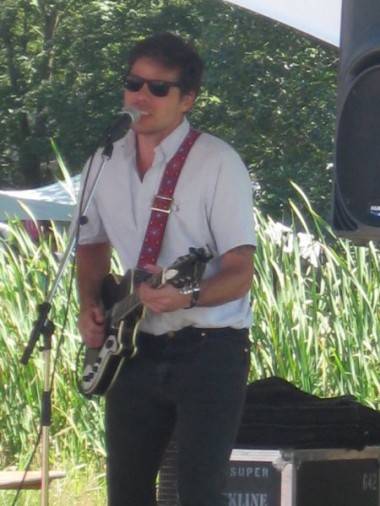 Straight from Memphis, Alvin Youngblood Hart gave listeners an education in the Delta blues even through his sound check. He greeted the crowd with a hearty “Live long and prosper” and a Vulcan wave before performing what he called “a Saturday night song” on a tranquil Sunday afternoon.

Hart displayed his jaw-dropping ability to create a steady bass line on his acoustic guitar while simultaneously playing a melodic riff, at different timings on the same instrument. His deep, country-rock voice complemented the Southern, mystic themes of his songs. 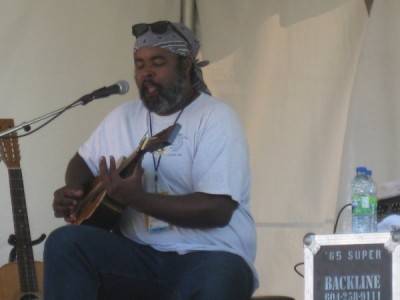 Unfortunately, I had to leave his set prematurely to catch Colin Hay at the other end of the park. Formerly of the ’80s group Men at Work, Hay saw his career suddenly rejuvenated when actor Zach Braff featured his solo work on the soundtracks of Garden State and Scrubs.

In between songs, Hay joked about his erratic career, recalling working with Ringo Starr, being shoved out of the limelight for around 20 years, cooking a dinner of Peruvian rice for Sir Paul McCartney (apparently Paul did a half-assed job with the dishes), then regaining enough popularity in the past five years to be able to afford real granite tiles to renovate his kitchen.

These extended storylines were broken by calm, bittersweet love songs like “I Just Don’t Think I’ll Ever Get Over You”, tracks from his latest record, American Sunshine, and a cover of “Norwegian Wood”. 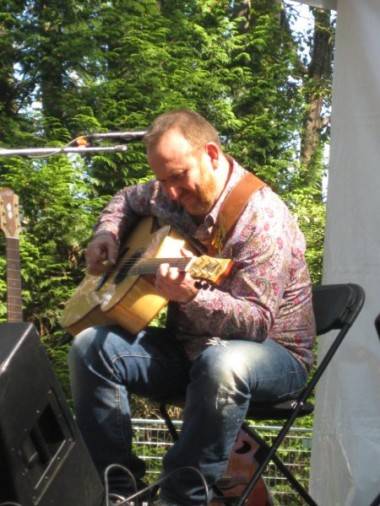 While wandering the grounds, I was pulled towards Stage 6 by the pumping dub music of the Ecuadorian group, Sarazino. The magnetic personality of lead singer Lamine Fellah and his sprightly comrades had hundreds of fans hopping and chanting along to their catchy tunes. Even the slower track, “Nadia”, a song that incorporates tango with a ska vibe, had everyone involuntarily swaying.

Their new strain of reggae recently caught the attention of Toots from the Maytals, who recently decided to record with the band, much to the delight of Fellah, a long-time devotee. Sarazino closed their energetic set with “People”, a song that reflects the multi-cultural and unifying nature of the festival. 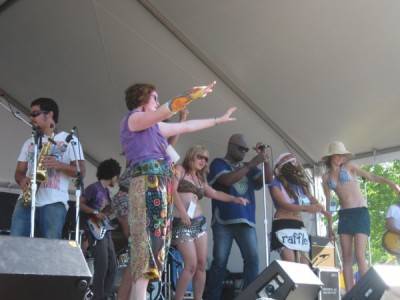 I had to carefully weave my way to the front of the main stage to catch a glimpse of Brett Dennen. The indie artist’s goofy, youthful appearance had the more mature audience wondering if he was even of legal drinking age.

But as he opened his mouth to perform the groovy number “San Francisco”, he demonstrated wisdom beyond his years. Shuffling around the stage like a cross between Mick Jagger and Sam Rockwell, he delivered a fully-committed set that was difficult to pry your eyes and ears away from.

On the upbeat “Comeback Kid”, the crowd joyously sang along, embracing the contagious anthem. This wrapped up my folk fest experience perfectly. I’m sure Vancouver crowds and its many visitors will be anticipating another weekend of fine music, R and R and maybe even sunshine next year. 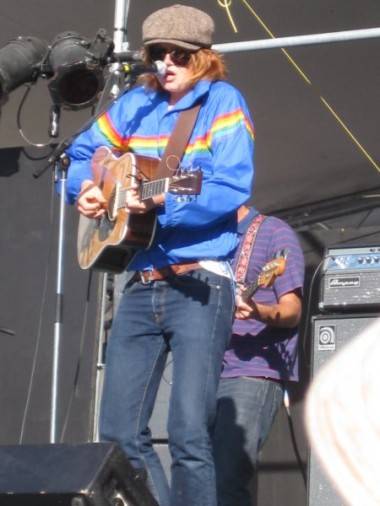