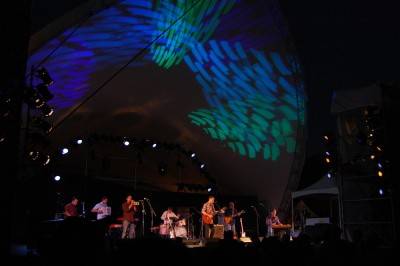 It’s been over a decade since I last attended the Vancouver Folk Music Festival, when I volunteered as a beverage server (I remember being especially thrilled to pour water for a great gypsy act that I recognized from the film Latcho Drom) and had a pretty good time being exposed to new and wonderful music, a good dose of mid-July sunshine, and crowds of people seemingly born of that sunshine. Not much seems to have changed since then, other than an addition of a beer garden which gets a point from me (though the unending sea of picnic blankets that spreads out as far as the eye can see still gets a minus one). Its location in Jericho, on a beautiful park right on the beach, with a great view of our mountains and buildings, makes it an almost too-good-to-be-true venue, and definitely one of the best festival offerings of this city.

With only the Main Stage active, Friday evening served as a good warmup to the much more active Saturday and Sunday festivities. Lets look at the acts.

Gadelle (P.E.I, Canada) – I arrived halfway through the set of this French-Acadian band consisting of four ladies on the violin, accordion, and bass, happily rousing up the crowd and step-dancing on boards with fancy footwork. It was pleasant enough, though I took the chance to wander around the park a bit, taking in the vibe. 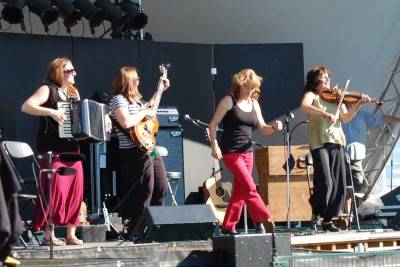 Luluc (Melbourne) – ZoÃ« Randell and Steve Hassett’s sombre and haunting Leonard Cohen-esque melodies sharply contrasted with the Frisbee-throwing and hackey-sacking going on in front of me but, along with the beer I was enjoying at the time, put me into a nice relaxed state. Definitely a good act to check out if you’re in the mood for something mellow when the play again Sunday morning.

Shane Koyczan and The Short Story Long (Vancouver) – Okay, I should start off by saying that I’m not a big fan of spoken word poetry and usually roll my eyes when people gush about Koyczan’s opening ceremony performance at the Winter Olympics. I find his stylings, though typical of the form, often range from overly earnest and sentimental to pretentiously Deep Thought-y, with some extended metaphors and Star Wars references thrown in. Still, Koyczan does know how to charge a crowd and there’s something that can be admired in how he builds up his tempo and pitch to an almost frenzy. Short Story Long provided some simple melodic background music to Koyczan’s rants and occasional singing. 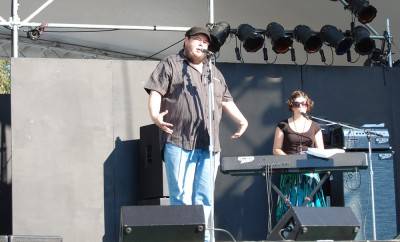 Bassekou Kouyate and Ngoni Ba (Mali) – After the palette-cleansing of the strong and natural singer-songwriter Catherine MacLellan, we then experienced what was the unquestionable highlight of the evening for me. Bassekou and his family brought a form of traditional Malian music crossed with North American roots music that was at times polyrythymically creeping and hypnotic, and other times, fully charged dance-your-face-offs. Using traditional ngonis (ancestors of the banjo) and hand percussion, the sound was earthy and fresh with addictive groves that at times felt familiar and still completely out of this world. They were a pleasure to watch too, often slipping into cool synchronized moves in their purple and gold robes. Koyate’s wife, Ami Sacko, was a strong presence in the group with her beautiful, piercing and sometimes sorrowful, singing. Their electrifying performance reminded me of what I enjoy most about these kind of festivals. 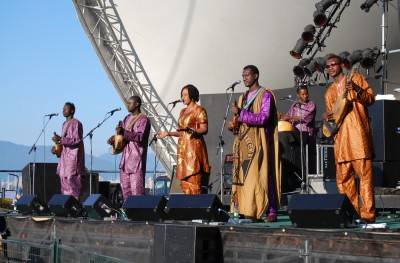 Po’ Girl (Canada) – Lovely banjo and clarinet-assisted harmonies, along with a joyfully generous stage presence, make Po’ Girl instantly likeable. Once based here in Vancouver, now out East, you are still quite likely to have them come to your town in the near future. Check them out. 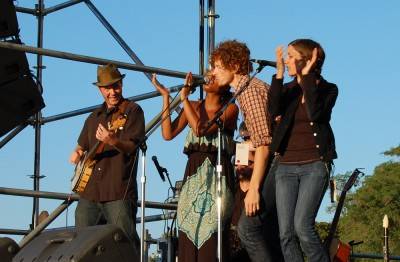 The Avett Brothers (North Carolina, USA) – Noticing the instruments brought on the stage (cello, standup bass, banjo) someone unfamiliar with the Avett Brothers might not expected them to bring such a loud and rocking sound. A few minutes into their first song, a crowd of young fans (mostly swooning girls) had already gathered at the edges of the stage and some of the older picnic-ers were glancing at each other nervously when one of brothers belted out a lyric in a loud scream over a thumping groove. Though it might have felt jarring to some, that addition of that unrestrained punk aesthetic is what makes the band something more than simple good bluegrassy rock and roll. 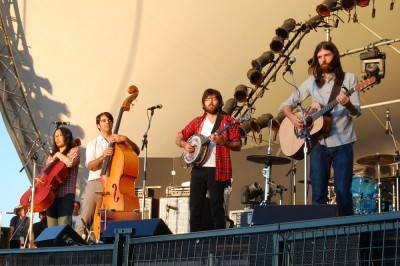 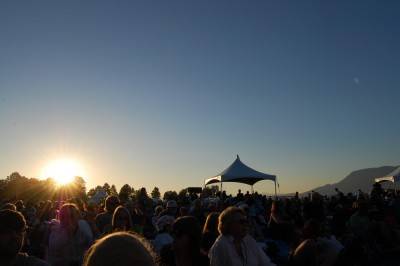 Timber Timbre (TO, Canada) – With the twilight came out a hooded Taylor Kirk, main songwriter of Timber Timbre. His spooky and quivering voice, though reminiscent of Devandra Banhart, is really in its own place (the place that comes to mind is some dark forest with shadowy animal spirits.) The minimal accompaniment of violin and autoharp to his guitar playing intensified the eerie beauty of his songs. Really wished I could have seen him do a full set (those who are going the festival on Sunday catch him on Stage 5.) 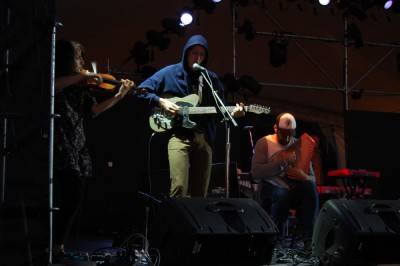 Calexico (Arizona, USA) – Dark and cooler now, Tucson’s Calexico warmed up the crowd with their latin-tinged alt country. Tight yet spacious, the musicians (seven in total) were given a lot of room to show their skills. Frequent blasts of the two trumpet players were ofset by the sweet strains of the pedal steel, though the vibes and the keyboards seemed too quiet. Lead singer Joey Burns’ voice came across a bit thin too, and failed to make a strong connection. Still, the musicians kept the energy up, and often I felt myself closing my eyes wondering if there’s still time to plan a summer trip to Mexico. 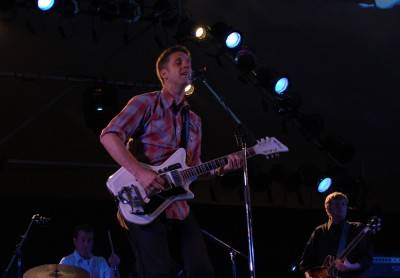 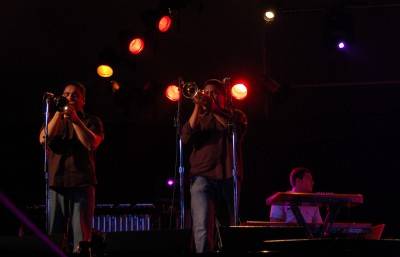