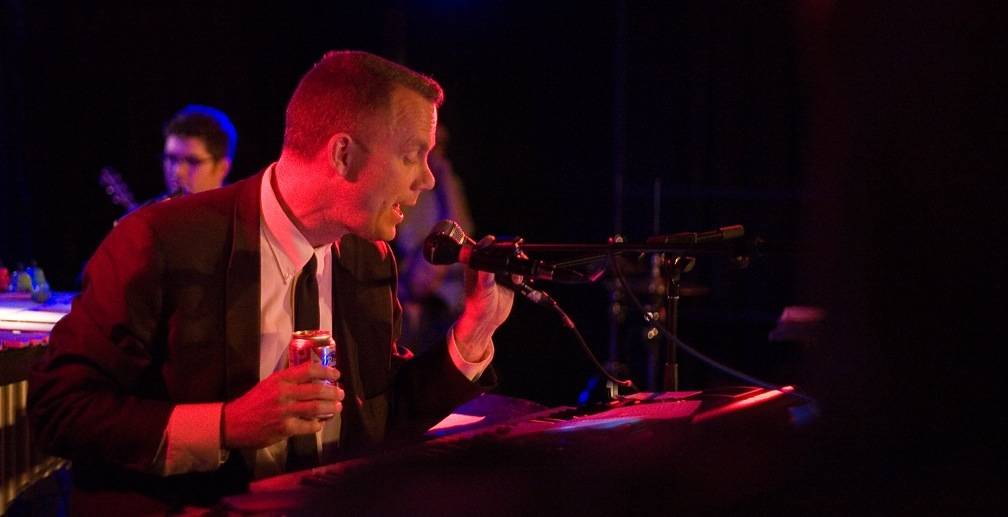 Earlier this year my partner and I recorded the sounds our old house made. We may have been a bit sad about having to leave the place, but we also wanted to gather sounds to use for background or percussion in later recordings. We spent an evening drinking wine and recording the creak of floorboards, doors, and cupboards. We stomped around and knocked on walls. Turned taps off and on.

Although perhaps not as conceptually accomplished, it’s this appreciation of unusual or “non-musical” sounds that duo (and couple) Drew Daniel and M.C. Schmidt of Matmos have used in their approach to their eccentric and innovative music. Their 2001 album, A Chance To Cut Is A Chance To Cure, for instance, used sounds derived from a surgery operating room to somehow create something weirdly accessible and upbeat.

On other albums they’ve used everything from amplified crayfish nerve tissue to a frozen stream thawing in the sun to more regular instruments, such as cellos and banjos. Oh, and they were also responsible for those textural micro-rhythms and samples on Bjork‘s Vespertine as well as controlling the electronics on her live tour.

Matmos‘ new, as-yet-unreleased album, Treasure State (about Montana, it seems), finds Daniel and Schmidt collaborating with a Brooklyn-based experimental percussion group, which is accompanying them on the tour. I had not heard of So Percussion before, but soon discovered it was a perfect match for Matmos. The group also provided a welcome visual element to what could have otherwise been a couple guys bobbing in front of laptops and tweaking knobs on machines.

We knew this was not going to be a booty-shaking sort of evening at the Biltmore when Daniel came on stage and suggested we bring out our tables and chairs onto the dance floor to fully appreciate their quadraphonic sound system. We complied, only to be then subjected to Matmos’ bewildering opening act, Lexie Mountain Boys, made up of four girls dressed like thrift-store pirates (or were they lost CocoRosie groupies?) seemingly enjoying the benefits of some good mescaline. Their set consisted of chanting and wailing as they clamoured over and thumped a large box on the stage. The chants seemed improvised and fairly nonsensical, other than a repeated phrase: “Father’s Day is everyday at our house”, which… well, I’m not going to go there.

After the girls were done, we were treated to a more compelling form of weirdness, when a member of So Percussion took to the stage and started playing the spines of a potted cactus. Another member joined him, then another, until all were huddled around the prickly plant, plucking away and rubbing their hands over it, forming complex rhythms ofÂ  pops and snaps. Matmos’ electronic accompaniment entered in slowly, climaxing with the soothing white noise of rainfall.

The next piece operated as a kind of rhythm workshop where only four woodblocks were played. Simple, but hypnotic, it easily demonstrated that So Percussion had their chops. A richer arrangement, composed of drums, twinkling vibraphones, a squeaky fish toy, a conch shell, dropped chains, a bowed saw, and colourful electronic dashes followed: it was groovy, textured, and magical, in this bright-eyes-peering-out-of-a-jungle sort of way.

There was a sense of anything being possible, which would remain strong through the whole eclectic show. Wonky synthesizer lines flowed around samba rhythms, water was scooped and poured into a metal pail, a sheet of metal wobbled to shuffling industrial beats. There was a great hi-hat-only jam and even some acoustic guitar riffs thrown into the mix without seeming out of place. It was a delightfully tactile and organic approach to a genre of music that is often seen as cold and mechanical.

The musicians seemed relaxed, and they engaged the crowd, especially with a hilarious story read by Daniel, partly through a vocoder, making him sound like a choir of harmonizing robots. Showing that they didn’t take themselves too seriously, they ended their set with a kind of tribute to beer, with everyone playing beer cans; tapping them percussively, crumpling them up, and – although this produced no sound other than a few cheers – chugging down, in the case of one of the percussionists, a whole can.

Leaving the venue, I couldn’t help hearing the sounds around me (the buzz of the Biltmore’s neon sign, the clicking of my keys as I unlocked my bike, soft roars of nearby traffic) as an integral part of the music still looping in my head, a testament to the ability of good art to transform one’s everyday sensory experience into something surprising and beautiful.

2 responses to “Matmos at the Biltmore Cabaret”