Boy, do I love Titus Andronicus. The bit where the evil bitch mother eats her spoilt-rotten children inÂ a delicious meat pie is, well, delicious. And the bit where the virginal Lavinia (was that her name? Sounds pretty Shakespearean to me) gets raped, then has her hands cut off and her tongue cut out, well that bit is pretty gory too. I love gore – not enough art has fake blood by theÂ gallon, if you ask me. No, at the end of the day it probably isn’t the most subtle of Billy Boy’s plays, but it’s a damned good spectacle to witness.

But that doesn’t really help you gauge whether Titus Andronicus, the band that Shakespeare named his first play after, was any good when I saw themÂ last night at 917 Main [formerly Vancouver’s metal/noise home, the Cobalt. -ed.] Ah man, you’reÂ putting me on the spot here – was it any good? “I dunno,” I cry, close to tears now, “I can hardly remember the set!” I remember theÂ lead singer going on a rant about something, I think it was about the American/Canadian border control giving him a hard time because they asked him to empty all the goods out of his massive beard. 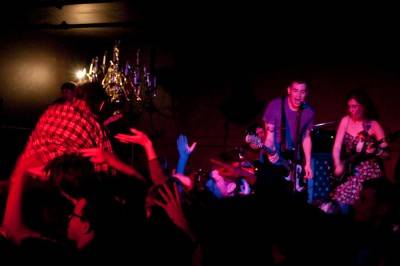 Anyway, it left a slightly bitter taste in the mouth, and seemed to retard the set a bit.Â Apart from this passage, the show flowed pretty well, mixingÂ new and old tracks, with an emphasis on the new album tracks. This seemed to please a fair few in the ground, because almost everything was received with hand-jiggling enthusiasm, but if you want my honest opinion (of course you do), I prefer the first album, The Airing of Grievances, because it’s more gritty and punky than the new one, and because it allows me to reminisce about all those times it got played in my house at university, and how being drunk and shouty is boss.

And for me, that’s when the Glen Rock, New Jersey band is at its peak, when it’s shouty and I’m drunky. Fortunately Titus Andronicus has a decent front man for this – really he was the only person on that stage who drew the eye, with his loads of fidgety energy andÂ frantic little guitar solos. Oh, and they were a pretty tight band. And they have some pretty cool songs.

So did I enjoy the set? Yeah, I suppose I did a bit, but all these positive factors somehow don’t add up to a great show. It isn’t going to live on in the memory as Shakespeare’s blood-and-guts-fest does years after I read it. The Titus Andronicus (the band) that I’m going to rememberÂ downÂ the lineÂ will be the one on its tasty, anthemicÂ debut album,Â the one that we foghorned out in our dingy student flat and which gave us such cheap thrills. 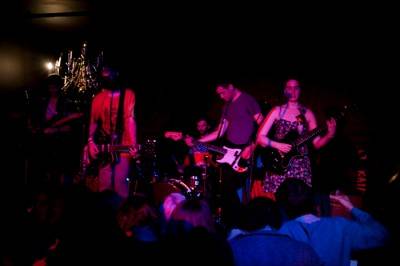