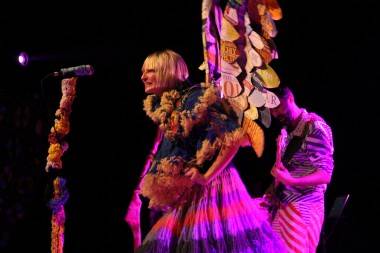 Sia‘s We Meaning You Tour kicks off at the Commodore Ballroom in Vancouver April 10 [Ed. note – the show was cut short due to health problems; read our review and see more photos here]. But perhaps the tour, in support of the Australian singer’s fifth album We Are Born (scheduled for a June 8 2010 release) might be better labeled the “Going to the Dogs Tour” – for this one, the downtempo princess is bringing along her dogs.

We talked about this and more during an interview on Sia‘s third day of press in the UK (she was slated to fly to Paris and Berlin for four more days of press, then return to New York to shoot a video before starting the tour). Other things you need to know about Sia Furler: besides her successful solo career (2008’s Some People Have Real Problems rose to #26 on the Billboard album chart), she’s also recorded and toured with Zero 7 and co-written songs for Christina Aguilera’s forthcoming album Bionic.

We Are Born also marks a new, more upbeat direction for Sia – the song “You’ve Changed” is a full-fledged pop tune, and should be a huge hit. Perhaps it’s because she brought her dogs to the studio with her… 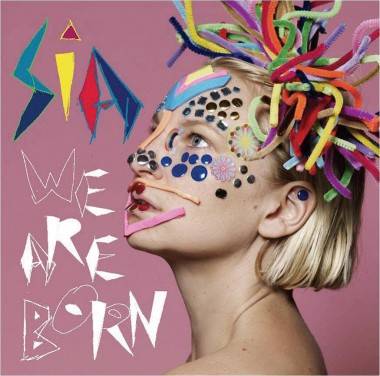 SC: You must be sick and tired of talking about yourself.

Sia: Oh my God thank you for acknowledging that. Oh my God I want to diarrhea myself out of myself. [laughts] I’m so over talking about myself.

SC: I won’t even have any material for Twitter at this rate.

Sia: I’ve stopped writing on there! I’ve got nothin’.

SC: I guess we should talk about you anyway…

SC: You have two dogs.

Sia: Oh my God I love them so much, sometimes I want to squeeze them until their eyes pop out!

SC: Is it true you selected the recording studio for the new album based on the fact you could bring your dogs? 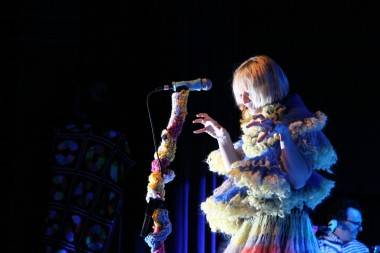 SC: Are there that many recording studios that are not dog-friendly?

Sia: Nearly all of them really. I stopped enjoying my job, because I had to leave the dogs. So I’ve decided I’m taking the dogs wherever I go now. So they’re coming on tour with me. I’m going to see if I can’t make it work. I do like aspects of this job, and I’d like to continue to be able to do it, but I won’t do it at the sacrifice of my mental health. And, it’s a pretty difficult job psychologically. So I’m just trying to work out a way to survive, without becoming a heroin addict or a pill-popper or an alcoholic or total narcissist.

SC: Do you find it stressful?

Sia: I really do. The thing I find stressful is, I thought I was really extroverted, and what I’ve discovered is I’m quite shy. I don’t really like the attention, unless I’m in control of it. [laughs] That’s the difference between being onstage, where everyone’s contained in a room and you’re safe because you’re three feet from them, and you’ve got the microphone. I’ve never really been famous, and I’ve just started to get a little bit famous over the last couple of years and I’ve found it really uncomfortable. And I don’t like it, I don’t like any of the hysteria or fragmented energy that comes with the people who hang around by the stage door after the show. That makes me feel really unsafe. Just a lot of weird energy around.

SC: I guess you can understand why, when this happens to someone in say their early 20s, it can totally freak them out.

Sia: Yes. Absolutely. It does not surprise me at all that Britney Spears ended up in a mental hospital, that Amy Winehouse is a heoroin addict. I want to have a meeting with the girls who are doing it and surviving it and are healthy and not taking a fuckload of drugs. I just want to know, what is the secret?

SC: And who would these girls be?

Sia: Miley Cyrus? She’s doing it and she seems happy! How does she do it. What about Madonna. How in fuck’s name she does it. Beyonce? 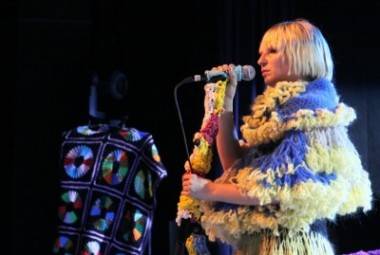 SC: I think Madonna can do it because she’s probably a control freak.

Sia: And she doesn’t mind being a bitch either, which I do mind. I’m not good at protecting myself. If I don’t have the energy I’ll still pose for a photo and give them a hug and then have a conversation with them about their granny and their feelings about one of my songs that was from eight years ago and what they were doing and what they were eating when they were listening to it. I’m not good at saying, please, leave me alone.

SC: Do you think that’s the Australian in you?

Sia: We really are polite. It’s genuine. We genuinely don’t want to hurt anyone’s feelings, and we’re a really friendly, easygoing culture. And here’s the other weird thing. When I’m in Australia, ‘cos there’s six weeks of fame when you’re doing all the promo, and then usually you drop off and things go back to tolerable, but you just have to deal with that. I was in Australia for part of that but the Australians don’t give a shit. They don’t bother you, nobody cares, they don’t want your photo, they don’t want anything from you. It’s a weird job. And yeah, I want to ask people like Miley Cyrus, how do you do it.

Sia: That’s the other thing. The majority of it is a lie. Even right now, I’m s’posed to entertain you while we’re talking, I’m supposed to leave you with the impression that I’m really interesting, smart, funny, beautiful, appealing and engaging, all of the good things. And just be on, be on all day for different people, for meeting record company executives, for meeting interviewers, whatever, for anything. And it doesn’t leave much for people at home, the people you really love and care about. I’m not really sure I’m willing to sacrifice that? Like, if you’re tap-dancing all the time… I’m just trying to work out how it’s going to work for me. And I think it started by saying I’m taking my dogs on tour!

SC: Well some people take their macrobiotic chefs, you take your dogs. What are the logistics of that?

Sia: I want to stay on the bus, I don’t want to stay in hotel rooms, so the band will have hotel rooms and I’ll have the bus. There will always have to be generator, so I can have electricity. There’s that. We need to pull over at 10, at 4 and at 11, if we’re driving, that’s when the dogs need to go for their walks. I think that’s pretty much it. And hope they don’t shit on the bus and someone rolls out of their bunk bed in their expensive socks and steps in it!