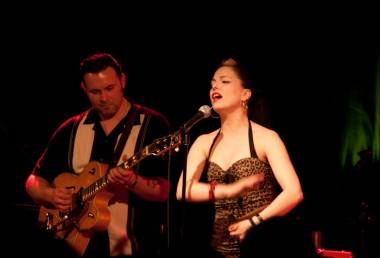 Imelda May and Darrel Higham at the Commodore, March 20 2010. Kiri Rostad photo

“And can you put that my husband comes up with the most amazing guitar riffs ever?” asks Imelda May as she’s about to head out the door of the waaaaay-overpriced Giovane cafe (four bucks for a muffin!) in the lobby of the Fairmont Pacific Rim in Vancouver.

Consider it done, Ms. May.

In Vancouver a day early for her set opening up for Jamie Cullum at a sold-out Commodore Ballroom, May exudes both down-to-earth Irishness (she’s from Dublin) and rockabilly cool. Now on her second album, Love Tattoo (and with a third on the way, at least back home in the U.K.), May – who’s been honing her rockabilly chops since she was 16, nearly 20 years – is poised to take North America by the same leopard-print storm with which she’s taken Spain, Ireland and England. Love Tattoo is both charmingly retro and svelte-ly modern, May’s voice and her songs are equally great, and there’s no one quite like her

After checking out some of the preserves sold at the cafe (turns out May makes her own jam), we began the interview by asking about her appearance on the 2010 Grammys, her biggest North American break so far, with Jeff Beck in a tribute to Les Paul, and how life for her and her band (including husband Darrel Higham) of three years has changed… 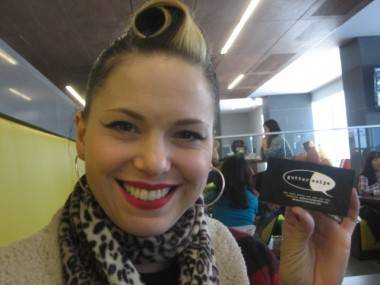 Imelda May: Ehm, we’re pretty much about the same. We just carry on doin’ what we’re doin’. Things already went mad for us elsewhere, in Ireland and Spain. And in England, too. In a way it was lucky that we’d already experienced going a little bit crazy, so it prepared me [laughs].

Shawn Conner: I was reading something you wrote about the Grammys,Â and I thought the thing she’s not mentioning is the Irish whiskey and glass of Guinness she had before.

IM: I didn’t. You can’t, not if you’re about to… that would be the last thing you’d want to do.

SC: Was that a lot of preparation?

IM: Meself and the band and Jeff had done a gig together in the 02 in London, so that’s where the idea of the Les Paul tribute came up. They wanted Jeff to perform because he was nominated for a Grammy. I’d already done the backup vocals for the gig we did, but we did them in a hurry. The Grammys were so fast I didn’t have time to redo them – we only got a week’s notice.

IM: We were on the plane early the next mornin’, and back home. I was lying in bed thinking, “Did I just imagine all of that?”

SC: Who did you meet at the after-party?

IM: Everyone’s asking me and I have to say I don’t have an exciting answer. I s’pose you could say we snubbed the official after-show party. People were sayin’ it wasn’t the place to go but that wasn’t the point for us, the point was they wouldn’t let the crew in.

They’d only let myself and Jeff and Darrell and Jeff’s manager and my manager. And there were more people, the tour manager, the guitar tech, the drummer and the bass player, who were fantastic. We all thought that was no on so we went to some after-show party we heard was good and that was boring as hell, just people networking, business business business.

So we went back to the hotel and Green Day and the Kaiser Chiefs were having a party, that was packed in there. We ordered a bottle of Champagne and ordered a bowl of fries and had a good laugh at ourselves. 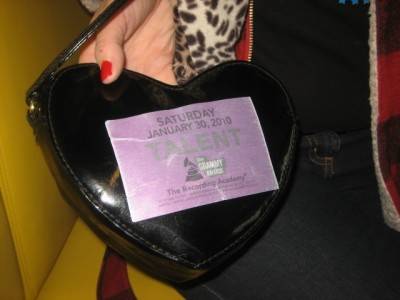 It really happened – Imelda May played the Grammys!

SC: You mentioned the 02 gig, is that where that video of you and Jeff Beck performing “Walking In the Sand” is from?

IM: Yeah. A lot of the songs we do together seem to be conjured up in his kitchen.

SC: Does he have a nice kitchen?

SC: Does he cook?

IM: I’ve never seen him cook. His wife Sandra is a phenomenal cook. So we just sit there drinkin’ tea and jamming away and the radio was on and there was some, I think we got talkin’ about Phil Spector and the girl groups like the Shangri-Las and I said “Do you remember that song” and he goes, “That’s one of my favourites!”

He started playing it and I started singing and neither of us could remember the end of it. Then we got it together for the 02 Indigo gig. We had a rehearsal the day before and it was like a jam session, really. And it sounded good, so it went onto the setlist.

SC: You must get lots of people, like music nerds, always suggesting obscure rockabilly types to you all the time.

IM: Yeah, and I love that. I love hearing new stuff.

SC: You’ve got the fantastic ’50s vintage style. If I was to walk into your house would it have retro decor as well?

IM: It’s a mixture of old and new, I’m not going to live completely in the past. We have the old ’50s bar, a kidney-shaped table.

IM: Gorgeous. Me husband bought it for me in Camden Town. I remember looking out the window and seeing him struggle with it up the road. It has gold flecks in it and pictures of shakers and cocktail glasses, with lights inside. I love the ’50s thing, because even though they’re old-fashioned now they were futuristic at the time. I love the abstract patterns and the atomic stuff on them.

SC: Do you have a fashion idol?

IM: No. I just kind of mix and match and make do as I go along. But I do love the clothes in the old movies. Even now today they stand up and look so cool. You see Marlon Brando in The Wild Ones and you think, he’s just so cool. Last night when we arrived in Vancouver we found a shop full of DVDs and I bought some film noir stuff. I love all that, bad girls, and they’re all murderers. I love Jayne Mansfield in The Girl Can’t Help It, her dresses are fabulous in that. Bettie Page.

SC: Do you have a favourite classic movie actress?

IM: I do love Bette Davis. She can play anything.

SC: When I was listening to the album two things jumped out at me. I heard the Pretenders, Chrissie Hynde‘s rockabilly side. And then there’s a guitar solo in “It’s Your Voodoo Workin” that sounds a little like Steely Dan. Is he [Darrell] a Steely Dan fan?

IM: No, he’s not, but I’ll tell him that. It’s funny though you got the Pretenders, the next album we’ve just finished mixing and will be out in September in the UK, there’s more of that influence. I love the Pretenders. Even Blondie went down that road for awhile, the Cramps, the Clash.

They weren’t dated – that’s the thing I don’t want to do. I love the old styles but I want to do them for now. I do want it to stand up today as well, and I love how a lot of the bands I just mentioned did that. It has the passion of the old stuff, but it stands up today.