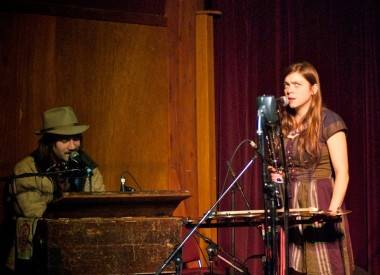 St. James Community Square (better known as St. James Hall) is a quaint, wood-lined hall with a moderately raised stage in the Kitsilano neighbourhood, and as such provided the perfect, complementary setting to the Low Anthem‘s Vancouver show.

Opening the evening was one of Toronto’s gems, Timber Timbre, who adequately prepared the mood of the evening with acoustic folk songs laced with a blues-y disposition.

The remainder of the show felt substantially as if we were looking through a sepia-toned lens, as if St. James Hall had been transported back to 1885, to one of the southern states. Opening its set with “Ticket Taker,” the Low Anthem’s members made use of old-fashioned instruments such as a pump-organ, accordion, and crotales, a percussion instrument also known as antique cymbals. The Rhode Island band’s folky, Americana vibe was irrefutable, and helped create the impression that the audience was part of an alluring collector’s item.

Ben Knox Miller, the group’s lead, provided strong vocals, some of which were falsetto, as in the group’s most recognizable song, “Charlie Darwin”, and sometimes switched to harmonica. The relaxing set was a demonstration of the band’s creativity and universality towards instruments, as all members shared bass, guitar, and drum duties. Jocie Adams was particularly remarkable on the aforementioned instruments as well as the clarinet and the crotales, and provided sweet, melodic harmonies in unison with stand-up bassist Jeff Prystowsky.

Reinforcing the band’s unique qualities, Miller told the audience to call the cell phone of the person they came with to hear “a lovely sound.”Â  After the second chorus, while the rest of the band continued playing, Miller started whistling as he pulled out two cell phones, called one, and held them close together. The emitted sound was winsome, sounding like birds or ethereal, American Civil War spirits.

If any in the attending listeners were not already fans of The Low Anthem, one would surmise that the band acquired many more on Tuesday evening. The band, having just finished tracking their third album, delivered a soothing, olden evening sometimes containing meatier, visceral songs; the remainder of the ballads being haunting lullabies, momentarily giving life to the ghosts residing in every soul in the old hall.