After last night’s performance all I can say is: wow.Â Wow.

Jon Birgisson, akaÂ JÃ³nsi, akaÂ the lead singer from Sigur Ros, played in Vancouver for the first leg of his North American tour. If you didn’t see him last night, you’ll really, really want to see him perform again tonight.

@cheetahchomps: But JÃ³nsi!! AHH! There’s this screen, with a deer and a wolf and an owl and then ants and then a snowstorm and GAH IT IS TOO COOL

– instead of the Icelandic and Hopelandic we come to expect from a Sigur Ros record, most of the lyrics inÂ JÃ³nsi’s solo debut effort,Â Go, are in English

Let me shift into present tense for a quick recap: band members arrive onstage in the gloom of night. Owls fly and wolves chase deer, leading us into the next song as floodlights reveal the remains of a ruined house cradled in the heart of a forest. AndÂ JÃ³nsi himself, dressed all in white and wrapped in coloured rags, backlit by the perfectly timed footlights fanning out, flowerlike. Whistles and wolf call sound effects echoÂ the effect of a gently decaying house, something warm and bright unfurling in your belly as you become more absorbed in the show.

People dancing in the aisles, shivers up and down the spine, scalp prickling as JÃ³nsi et al effortlessly conjure imagery from the songs and throw them up larger than life on the backdrop. In my notes: “so haunting omg omg omg omg omg” trailing off… and JÃ³nsi in his colourful garb, moving with birdlike grace from instrument to instrument, band members following suit as he spins one unearthly tune out after another. 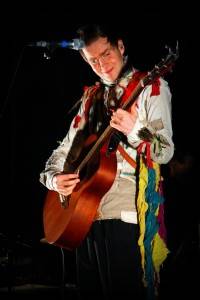 “Around Us” is a personal highlight as JÃ³nsi starts seated at the piano and slowly draws us in for a stomping… a fantastic… all this time I’m scrabbling for words that accurately convey the wonder of the night. Apparently in my notes I’ve written “the song crescendos into something misty and bright” but it’s hard to sift through the scrawl of overlapping adverbs and find something coherent. There he is, hunched over the mike, coloured rags an imitation of tropical bird wings, then he’s down on the floor as the vocals distort and break down until suddenly he ends on a clear, clean line.

And then the encore. Three songs in quick succession, muted applause, a kaleidoscope of light dancing across the crowd as an audience member shows his appreciation with homegrown lasers. Then JÃ³nsi reappears wearing an enormous rainbow headdress–true plumage! The crowd roars its approval, JÃ³nsi hunched and swaying from side to side, a tropical bird monster (in my notes: “omg omg omg”). Behind the band the backdrop skitters with a sea of ants carrying the detritus of the dying house out into the forest. Suddenly there’s a storm, a snow storm, a light storm, the band plays on unperturbed but JÃ³nsi is swaying and bending under its force and the song builds to its climax and then silence.

The stage clears. We cheer. The band returns. The crowd rises out of their seats to give JÃ³nsi and friends the standing ovation their performance deserves. I wipe away tears (!) and wonder if I’ll be able to see them play again tomorrow night.

@MelanieKimmett: JÃ³nsi has truly ruined any future concert experience for me! Tonights show was so magical that I just bought tix for tomorrows show!

3 responses to “JÃ³nsi at the Vogue Theatre”