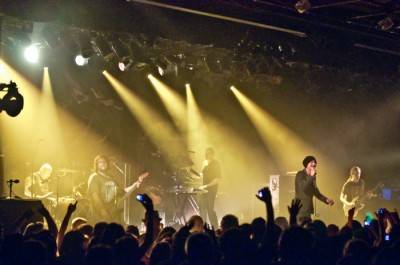 H.I.M. came to Vancouver on their current North American Tour. With a tremendous light show, the Finnish band rocked through a high-energy 90-minute set that had many in the audience joining in. I was not one of the concertgoers singing along with lead singer Ville Valo, but I danced all night long.

Since I didn’t have my fingers crossed hoping to hear my favorite song like many did, I was blown away by H.I.M.’s rendition of Chris Isaak‘s “Wicked Game”. I was a bit surprised that this rather heavy rock show didn’t feature any prolonged solos. Oh well. It was still a blast from start to finnish (pun intended).

The Commodore was filled to about 80 per cent capacity and it was almost entirely die-hard H.I.M. fans. I have yet to go to a concert and see more of the band’s merch in the crowd. Whether it was a tour shirt from this current tour or one from the past, a generic band tee or Heartagram fingerless gloves, I felt out of places for not having anything. The fact that I was wearing my “LISTEN TO ASHER ROTH” tee shirt didn’t help me fit in either:

“Who the fuck is Asher Roth?”

“He’s is a white rapper. You should check him out.”

Near the end of the concert I did my typical walk-around-and-talk-to-random-people about the band thing. Two things came up more than any other point made by fellow concertgoers:

I can’t really address the first point (come to think of it, I can’t address either of them), mainly because I have never seen the band perform live before but I can defend them to some extent. They are in the middle of an extensive four-month 60-date world tour. I don’t want to make excuses, but if these fans wouldn’t have said anything I would have just thought it was a great show.

Following chants of “One more song!” and thunderous clapping and foot-pounding (also a “We won gold!” chant in reference to the men’s Olympic hockey tournament where Finland got a bronze) the band returned for another cover, Billy Idol‘s “Rebel Yell”. To once again end on a silly play on words, this song did leave the crowd wanting “more, more, more, more, MORE!”

3 responses to “H.I.M. at the Commodore Ballroom”