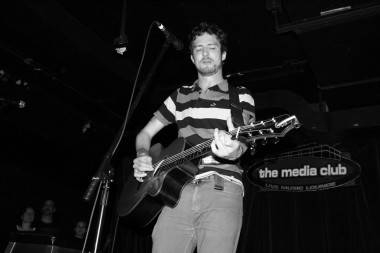 Frank Turner, already on his way to superstardom in his native England, is well on his way to achieving a similar status on this side of the Atlantic, if his sold-out show at the Media Club is anything to go by.

Turner previously came to Vancouver with the Gaslight Anthem back in September, but this was his first headlining show in the city. As I was waiting to get in, he walked past the assembled line-up, and he took the time to chat with those who wanted to talk to him. There were no tickets to be had at the door, and some disappointed people were turned away. This left me feeling that maybe something special was about to take place.

First up was Regina folk-rocker Matthew Goud, who goes by his stage name Northcote. His words painted a vivid picture of a misspent youth growing up and playing in bands in a small town on the Prairies. He threw in a few covers for good measure, including the Tom Petty and the Heartbreakers song ‘The Waiting” and Hot Water Music’s ‘Trusty Chords’, the latter of which was played with Dave Hause (more on him soon).

Next onstage was Hause, lead singer and guitarist with Philadelphia outfit The Loved Ones. He played a variety of his own songs, stripped down versions of Loved Ones songs and some covers. For me, the stand-out moment of his set was “Pray for Tucson”, a song about almost dying whilst out on tour, and realizing that life is precious. In honour of their new friendship, Goud/Northcote returned to the stage to join Hause on a fantastic, well-received cover of the Replacements’ “Can’t Hardly Wait”.

Rapturous applause and cheering greeted the headliner, and that was just for his guitar-tuning. After a quick introduction, Frank Turner tore straight into his set with “I Knew Prufrock Before He Got Famous”, and had every word sung straight back at him by the vast majority of the crowd. The audience was so loud that he had to have his monitor turned up so he could hear himself. The singalongs didn’t stop after the first song either, as Turner continued to churn out fantastic songs such as ‘Try This at Home”, “Substitute” and “Love Ire and Song”, all of which were sung straight back at him by the word-perfect crowd.

Indeed, the British folk-rocker had the full attention of almost the entire audience throughout his set; everyone was so focused on his words that at one point people tried to shush a passing police car!

Turner was full of interesting and amusing anecdotes as well, of falling over whilst drunk, riot police, ex-girlfriends, and playing to two people in Bellingham in 2006. These stories were genuinely laugh-out-loud funny, something which I have never seen in a musician’s inter-song banter before. These stories even included relevant links to the next song, even if these were as simple as “I’m jetlagged, therefore I’m going to play ‘Jet Lag’.” Turner was not devoid of the honesty of his opening acts either; songs like “Long Live the Queen” and “Worse Things Happen at Sea” came with tales from his experiences and the way they have fashioned his take on the world.

Taking time out towards the middle of his set for what he called an “intermission”, Turner did some covers. An a capella take on “Barbara Allen” was possibly the highlight of the set, and was further evidence of his real passion for folk music.

Afterwards, song requests from the audience were accommodated, although only for songs for which he could remember. He gave the impression that he could easily play all night, but the set finally had to come to an end with the fantastic “The Ballad of Me and My Friends”, which proved to be one of the biggest singalongs of the night, even allowing Turner to take a step back and let the audience do all the singing on the final refrain: “We’re definitely going to hell/but we’ll have all the best stories to tell.”

Frank Turner was the perfect showman and gentleman. I don’t think there was a single person in the venue that wasn’t affected by what they witnessed at his show. This truly was a special occasion, and no doubt by the time Turner returns to Vancouver, he’ll be playing to at least twice as many people.

2 responses to “Frank Turner at the Media Club”