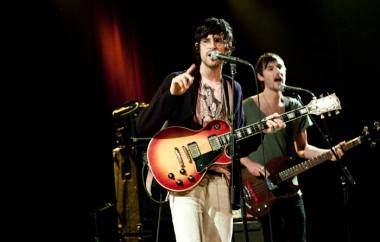 Call me oldfashioned, but I always assumed that you paid to see a gig, in this case upwards of $30, if you liked the artist, enjoyed some of the albums they’d put out, and fancied seeing how their recordings translated to the live arena.

Well, I’m gonna get on my high horse for just a sec, and am gonna proclaim that half the people in the crowd at the Devendra Banhart show the other night were nitwits – they spent so much time chatting boisterously to each other that they clearly couldn’t have given two shits about who they were seeing. Why pay to see someone if you’re then going to proceed to try and drown out their sound with your own brand of mind-numbing witticisms and dead-as-a-dog flirtations?

I felt a bit sorry for Banhart, actually. When he walked on the stage he was greeted with decent applause. But later, when he did the solo part of the set – just his guitar, his lush voice, and his exquisite lyrics – the audience got bored and started chatting amongst themselves. Getting the man’s hopes up, egging him on, and then dropping him with a heavy bump – you’re worse than my ex… Why would you wanna play an honest, hard-working musician like that, Vancouver?

I can’t understand it myself, as the solo stuff was easily the best – that was the Devendra you heard on the earlier records, and the Devendra you wished to see in a wooded glade in late summer whilst you swigged away at an organic cider, and had someone plait various summer flowers into your Old-Testament-sized beard. The Commodore is not the venue for Banhart; it lacks the intimacy that his lo-fi folk thrives upon, and he would have done a lot better to have done two or three nights in a smaller venue, perhaps the Biltmore.

So, the crowd didn’t appreciate the solo set. They did enjoy the main chunk of the show, where Banhart’s backing band, The Grogs, gave the set depth, energy, and enough amplified sound to drown up the rude bastards at the back. People were clapping, waving lighters, cheering – all the signs that tell an artist that people are enjoying the show: just to confuse Banhart a wee bit more I presume. Paradoxically, I thought that this section was a bit run-of-the-mill – the band was tight, yeah, but they didn’t really offer me anything innovative, and certainly nothing worth the $30. When you go to see Devendra Banhart, you go to see him, as he’s the unique musician.

As it was, I didn’t feel he was very unique on the night. I was left with very few memories of the show, and overall a sense of being cheated out of a cracking gig because the crowd didn’t give the artist the respect he deserves. To all those people after the show complaining of Banhart not playing an encore – I tell you, it’s your own damned fault.

5 responses to “Devendra Banhart at the Commodore Ballroom”