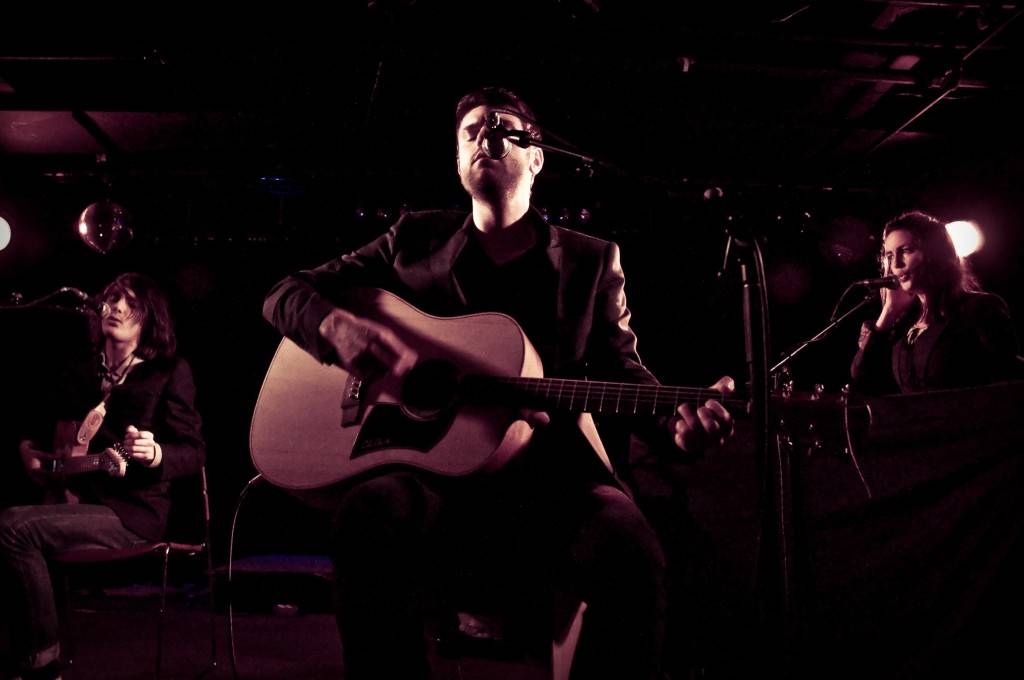 After being elbowed and rubbed against by all the tired and pissed-off commuters on the B-line for half an hour, all I wanted was a tall drink.

As soon as I entered the Biltmore, I realized that most of the crowd had the same idea. The usual litter of scenesters, teensters and drifters had been replaced by cliques of 9-to-5ers unwinding over caesars. Searching for someone with a PBR in tow would have been as challenging as spotting Waldo.

I arrived just in time to see Kinnie Starr hit the stage and introduce herself in a beatnik-poetry-slam fashion that warranted a decent round of snaps. Barefoot and dressed in jeans and a peasant top, her unpretentious presence set a low-key tone for the evening.

The Vancouver singer/songwriter/rapper successfully pried her audience away from their tables to sway along to her brand of “mellow love songs”, as she herself described them, many from her newly released record, A Different Day. True to her word, her tender set opener “It’s All You” showcased her soulful and rustic vocals, similar to the stylings of mainstream female songwriters like Sara Bareilles and Natasha Bedingfield. This dreamy start was soon jolted by the distorted guitars and grungy performance of the record’s title track.

Switching up the tone of the evening once again, Starr’s bluesy, ’70s rock guitar playing on “Some Sun” carried more gloom than its title would have indicated, but was probably her most vulnerable and sincere performance of the evening. Noticing the approval and appreciation on her fan’s faces, she extended her gratitude, sputtering “Fucking cheers to learning how to listen in 2010.”

Starr also injected some hip-hop flavor to the program. (Her side project Roller Derby explores her old school influences.) With the audience’s synchronized stomps and claps, she laid down some carnal rhymes such as “Kiss it, kiss it all around/Before you go downtown” that had the women hooting and hollering, and their male companions blushing and uncomfortably squirming.

She then invited the enigmatic Michael Rault to join her on the stage. Hailing from Edmonton, the blues guitar wunderkind lent his talents on Starr’s playful rendition of Run DMC’s “You Be Illin”.Â  He added a necessary layer of bass to “Free”, a tender, acoustic ballad that led into her final song, “Bonfires”. The lyrics compared large fires and love, accompanied by frantic power chords with a distorted effect that captured the crackling of embers.

Left nice and toasty from Starr’s set-closer, the audience seemed to feel a sudden surge of energy as Jay Malinowski proceeded into the solemn number, “Animal”, a definite departure from the upbeat roots rhythms he has been known for as the frontman of Bedouin Soundclash. His signature raspy vocals still prevailed behind the polished blazer and slicked back hair.

The folk, minimalist direction he has taken with his record Bright Lights and Bruises was matched by the sparse arrangement of the stage. Resembling a musician’s toolshed, it was equipped with the bare essentials; a few acoustic guitars, a piano, mini amp, and a cajon with a kick pedal.

This probably wasn’t far from the set up he had as he wrote the record while in full view of the Pacific Ocean. In fact, Malinowski credited the vast surroundings of BC’s playground as a major influence for his music, even introducing “Santa Monica” as a tribute to his hometown of Vancouver. The pulsating drums and simple melodic chord progression would have been entirely appropriate around a campfire in the great outdoors.

Similar sentiments could be heard in “There’s a Light”, which allowed Malinowski to experiment on the piano as opposed to his normal guitar post, a luxury he was denied when performing with Bedouin at GM Place, he joked. “Into Fire” musically painted the crashing waves at Tofino through a reverberating bass effect that ebbed and flowed throughout the song. The environmental influences heard throughout his set firmly identifies Malinowski as a regional Canadian songwriter.

For the most part, Malinowski’s solo numbers had a calming and lulling effect on the audience, with traditional folk-sounding tracks like the slowly chugging “Life is a Gun” and the uplifting “Remembrance Day”. But the heavy, bouncing strumming on “Loving Hand” was executed with aggression, as if in an attempt to shut up the few yackers in the room.

At one point in the evening, the disgruntled singer sternly asked the group to “shut the fuck up and continue their conversation at Milestones.”Â  This amused most of the room, except for his parents, who happened to be sitting right next to me. Regardless, they beamed with so much pride throughout the evening that I was shocked they didn’t break out the yearbook pictures.

Everybody’s favorite ringer, Michael Rault, returned onstage to help his friend out with an interpretation of Bob Dylan’s “Oh Sister”.Â  Starr also provided backup vocals for this portion of the set, and the respect and admiration between all three was apparent through their fluid harmonies.

Malinowski ended the evening with an unnamed song that should squeeze its way into the next Bedouin Soundclash record. Returning to a bouncy, dub sound seemed to comfort him, like a reggae safety blanket. Overall, Malinowski’s diverse composing skills were made clearly apparent over the course of the evening. His risky direction has already led him to a new frontier of fans.