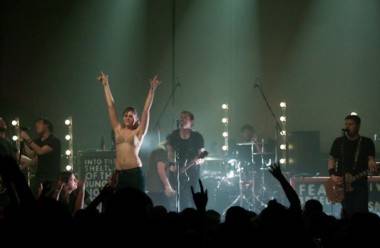 Review and photos – Against Me!Â at the Rickshaw Theatre, Vancouver, March 2 2010

Against Me!, whom I’d been wanting to see ever since hearing “Thrash Unreal” for the first time a couple of years back, were on the second show ofÂ  a tour that, except for the first couple of dates, sees the quartet (augmented by a fifth member on keyboards and guitar) opening for Billy Talent across this great land of ours.

One of these, the super-catchy “I Was a Teenage Anarchist”, opened the show; an hour later the band ended with “Thrash Unreal”, then came out for an encore featuring mostly songs I didn’t know, so I assume they’re older tunes. Also notable, besides New Wave‘s title track, is another new rocker called “Because of the Shame”.Â  According to Gabel in a pre-show interview, the tune is a sequel of sorts to “Thrash Unreal” in that it’s about the same person.