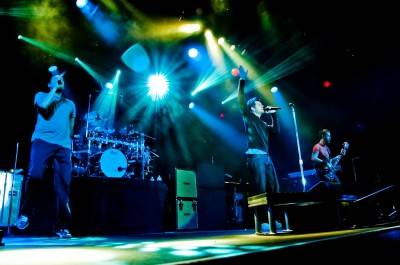 Review and photos–311 at the Commodore Ballroom, Vancouver, Mar 2 2010

When I found out that The Wailers were the opening act of the evening, my first thought was, “THE Wailers”? Legends in their own right, they put on a performance that did not merely warm up the crowd, but had them steaming. That’s what all the clouds of smoke floating on top of the audience must have been.

As their current lead singer approached the stage and saluted the audience, his dreadlocks, formerly twisted on the top of his head, automatically unfurled.Â  I took this as a surefire sign that they were ready for business. Â What proceeded was a hit parade of party playlist staples such as “Stir it Up”, “I Wanna Love Ya”, “One Love”,Â  and “I Shot the Sheriff”, which had me regretting that I left my skanking shoes at home. The audience, comprised of everyone under the Rasta rainbow, had no problem mimicking the gyrating hips on the stage, an awkward and thoroughly amusing sight for any spectator.

From the Jamaican-themed spotlights, to the velvety voices of the Wailers’ back-up singers, to the pulsating bass lines of band pioneer Aston “Family Man”, the show provided a fun-loving and vibrant environment, uplifting those suffering from the 17-day hangover left from the Olympics.

The Wailers’ peaceful and positive aura had completely rubbed off on their fans as they performed “No Woman No Cry”. As the organ notes filled the room, the audience joined the band in singing “Everything’s gonna be alright” with such resounding conviction that it must be true.

The Wailers are currently on tour until April, celebrating 40 years of playing music that rarely hits a sad note, as proven by songs such as “Jammin’” and “Don’t Rock my boat”. However, there is always a pang of grief when thinking of the absence of Bob and Carlie from the current line-up. The band has decided to pay it forward by setting up a global initiative to eradicate world hunger, called I Went Hungry. Their camaraderie and communalistic outlook obviously extends far beyond the stage.

It is a bold move choosing to follow a band as historic as the Wailers. But 311 completely switched up the nostalgic tone of the evening and put on a vigorous show that did not pale in comparison. The moment the lights dimmed and distorted chords blasted from the speakers, it was clear we weren’t in Jamaica anymore.

Fans who had come to the show expecting to hear the romantic air of songs like their breakout hit “Amber” would have been surprised, and possibly disappointed, by the Omaha natives’ decision to stick to their brand of punk-metalÂ  anthems infused with a generous helping SoCal hip-hop.

The band is currently promoting its latest, Uplifter, which offers hints of their skank roots, but moves closer in the direction of punk-core. Set-opener “Jackpot” displayed this stylistic departure. Lead guitaristÂ Tim Mahoney, switched to a clean effect for the alternative sounding “All Mixed Up”, which had SA Martinez sweating bullets as he dashed around the stage, rapping about his dream girl.

Sounding like a wired version of Q-tip, he and lead singer Nick Hexum, ran circles around the stage throughout the set with an enviable amount of energy. Hexum’s vocals leaned towards being monotonous on the verses of “Freeze Time” and “Mix It Up”, but his constant fist-pumping and trademark twirls made up for this weak spot.

That, and the fact that he’s no disaster to stare at. He shines in the seductive and subdued tracks “Purpose” and “Beyond the Gray Sky” when he is able to take his time through the melodies instead of rushing through them like a bullet train. 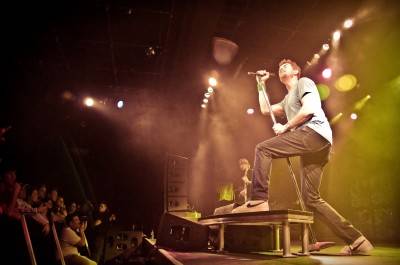 Martinez and Hexum passed the spotlight over to P-Nut, allowing him to delve into an impressive bass solo on his 6-string. His musicianship can’t be doubted after his display of slapping technique and his precise use of harmonics.

Drummer Chad Sexton also had the opportunity to showcase his prowess in his own interlude, supported by an expanded rhythm section comprised of Mahoney and Martinez banging on cowbells and gongs. Rest assured, each member has earned his keep in this unit.

Most of the songs that followed seemed to meld into a medley of fast-paced hip-hop fortified with power solos and record scratching. The crowd had weeded out by the time 311 had reached their final song of the encore. This is probably due to it being a Tuesday night, but quite likely because no one could keep up with the serious efforts on the stage.

One response to “311 at the Commodore Ballroom”