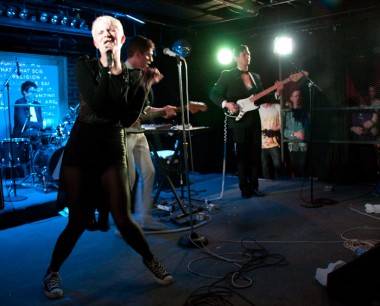 Review and photos – Yacht at the Biltmore Cabaret, Vancouver, Feb 19, 2010

In the past week or so, the sea of red-and-white patriots have overwhelmed the city, singing, well more like belching out, the Canadian national anthem on Granville Street on an hourly basis.

Imagine my shock to find the turnout at the Biltmore completely untouched by all the Olympic excitement. The sea of “Believe” T-shirts and famous red mittens were replaced by horn-rimmed glasses, plaid, oxfords and more plaid. Here it felt like a return to the pre-Olympic era; a time when a beer cost less than eight dollars, Richmond had no nightlife, and Costco ran at regular hours. 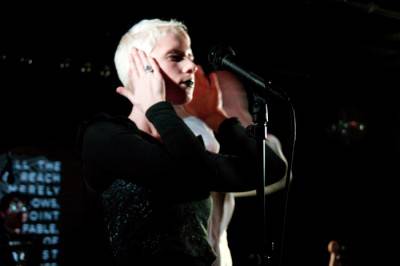 All this changed when Yacht hit the stage, saving normalcy for another evening. When the velvet curtains opened, fans flocked to the dance floor like overeager kids chasing an ice cream truck. The Portland ensemble began their adrenaline-charged set with “Ring the Bell”, an amalgamation of tribal beats, electronica and hip hop that had Claire L. Evans, half of the performing duo, break into a futuristic interpretive dance and hooting bird sounds. It was definitely a kooky yet winning start to the first show of Yacht’s Canadian tour.

Jona Bechtolt, dressed head to toe in white, completes the musical partnership, while his cohort slithered through the stage in a black jumpsuit, in stark contrast to her ice blonde hair. They resembled a futuristic ebony and ivory, spreading their philosophies on collectivism and liberalism through the blips and bloops of their technology driven tunes.

The evening saw the pair sampling some of the most memorable beats in old school hip-hop history and mashing them against their eccentric punk/neo wave/industrial sensibilities. The tune “I’m in Love with a Ripper” paid homage to Run DMC and New Order, simultaneously, and showcased Bechtolt’s virtuosity on the synthesizer.

The duo followed this crowd-pleaser with “It’s Boring You Can Live Anywhere You Want”. At this point, the audience had nowhere to go but up, and that they did. The song had everyone jumping up and down for the entire three and a half minutes of pre-recorded clapping sounds, set to a catchy, ska bass line.

Evans commanded their movements as she whispered “A little bit softer now”, bringing to mind the Isley Brothers’ “Shout”. It was just another taste of the musical samplings Yacht, currently promoting its latest record See Mystery Lights, had to offer.

Taking a much deserved break from the non-stop action, Evans and Bechtolt decided to lead the audience in a guided meditation or call-and-response, of sorts. The entire room began spewing spiritualistic phrases such as, “The world may end in my lifetime, but my energy will continue” and “I will love, and I will not attack”. This all added to the performance aspect of the show, and presented the idealistic and communal outlook of the band members, but I probably won’t be joining in their eccentric congregation any time soon.

Siphoning more from popular culture, Yacht regaled the crowd with “B Side Suicide”, a song that pondered Kurt Cobain’s suicide while indulging in euro-pop melodies. Their next pick, “Summer Song” seemed to play off of the main riff from the Ghostbusters theme, so near and dear to any ’80s kid’s heart. While Evans screamed “Move your feet to the summer song”, Bechtolt twirled the mic into the air, lassoing all the energy in the room and guiding his fans in what felt like a techno-robics class.

Sweat bands, leg warmers and Spandex would have been a welcome sight at this point. Without a doubt, Yacht has a presence that translates much better in a live arena. Yet, while the theatrics were thoroughly entertaining, the music itself verged on being over-processed and slightly grating. Listening to them on a Sunday drive would do these performers very little justice.

In the final song of the set, Yacht had any remaining crowd members on their feet for “Psychic City”, a fun, infectious party anthem that would have any wallflower busting out some spaz-tastic moves on the dance floor. Air kicks, fist pumps and grunts should be compulsory whenever listening to this gem. They returned for an encore with odes to record stores and nausea and urging their new friends to “Take care of each other out there”.

Yacht proved to be amazing performers and dutiful hosts, making sure that every one of their guests had their dance card filled by the end of the evening.