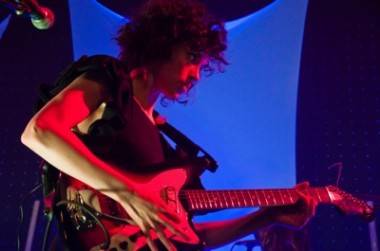 There’s something a little unreal about Annie Clark. Thin, petite, with big doe eyes in a sharp fox-like face under an explosion of black curls, Clark – who records and tours under the St. Vincent moniker – is a triple threat (quadruple if you count her looks); a talented singer and songwriter and a heckuva guitarist.

Like Nels Cline, a Bay Area innovator who also plays with Wilco, the Dallas-raised 28-year-old plays guitar with her body, throwing her whole 5-foot-and-change frame into punctuating chords and skronk-y solos and outros. Always tasteful, never show-offy, Clark playing her instrument is a pure pleasure to watch. 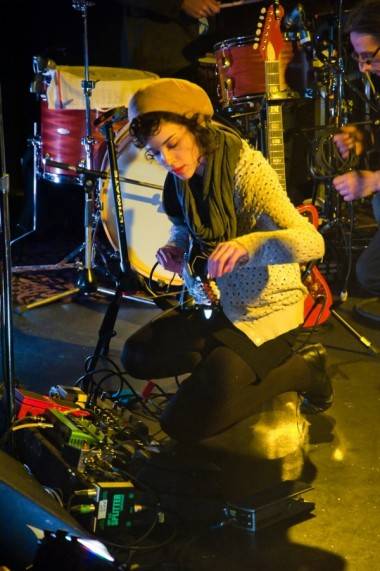 After the show, could anyone in the sold-out Venue have picked out any of the rest of the St. Vincent lineup – four guys, on drums, bass, violin and sax/woodwinds – from a police lineup? Doubtful. All eyes were on Annie as she led her quintet through the tunes from her two albums, Marry Me and her latest, Actor.

The best songs from Actor, a distinguished 2009 record, were highlights – “Actor Out of Work” is a pop-rock hookfest, and “Laughing With a Mouthful of Blood” (for the encore – check out the hilarious video below) has an irresistible melody. But Clark’s guitar lines and the songs’ arty, occasionally Talking Heads-like rhythmic spasms kept the show on track throughout.

Midway through the set, Clark performed a delicate (no acoustic needed; Clark easily kept the tune’s melancholy mood on her electric) version of Jackson Browne‘s “These Days”. In her vocals, the song was an obvious tribute to German pop chanteuse Nico, the Velvet Underground singer who made the song her own on her 1967 album Chelsea Girl. 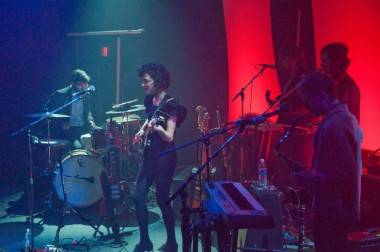 Wildbirds & Peacedrums, last seen in these parts nearly a year ago to the day opening for fellow Swede Lykke Li, were even more amazing on second viewing. The duo’s name completely describes its music, with Mariam Wallentin‘s voice the wild bird and Andrea Werliin‘s kit the – well, you get the idea.

Occasional pre-recorded bits aside, Wallentin and Werliin created a storm of sound that threatened to steal the show from St. Vincent. Wallentin has a huge, powerful voice that became more soulful as the set went on, and at times the tunes seemed like a new kind of free-form soul music. From where this reviewer stood, Wallentin’s words were all but inaudible, but the occasional chorus that emerged from the tumult proved that love is still the drug, even for experimental indie-rock duos from Sweden. 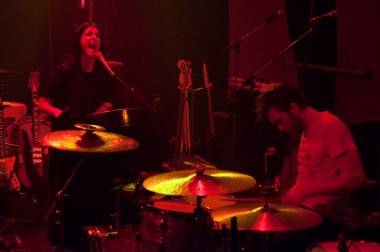