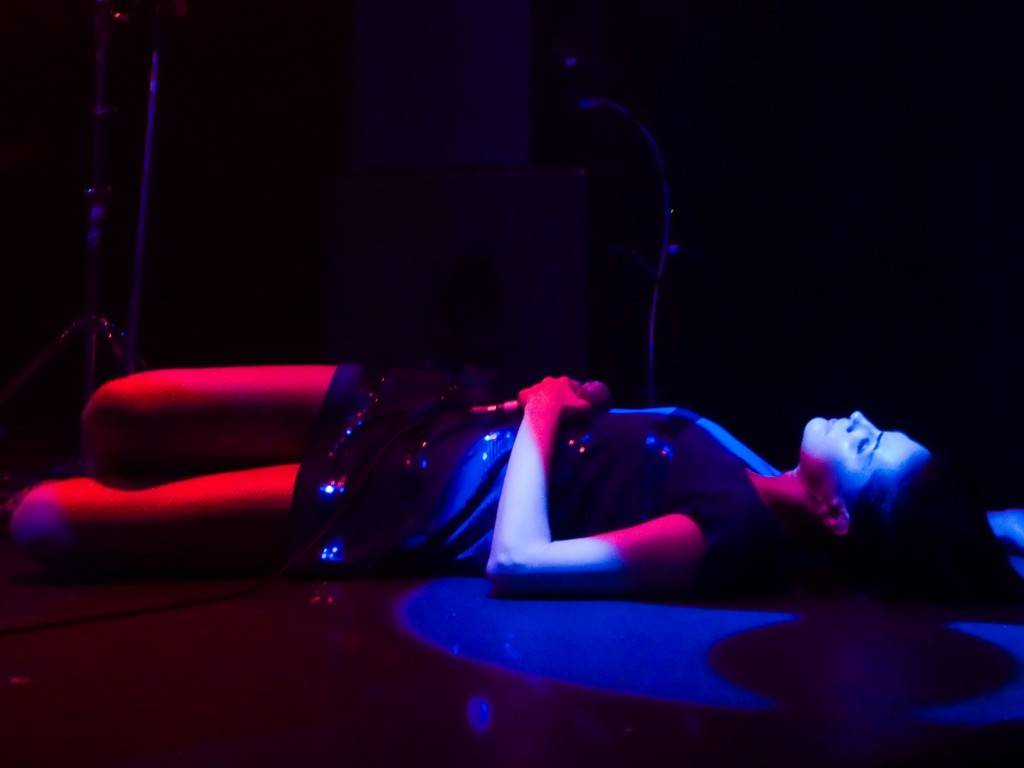 I have always hated line-ups, as most people probably do. However, they are always the best indicator of where the best music, restaurants, drink specials, and bargains are in the city. Not to mention, the cleanest bathrooms. As I approached the Venue, the crowd was already forming around the block, the staff was screaming “sold out!” and “at capacity”, there was an overwhelming group of ticket seekers disappointed by a lack of scalpers, and I could not wait to get in.

Scanning this evening’s audience, there was an impressive international turnout, matching the Olympics hoopla out on Granville Street, and striking a contrast between the barely legal beer slingers and the casual wine sippers. This eclectic group immediately mirrored the musical feast that the French imports, Nouvelle Vague would provide for the evening; a series of cross-generational, culturally diverse and unexpected renditions of punk and new wave classics that were collecting dust in karaoke lounges and ’80s night clubs.

The band, including co-founder Marc Collin (Olivier Libaux, the group’s other mastermind, isn’t on this tour) discretely scurried over to their stations, allowing for the grand entrance of their latest singers and muses, Helena Noguerra and Karina Zeviani. The band recently set out on a coast-to-coast North American tour promoting their newest record, NV3, following their highly acclaimed and commercially popular sophomore record, Bande a Parte.

They boldly began their set with a haunting and minimalist version of the Police’s “So Lonely”. Noguerra captured every single audience member’s attention with her low, arresting voice and aggressive stature. What followed was an up-tempo cover of Depeche Mode’s “Master and Servant”, delivered in Zeviani’s playful and flirty vocals. Dressed in a striped electric blue sequined dress, paired with a beret and torn fishnets, she was every French stereotype personified and magnified. In other words, she was devastatingly charming.

The band fell into their bossa nova groove with a version of the Buzzcocks’ “Ever Fallen in Love”, at which point Zeviani broke into a Latin Robot, a dance move that re-appeared throughout the evening. Nouvelle Vague continued their tour of rock ‘n’ roll history with a ’60s inspired version of XTC’s “Making Plans for Nigel” reminiscent of an Everly Brothers ballad. The tune showcased the seamless harmonies of the singing duo.

The band truly took care of business with a burlesque interpretation of The Cramps’ “Human Fly”. Soon, the Venue became a beehive for Nouvelle Vague’s newly formed colony. The entire building literally buzzed as Noguerra growled into the microphone and slinked through the stage, proceeding into a kazoo solo. I kid you not. This type of experimental performance does not always work, but when it does, it is extremely impressive.

In an effort to rekindle the passion in the evening, Zeviani challenged the audience to give her the best “fuck” she’s ever heard. Zeviani added, “We want it bigger and longer”. This sexual teasing continued as the pair lovingly slow danced onstage all through the night.

When they were pleased with the level of volume in the room, and apparent tension, they leaped into a vigorous version of the Dead Kennedys‘ “Too Drunk to Fuck”, leaving Zeviani an inch away from hanging off a chandelier. In an effort to subdue the crowd, Noguerra then took her seat on the front monitor, and in her best impersonation of a Kindergarten teacher, led the audience in an acoustic sing-along for the Sex Pistols’ “God Save the Queen”. Ironic, disturbing and incredibly amusing, it was definitely a sight to be seen.

Other standout performances from the evening included a jazzy-beatnik version of Depeche Mode’s “Just Can’t Get Enough”, with the two frontwomen frantically shimmying, and my personal favorite, a revitalized Western cover of the Talking Heads‘ “Road to Nowhere”. The performance simply invited you to pull up a seat at a saloon and down some whiskey. Their rendition of the Violent Femmes’ “Blister in the Sun” truly took off with the crowd. The surf, rockabilly attitude they added to the punk classic could have made it a hit on Dick Clark’s American Bandstand or the background music to a choreographed dance sequence for a Frankie and Annette picture. The group’s ’90s, post-grunge, take on the Specials‘ “Friday Night, Saturday Morning”Â  eventually led into a Charleston/reggae vibe, and erupted into a punk anthem, evidence of the band’s virtuosity and unpredictability.

In a philosophical moment, Zeviani let us know that their performance was coming to a close, stating, “Everything’s gotta end you know?” Like an encouraging choir leader, Noguerra’s face completely lit up as she led her faithful followers in singing a soulful and ambient translation of Joy Division’s “Love Will Tear Us Apart”.

For its encore, Nouvelle Vague quickly reappeared and gave everyone their money’s worth, and then some, with a dramatic cover of Bauhaus’ “Bella Lugosi’s Dead”. The threatening drum rhythms and Noguerra’s vampiric presence momentarily transformed the stage into a slasher film.

The band ended with P.I.L’s “This is Not a Love Song”, but this was not a description of the sentiments in the building, by any means. Nouvelle Vague charmed and won over the Vancouver crowd with its originality, candor and exciting bag of tricks, and proved it’s not so much a cover band as a musical resuscitation machine.

2 responses to “Nouvelle Vague at Venue”