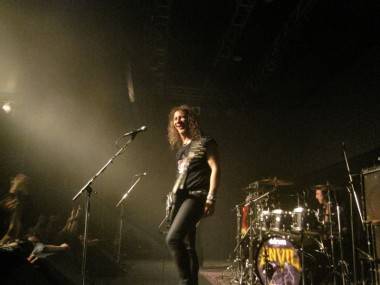 If you haven’t seen Sacha Gervasi’s documentary Anvil! The Story of Anvil, you probably should.

The unlikely underdogs proved winning subjects of a documentary that was an audience favorite at festivals around the world and would have been a sho0-in for a Best Documentary nod at this year’s Academy Awards had the producers (according to my very well-placed sources) not made the ambitious yet ill-advised decision to enter it in the Best Picture category instead. (As an aged Crusader once said to an ambitious yet ill-advised Nazi who drank from an unholy grail, “You chose… poorly.”)

Metal, let alone heavy metal (as suggested by a band with a name like “Anvil”) is definitely not my thing, but the opportunity to catch a screening of the film followed by a performance by the band themselves was too much to pass up. How often does a band open for themselves? You can’t get much more rock ‘n’ roll than that.

The sold-out, sausage-heavy crowd at the Venue was enthusiastic from the get-go. My initial thinking was that the majority of the audience would be those who were, like me, wanting to check out the band because of the popularity of the film. I was wrong.

Based on the number of well-fed, Anvil-clad men around me whose cheers and hollers during the film (guitarist and singer Steve ‘Lips’ Kudlow getting aggressive with a promoter who won’t pay him, drummer Robb Reiner’s tour of his scatalogically-inspired toilet art) was balanced by enthusiastic boos for Reiner’s sister, Droid, ranting about Anvil’s bleak future and insisting her brother needs a “reality check.” It’s a good thing Droid wore sunglasses during filming, lest she ever find herself at an Anvil show.

The band’s music all started to sound the same to me after about 20 minutes – like I said, it’s not my thing. That being said they were technically on-point and sounded tight, which is exactly what you’d expect from the demi-gods of Canadian metal. They were listenable and I was relieved to not have that wretched feeling brought about by the dark throttles of death metal; Anvil are more of a party band.

And to be clear, this was a party. Currently in the middle of a world tour, Lips seemed positively overjoyed to be playing for the raucous Canadian crowd with his skin-pounding best-friend Reiner, stating that his “dedication and love for playing is unsurpassed. I love seeing him smile, and you know what makes him smile?

A raging fucking crowd like yourselves!” The nature of their rock ‘n’ rollercoaster relationship, forged through personal ups-and-downs, was the centre of the film and very much the centre of their show – the energy these guys (along with current bass player Glenn Five) radiated was positively infectious and a great deal of fun to experience live.

The crowd was as entertaining as the band. I was approached and touched by more men at this show than at any other. At one point a highly intoxicated man tried to get my attention by firmly touching my arm; I ignored it until his second attempt, at which point I snapped, “Don’t touch me.”

He tried a third time and this time I gave him the index finger, “Don’t fucking touch me!” Before sulking away he said, “Take it easy. I wanted to fist bump.” A moment later his friend did the same thing to me, asking if I was “okay.” I turned to him and said, “Don’t touch women you don’t know. Think about it.”

He seemed genuinely surprised by this XX nugget, which may offer an anthropological explanation for the gender-imbalance of the audience. Later on a roadie for the band sauntered up beside me, slung his arm around my shoulder and said, “I just … I just really like you.” I suspect that in addition to my pheromones, wearing glittery, heart-shaped antenna (doodle boppers!) on my head in honour of Valentine’s Day may have had something to do with the attention. I’ll take what I can get.

Thanks in large part to the film, Anvil are now clearly living their dream – how long it will last is another story entirely, but for now they deserve to enjoy themselves. The scene of Lips’ big hair, tight jeans, studded belt and V-shaped guitar was made complete by the guy in the Anvil shirt who rushed the stage, jumped on it and flashed a one-handed devil sign before disappearing back into the sea of head-banging fist-pumpers.

By the time they Lips introduced “Metal on Metal” as “your national anthem”, the crowd of mostly middle-aged men, many of whom were introduced to metal during Anvil’s first go-round 25 years ago, were singing along and re-living their own dreams, too.