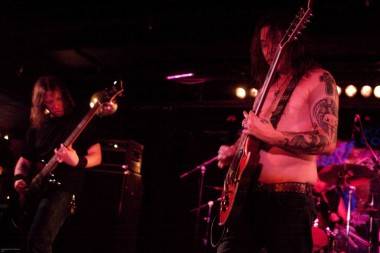 Review–High On Fire at the Biltmore Cabaret, Vancouver, Feb 10 2010

Three buck tickets for a charity show being put on by Volcom? With High On Fire headlining the Vancouver and Denver dates only? Fuckin’-A rights, Billy!

An intimate gathering, just me and 350-odd other hammerheads – many following the tour from previous dates in Nelson and Kelowna, just to get that dose of HoF – turned out in full force – in blind search of our collective grail, the Riff. Many more waited outside, hoping that a few extra tickets might possibly get released to this sold-out show. Luckily, I’d snagged extra tickets and was able to unload a few to some of the bros in line behind me.

Of course, at a show like this, ambiance is everything, and in the true-Norse-strong-and-free spirit of reclaiming a fine (cheap) malt beverage for the working man who enjoys loud raunchy guitars from sheer electronic plaid hipster doom, I and my brethren lubed up with the first of many rounds of that fine, Frank-Booth-endorsed beverage, Pabst Blue Ribbon. Friends, if there is a finer beer, Odin himself must have kept that shit for his own private stock. With unpaid-shill duties firmly out of the way, and wiping the frost from our hirsute lips, we hunkered down for a night of meaty bludgeon riffola, first up by way of Seattle openers Kandi Coded.

Sporting a fine lead guitar pedigree in Jack Endino (yes, he who produced all your favorite Seattle elpees), Kandi Coded struck those of us at the table as not just a little bit HÃ¼sker DÃ¼, some Uncle-Anesthesia-era Screaming Trees and maybe just a tad Drunk Injuns for that extra-crispy skatepunk flavour that the dudebrahs eat right up.

Tasty riffy, more garage- than -a-delic, Kandi Coded pounded it out and especially won me over with the track “Dead End Road” because I heard hints of Love Battery’s “Highway of Souls” (Endino-produced, of course) Â in the spiraling riff that the band kept hitting me over the head with; much the same for the aggro-pop of “Steve Seevers”.Â  Of course, as openers, their set was too short.

But, KC’s short set was simply sharpening us up for a bit of dirty twenty-to-one, as it were – next up in the form of Wilmington, North Carolina’s ASG.

Barnstorming the Biltmore’s postage-stamp stage like some sort of panzer-division three-way bastard-love-child of Fu Manchu, Thin Lizzy, and Jim Dandy’s codpiece, ASG were the dark horse of the night and firmly settled the hash of the major-ragers who were, by all accounts, genuinely pleasantly surprised by the ear-splitting set from this seemingly from-out-of-nowhere band that’s actually been around since 2001.

Having only had the chance to check out their MySpace once prior to the show, my lack of familiarity with their material didn’t stop my compadrÃ©s and I from liberally throwing the goats and hooting PBR-sodden Dimebag-isms (OOOHHHHYEAAAHH!) at the four-piece left and right between (hell, during) songs. Absolutely slaying lick-after-lick that left me hung-overly kicking myself the next morning that I hadn’t bought their vinyl instead of those few extra beer (thank god for mail-order). If there’s any luck, maybe ASG’ll make Vancouver a regular tour stop – their brand of chicken-fried swamp-stomp is welcome here any time.

What can I say about Oakland’s High On Fire? Either you get it already, or you’re the sort of pencil-neck that has some kind of a problem with epic, Conan-the-Cimmerian battle metal come down with a wicked case of Lemmy-throat. GawDAMN son! THIS is burly-henchmen music! The kind of berserker thud-thunder that is best accompanied by things like Gojira stomping Tokyo; a wolfpack of outlaw bikers terrorizing some small town; Oskorei.

Matt Pike wields that custom nine-string like it’s the only thing standing between him and a marauding horde of slavering Orcs, and, metaphorically speaking, I suppose it IS. No surprise there, though – he’s been doing Iommi-riff-worship well better than most since his “Dragonaut” days back in every hesher’s favorite stoner band, Sleep.

Rearing back and lurching forward for that kind of beatdown that Oaktown’s prone to delivah, HoF was a skull-hammer right out the gate with perennial favorite “Rumors of War”. Us punters, right on cue, went appropriately nuts.

Pike and his cohorts Jeff Matz (bass) and Des Kensel (drums) short-burst sprayed us with a well-rounded set of old and new, following up “Rumors” with the venom of “How Dark We Pray” and “Turk” (heads-up: HoF’s new album, Snakes for the Divine, will be out by the end of February, and it predictably kills. Fuck, it’s SO good they should have just titled it Orgasmatron, Jr.). The title track of the new disc, midway through the set, is another howling fury that is sure to become a beer-sweat-yowled-for classic.

Though I’m guilty of doing it already (twice!), I do hate trotting out that overused MotÃ¶rhead simile – but let’s face facts: if there’s an heir-apparent to Allfather Lemmy’s legacy, Pike and his crew have doubtlessly been shortlisted for that gig. Their power-trio brand of ripping juggernaut chugga-chug would make Lem’s moles quiver with fatherly pride, and they proved it beyond a doubt Wednesday night.

Closing their set with another new one, “Bastard Samurai” (which sounds exactly like you’d expect a track called “Bastard Samurai” to sound!), High On Fire cemented (cement-head?) their reputation as The Metal Band To See. Big lug music by big lugs by for big lugs, god bless ’em.

(No Vancouver date’s been added so far to HOF’s upcoming headlining tour in April with Bison, Priestess, and Black Cobra, but fingers are crossed they’ll be back in full force.Â  If you missed this Volcom show, you owe it to yourself –and metal- to go and see them devastate.)