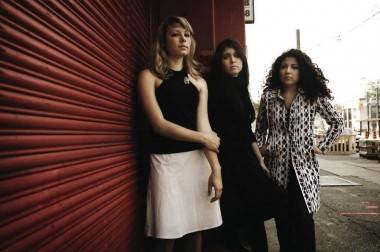 Now on its third record and a new label, Magneta Lane is reminding people why we made such a fuss over the Toronto trio in the first place.

The band formed six years ago, when sisters Lexi Valentine and Nadia King and their friend Francine “French” DiBacco decided to take their love of indie music one step further by making their own. The group’s first two records, The Constant Lover (2004) and Dancing With Daggers (2006), helped draw attention to the group’s melodic rock, spiked with lyrics full of social assessment delivered in Valentine’s sexy, blase monotone.

Three years after Magneta Lane‘s last release, the Toronto-by-way-of-North-York group is back with a new album, Gambling With God, a new label (Last Gang Records) and a headlining tour in the New Year. In the meantime, Valentine and King have recruited a stringer, Katerina Theodorelos (from Toronto band Lipstick Machine), to fill in for French while the bassist finishes her studies, for an impromptu tour with Sloan.

We reached Valentine on her cell, in the tour van on the way to a show in New Jersey from Columbus, Ohio. 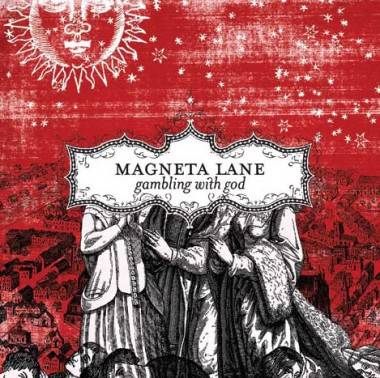 Shawn Conner: This was kind of a last minute tour, no?

Lexi Valentine: It was like totally last minute. But when Sloan says do you guys want to come on tour, how can you say no? Also, we toured with them before, and it was a really rad experience. They’re the nicest people in the world.

SC: And this’ll be your second show with Katerina Theodorelos?

LV: Yeah, she’s a really good friend of mine, we’ve known each other for four years now. We met in Toronto because both love music. She’s been in multiple bands in the city. It’s too bad that French couldn’t come, she’s definitely missed, but she had to finish university. She’s really loves the band and has always been 100% dedicated, it’s just something we had to do for her.

SC: Was it hard for her to say okay you guys, grab Kat and go, don’t miss out on this?

LV: Oh yeah, totally. We were talking about it right before we left. The cool thing is, French came to every single rehearsal before we left. She worked really hard with Kat to prepare her.

SC: So where was your head at when you were writing the lyrics to Gambling With God?

LV: Oh wow. All over the place? We had a lot of time to do the album. The recording process was probably on-and-off for a year-and-a-half. Everything before then had been rush rush rush rush.

So I think I was in this place where everything was self-reflection, where I was looking back on the last five years of my life, and really thinking at that point, what’s going to make me happy? A lot of the songs are about finding the balance between personal self-fulfillment and being in this band.

Because a lot of times when you’re doing well and your band’s doing well, your personal self can crash. You completely forget about everything else ‘cos you’re working working working working. That’s what I was thinking about – how do I make myself happy, and what do I want for yourself, what have I been through.

SC: So the usual 20something questioning oneself, with a little bit of angst thrown in there?

LV: I don’t want to say angst, it’s such a terrible word. I’d like to think we don’t whine. It’s just kind of, growing up. Really looking at what you’re doing and going, Wake the fuck up. You write songs to and about other people, telling them what they should fix in their situation, which is pretty much what I was doing for the first EP and the first LP. But at this point it’s like, take your own fucking advice. I might be a smartass sometimes and know what to say, but other times it’s hard to find that stability and balance in your own life.

SC: Is the band what makes you happiest right now?

LV: Uh… [laughs uneasily] That’s funny. I’d say it’s 50/50. It’s taken me a really long time, but I feel like my personal and musical life are in this amazingly stable place. Fingers crossed that it stays like this forever!

SC: What about the school of thought that says you have to be miserable to create worthwhile art?

LV: That’s so funny. I had a friend tell me, “Us musicians, we’re doomed, we have to be miserable to write good music.” I don’t necessarily think that’s true, you just have to write something that’s going to make people feel something. So whether you’re miserable or happy, you have to be able to inspire people.

SC: I remember you saying that one of the reasons you started the band was because you were tired of just being on the sidelines at shows. Now that you’ve achieved some success, do you feel some responsibility as role models yourselves for younger women who might want to start a band?

LV: I’ve met countless girls and… I really do love that, that our audiences are super diverse. But it’s really exciting when you meet someone a lot younger than you, like a 14 15 year old girl at the all-ages shows, and they say “I really want to start a band, and you guys are the reason I want to start a band,” or “I’d be honoured if you would listen to my CD.”

As a person, I don’t think we should ever be looked at as role models, the only thing I could say to people is maybe work hard, and if you really set your mind to something you can really achieve whatever the hell you want. I know that sounds super-cliche but it’s fucking true. Besides that, I don’t know, I don’t think we’re the best role models. If there’s anything maybe people can say is that we work really fucking hard.

SC: Is the band now where you’d hoped it would five years ago, when you started it?

LV: I think as you grow up your goals change a little bit too. Especially when you’re bright-eyed. We always tried not to be too naive when it came to the music business.

At first maybe we wanted to dominate the world, and now we’re thinking about what are we going to do when we’re 30, what are we going to do five years from now or 30. You start to think about those goals. What would make you ultimately happy? If world domination is not in the plan, I’m not going to be super-disappointed. But I’d like to be able to do music the rest of my life, to be able to buy a house and buy a car. And maybe grow up one day, and be a grown-up.