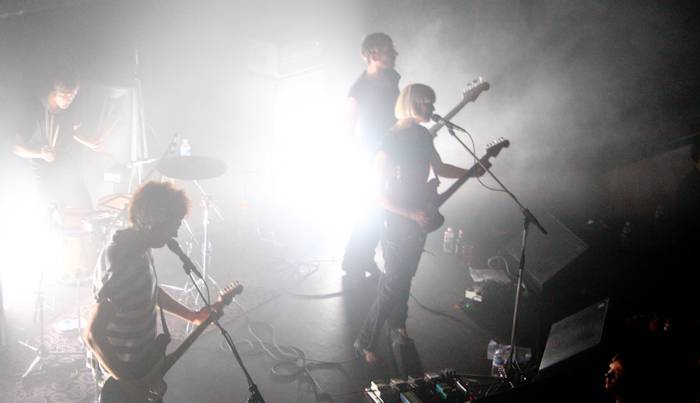 Review and photos – The Raveonettes in Vancouver, Nov 5 2009

November 5, 1955: Doc Brown is standing on a toilet hanging a clock before slipping and hitting his head on the sink. In this instant, he conceives of the Flux Capacitor, the device “that makes time travel possible.”

November 5, 2009: The Raveonettes take to the stage at the Venue in Vancouver. For 90 minutes I feel like it is 1978 and I’m at CBGB’s, NYC, and this is what it must have felt like to see Blondie for the first time. And not just because of Sharin Foo’s flaxen hair or the parallel lines on Sune Rose Wagner’s t-shirt.

I will tell you how good this band is: halfway through the opener “Gone Forever”, off the Raveonettes‘ latest release In and Out of Control, the sonic power of this Danish duo hit my head as hard as Doc’s hit the sink. Although I didn’t conceive of a device to successfully penetrate the time-space continuum, my mind did travel back in time, recalling an old interview with Talking Heads bassist Tina Weymouth in which she talked about how really good rock and roll “ought to make you move your hips and want to…”, well,  fuck. And for the next 90 minutes, that’s exactly how I feel: I just wanna fuck.

(From the barely legible scrawl in my journal, “They sound so fucking good it’s incredible and it’s only been 5 minutes and I never want to leave.”)

The Raveonettes are truly Masters of Musical Theater. Onstage, musical partners Foo and Wagner are a static presence; they are busy holding court making music, and the audience is there to hear them more than they are to watch them play. Graduates of the same school of lushly distorted progressive headphone art-rock as Radiohead (the Raveonettes get higher marks in the “sexy” category), they double majored in the Jesus and Mary Chain,the Velvet Underground, and Phil Spector wall-of-sound harmonies while simultaneously minoring in ’50s- and ’60s-era surf-twang chord progressions. 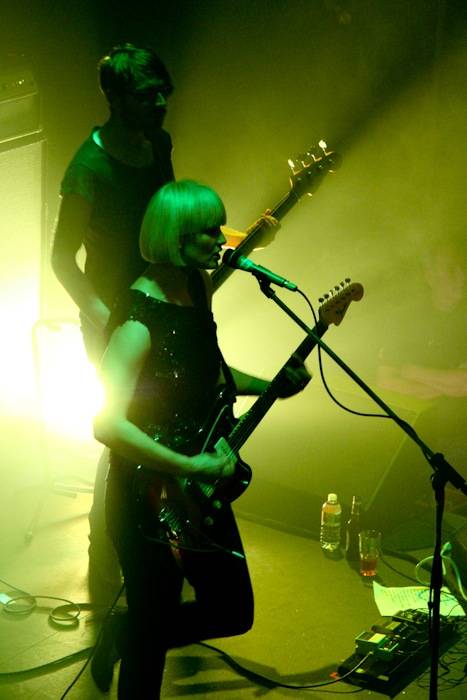 The overall resulting sound can vary from a Dick Dale wail (as heard through the rear of a screaming fuselage as it plummets to Earth), to the most ice-creamy smooth-on-a-hot-summer-day bassline (played by those Danish emo kids that stay up late covering the eerier selections of Angelo Badalamenti on electric guitar in their parents’ smoke-filled basement).

Foo is often bandied about in music magazines for being one of the “Sexiest Women in Rock.” That’s pretty accurate. Personally, as a 30-something, Chuck Taylor-wearing female who is alternately dismayed, disheartened, or disgusted by the current mainstream embrace of the stripper aesthetic (or as I like to call it, “Vulva Chic”), I find such quantitative comparisons patronizing, trite and boring.

As such I feel confident in extending an objectively authoritative assurance that Foo is, most definitely, the Sexiest Woman in Rock. This is not so much to do with her look (although being drop-dead gorgeous and effortlessly cool in black skinny jeans and a loosely fitted, sequined, asymmetrical top months after giving birth to her fist child doesn’t hurt), but rather because Foo can command the stage. It is so fucking cool to see a woman take charge with her talent and not her tits. Great Scott!

And then she bent over, disappearing into her guitar to make that awesome back-of-the-airplane distortion sound. This is heavy. She played the drums – in heels. Is there anything this warrior woman can’t do?

Ironic, then, that the climactic high point of the night was reached during the two songs that the Raveonettes performed stripped and bare. Foo’s vocal perfection in the desperately glorious, gutsy, girly “Breaking Into Cars” played as a call to be answered by Wagner’s equally moving solo rendition of “Little Animal” that, no joke, moved me to tears.

In that moment, Wagner took my breath away. It was a most precious, unexpectedly sweet gift that will replay in my mind (and YouTube) for quite some time. Left breathless and heaving, the band took no pity on the stunned crowd and instantly revved back up and switched gears, hitting 88 mph in as much time as it takes a lightning bolt to hit the clock tower and generate 1.21 gigawatts of electric guitar power.

Unfortunately, the Raveonettes show did come to an end and that fantastic evening remains suspended as a memory that, in reality, none of us in attendance can ever go back to. Fortunately, shameless flirtation with the A/V guy ensured successful retrieval of the setlist, so feel free to allow your inner-geek to partake of this little bit of information and re-set your Delorean (now with iTunes!) back to November 5 as often as you like.

2 responses to “The Raveonettes at Venue”