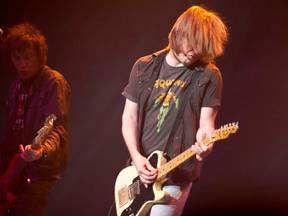 We were moving, passing every car on the highway. The rain was thick on the windshield, like some gremlin was standing on the hood spraying it with a hose. I leaned closer to the glass and it looked like the little bugger was leaning on the hood ornament, with a gnarled green thumb over the nozzle. I thought I could make out the lit end of a stogie clenched in his teeth, but it was the brake lights in front of us. My driver yelled and my face bounced of the glass as we hit the brakes hard, my Caesar spilling all over the crotch of my pants. Somewhere in the dark, the devil gremlin laughed.

“Damn your eyes, man, watch the road,” I yelled. He said nothing but pulled a hard right and we bounced over a curb and into the parking lot of the Boulevard Casino. I burst from the cab of the truck, fists balled up, ready for anything. My driver jerked his head around wildly looking to see what I was defending myself against, but nothing emerged from the black.

“Let’s hit the tables, I feel lucky,” I barked. “Do you have your paycheque?”

“Yeah, Carl, but we’re late and you don’t look so lucky standing there in the rain red-eyed with a clamato crotch.”

I could only hiss and curse under my breath. My driver also neglected to mention we were here to review a gig, we had no tickets, we weren’t sure if we on the press list, and on top of that we were in Coquitlam. Coquitlam! Fuck! What did Alec Guinness say about Mos Eisley? We booked through the lot to the box office. I knew I had to pull it together for talking to the face in the booth, but my brain was reeling from the effects of all day drinking session and the fungi we had ingested to counter the effects of all the tequila was now running full speed through my cerebellum.

The Face was not happy we had no ID, so I played the indignant card and tossed out a few VIP waterhead names I was dimly aware of. It worked and we were in. The place oozed class – low and none. But the beer was cold and the seats were good, even if there were a handful of mooks around us who looked like refugees from a lakeside bar in Kelowna circa ‘86.

My driver yelled, “What the fuck is wrong with these people?” and a few blue hairs moved to some empty seats, of which there were many. Red Robinson and some and soft rock dj from Merritt introduced the band by saying, “Who remembers ‘Runaway Train’?” I shuddered and let out a long, loud moan. The driver was visibly agitated.

Soul Asylum hit the stage just in time. Dave Pirner and Dave Murphy – they were both wearing the same clothes since the last time I saw them in ’95 or so when they played the Commodore with Uncle Tupelo. This time they had Tommy Stinson with them. Stinson banged on his P-Bass like the North American Paul Simenon that he is, in step with a 400-lb black man [Michael Bland, former Prince drummer-Ed.] on the drums. They played a few new songs and looked uncomfortable and stiff, and then they played “Runaway Train” and half the crowd left. Which seemed to cheer the band up, and then they started to tear through the back catalogue. 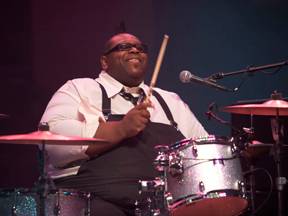 I went up front and Soul Asylum blew through “Cartoon”, “Easy Street”, and “Spinnin’”, and I was transported to a time when this band ruled my world. Their town had a lot in common with mine and I picked up the signal from across the prairie. How many towns or times could produce that much good music that fast? The ‘Mats, Husker Du, the Jayhawks, and Soul Asylum. Name me one town in the last ten years that has put out so many classic albums? And now Soul Asylum is in this exceptionally un-rock ‘n’ roll venue, and playin’ to no one. It’s a long way from the Presidential Inauguration [in 1993 the band played the first inauguration of Bill Clinton-Ed.] and dating Winona Ryder to a Coquitlam casino. 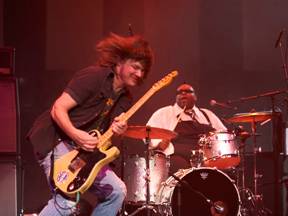 During the encore, Murphy remarked about playing Vancouver with the Stretch Marks and the band’s then-drummer catching scabies from some girl’s bed at punk-rock crash pad. After a long, loud, drunken, sweaty gig we passed Tommy Stinson at the roulette table picking up a couple of Asian hookers, and I thought, “Looks like another member of the rhythm section will be catching something in Vancouver. Well, Coquitlam.”

19 responses to “Soul Asylum at the Red Robinson Show Theatre”