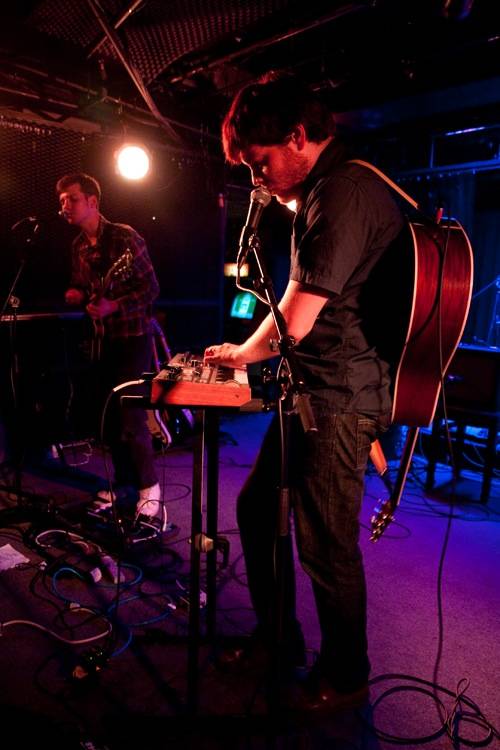 Two Hours Traffic‘s latest album, Territory, has been billed by some as the group’s “dark” record, a label that even the band members themselves acknowledge is a misnomer. Still, when it comes to a sunny pop rock act like Two Hours Traffic, darkness is a relative term. Certainly, there was nothing remotely creepy or disturbing about the Charlottetown quartet’s performance on Thursday night at the Biltmore.

It may have been pouring rain outside, but the atmosphere inside the Biltmore was pure summer, as the band opened with a trio of its catchiest, most upbeat songs: “Territory”, “Nighthawks” and “New Love”. The latter, a cut from 2006’s Isolator EP, is as ebullient as anything the band has ever written, and its choppy guitars and ebullient synth riffs earned one of the biggest cheers of the night – especially impressive considering most of the audience didn’t seem to know what the song was. (For the love of God, someone please convince the band to put this tune on an LP.) 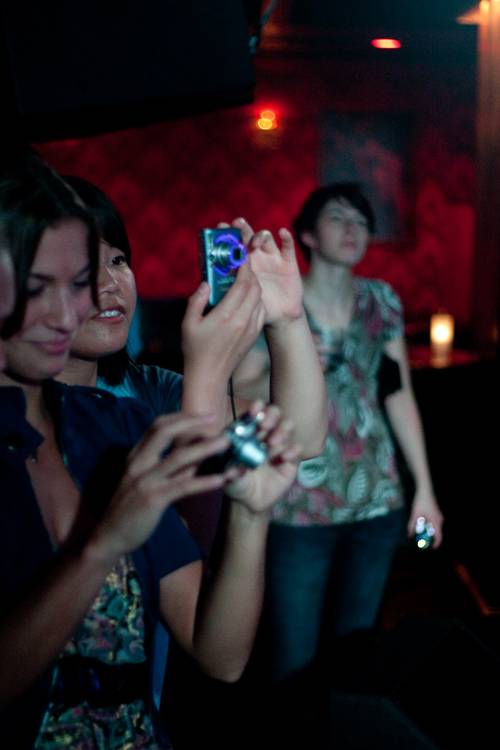 Aside from the odd cursory comment from lead singer Liam Corcoran about the new album and the occasional thank you, Two Hours Traffic didn’t interact with the audience much. Bassist Andrew MacDonald wore a retro Canucks shirt (the orange/yellow skate logo), but that’s as much as any of the musicians bothered to pander to the audience. Mostly, they just raced from one pop gem to the next, making sure to hit all of the highlights from their past two albums. The rollicking, quasi-country gallop of “Sure Can Start” was a standout, its bubblegum groove giving way to a crashing, dramatic breakdown.

The good vibes subsided slightly mid-set with a back-to-backing pair of the band’s two worst songs, the over-earnest “Just Listen” and the syrupy “Stolen Earrings”. Thankfully, the group rescued the performance by following up these two duds with the best song of the night, the blistering, Strokes-indebted single “Stuck for the Summer”.

Nearing the end, the band toned it down with “I Did What I Could”, an extended version of the 30-second snippet that appears on Territory. An adaptation of an old folk song by Oscar Brand, its touching lyrics and delicate arrangement were enough to make listeners wish the full version had been included on the album.

This was followed by the searing fuzz-rocker “Happiness Burns”, its biting guitar chords paired with sweetly jangling leads and gorgeous, sunburnt harmonies. It wasn’t exactly dark – especially not with lyrics about “daffodils in your eyes” – but it did provide a touch of grit otherwise missing from the cheery performance.

If Two Hours Traffic was lacking in weirdness, the same cannot be said about opener Spiral Beach. The band members walked on stage looking like extras from a Siouxsie and the Banshees video, with singer Maddy Wilde dressed like a rag doll and sporting a massive pink bow in her even huger hair. Guitarist Airick Woodhead, meanwhile, resembled a bleach blonde Nick Zinner, while bassist Dorian Wolf had a pompadour and mutton chops. 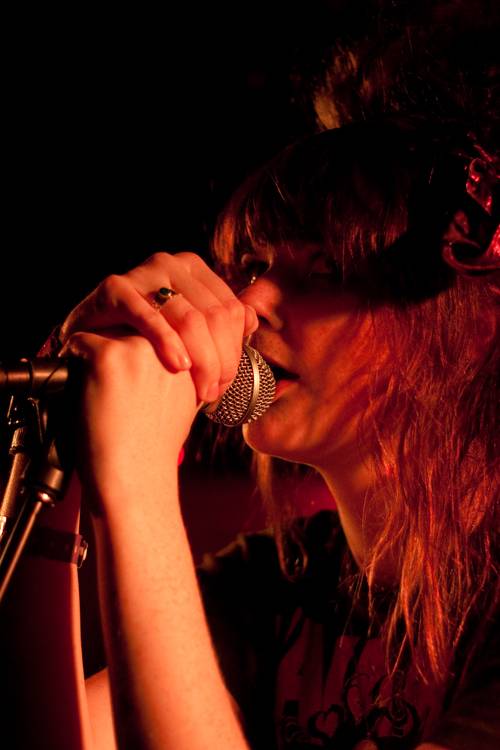 Tearing through a series of cuts from the newly released The Only Really Thing (sic), the Toronto band mixed punkish new wave with Eastern-inflected melodies and bizarre forays into carnival music. Blood red stage lights set the tone for “May Go Round (in a Mania)”, a psychotic goth rocker with distant, echoed vocals. The set closed with “Cemetery”, which resembled a spiky, guitar-heavy version of Blondie‘s “Call Me”. As Wilde walked over to Woodhead and calmly placed a traffic cone on his head, it was clear that no one would be forgetting the name Spiral Beach anytime soon. 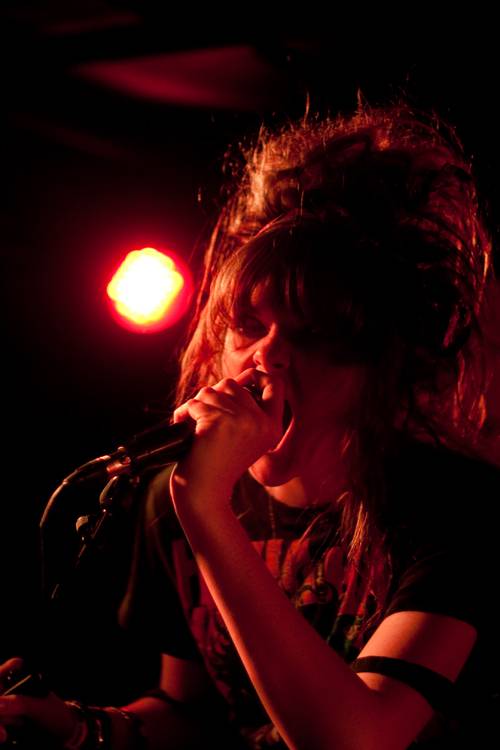 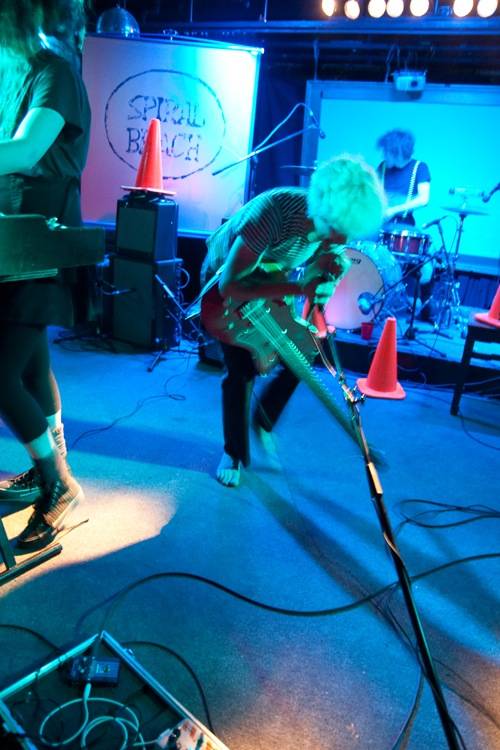 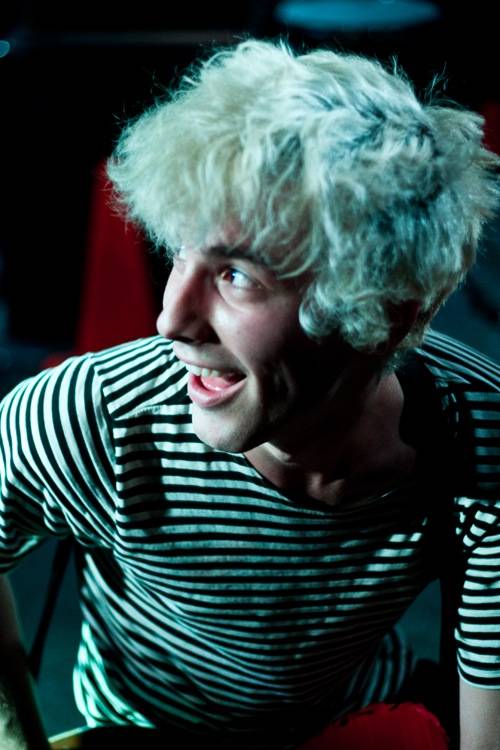