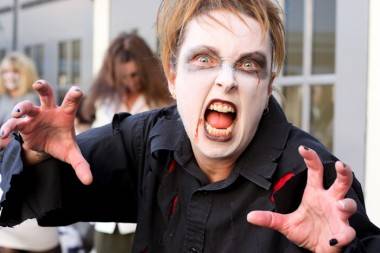 – text and photos by Jessica Bardosh

Saturday saw hordes of zombies descend upon the Roundhouse Community Centre to pay homage to the late Michael Jackson, wrassle up some much needed donations for the Vancouver food bank, and to try to set a world record for simultaneous dancing to the iconic “Thriller”.

Known as Thrill the World, the idea was conceived as a way to unite the world – 300 cities took part – through dance while raising money for local charities and having an enormous amount of fun. With the untimely passing of the pop phenomenon himself, the event has taken on a touch more meaning, with many of the zombie dancers adorning the words “R.I.P” and “You won’t be forgotten” on their tattered garments.

After a brief countdown to synchronize Vancouver’s undead with the rest of the world’s, one of the most recognizable melodies of all time brought rise to an extremely coordinated group of haunted souls. Staggering their way through a performance that would have made MJ proud, the 200 or so zombies made sure that all of us who surrounded the Roundhouse had a fantastically frightening good time. It’s not often you see an Elvis zombie roaming around one of the more affluent neighborhoods in our fine city!

2 responses to “Thrill the World”