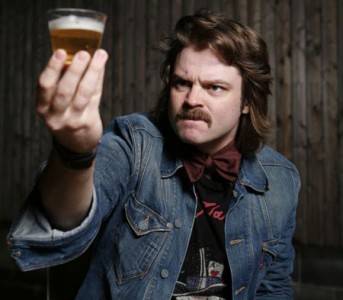 Glenn Wool began his comedy career in Vancouver in 1995.

From a press release: “He moved to London in 1998 and quickly became an established star of the London comedy circuit where he continues to perform to sold out houses.Â  In his stand up, everyone from Franz Ferdinand to the Pope are fair game. Glenn has appeared in 28 Acts in 28 Minutes for BBC Radio 4, contributed to BBC3’s The Comic side of Seven Days, BBC Stand Up Show, Live Floor Show, The World Stands Up and Comedy Blue for Paramount and starred in “What’s The Story?”, broadcast on Channel 4 as part of the Comedy Lab.Â  This year Glenn will also release a new comedy album, Let Your Hands Go, for Stand Up! Records.”

We reached Glenn Wool by phone in Fernie BC, where Wool was nursing a mid-afternoon hangover after a day on the slopes, a night on stage and later night of drinking, on The Snowed In Comedy Tour. The tour, which also features comedians Ed Byrne, Dan Quinn, Craig Campbell, has been stopping at bars and clubs close to ski hills, mostly in B.C. The tour comes to the Edgewater Casino in Vancouver Feb. 6.

Shawn Conner: I didn’t know you were a skiier.

Glenn Wool: Oh yeah. Some of the guys on the tour are going through a mid-life crisis and they snowboard. I’m too old to learn new tricks.

SC: Are you a good skiier?

GW: Fair to middling. I tried the high-performance rentals yesterday. I’m good enough that they make a difference.

SC: You grew up in Vancouver?

GW: I grew up all over Canada, but I lived in Langley and went to high school in White Rock.

SC: And you live in London?

GW: I lived in London the last 10 years, but I’ve now moved to Los Angeles for work purposes. It’s a bit daunting. I’m going down the day after the gig in Vancouver. The last year I’ve just been touring extensively. Australia, New Zealand, UK, Canada America.

SC: Being a Canadian who’s lived in London, that should give you some novelty value when you go down to L.A.

GW: Yeah, I would think… it’s funny. Sometimes people don’t understand it. They don’t have that scope in their imagination. They’re like, “Why?”

SC: What was it like being a Canadian comic in London?

GW: It was great. London’s got a great stand-up circuit, the best in the world. The opportunity to move to L.A. came up, I got divorced, I can always go back to England, let’s give America a shot.

SC: Maybe you’re having your own mid-life crisis.

GW: Yeah man. From the size of my hangover I think my mid-life was about 10 years ago.

SC: One thing that struck me from the videos up on your Myspace page is that one of your obsessions is terrorism.

GW: I haven’t really been doing the terrorism stuff lately. The bigger concern to me now is the bankers. That’s what happens when you kind of stop doing stuff and you don’t mind posting the clip of you doing it. Although I did consider bringing it back inÂ  when that gentleman on the flight… but it’s just so ludicrous.

It’s hard to make a joke about him. We’ve all been in line to get on a plane and have our shoes checked and looked up and down and here’s a gentleman whose whose father actually called the authorities and said I don’t think he’s got good ideas, and flying on a one-way ticket, and obviously a terrorist. That was too slick for the authorities. They couldn’t get their brains around that one.

SC: I guess airport security is something you just take for granted.

GW: I’d rather fly on a plane that had really extensive security than one that didn’t. It’s like when you see comics doing jokes about cops pulling them over – well, stop speeding.

SC: The other comics on this tour, did you know them before?

GW: We’re all good friends. We put it together ourselves. This was actually was Danny’s idea and then he told me about it. He was just going to do gigs at bars beside ski hills and I said I’m going to be around, I’ll come and open for you just fort the laugh.

Then I told Craig about it in Edinburgh and he liked the sound of it, then he told Ed and Ed said he wanted to do it. So I called Danny up and said we’ve got two pretty big comics that want to do it and he said I think we should start looking at theatres. That’s how it started. We’re in the second year now. This year we’ve even sold-out house.

SC: It sounds like it would be ripe for a documentary.

GW: That’s what we’re hoping for, we do have a cameraman. He takes the camera out on the hills and tapes all the shows.

SC: So when you go down to L.A., are you going to be chasing a sitcom role?

GW: I wouldn’t say no to it. I’m reading for parts in them. February is pilot season. That’s when they cast all the sitcoms. I wouldn’t be adverse to it. If I just wanted to do stand-up the rest of my life I’d just stay in Europe because the scene’s a lot better. Not to disparage the American clubs, those are also very fun. There are just more gigs and you get paid more. If it was all about stand-up I’d just stay there. I want to stretch my muscles a bit.

SC: Plus it sounds like the stand-up life can take a bit of a toll…

GW: You better believe it.