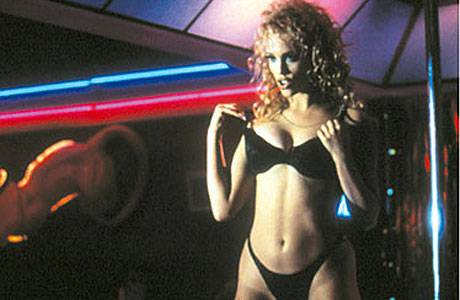 Scurrilous Ephemera Oct. 6 2009 – Showgirls back in the news. And so, apparently, is cocaine

So abcnews.com is reporting that celebrities sometimes suffer from OCD, including Charlize Theron, David Beckham, Jennifer Love Hewitt and Leonardo DiCaprio. In fact, many not-hot people also suffer from Obsessive Compulsive Disorder, but how banal is that? Who wants to think about Mrs. Jones down the street checking her locks a hundred times a day when we can picture Charlize sneaking out of bed because she “saw something in that cabinet that just shouldn’t have been there,” or Becks, shirtless in the glow of the fridge light, rearranging the sodas. Yes, he has to be shirtless, certainly that’s part of his condition–when was the last time you saw a picture of that man with his shirt on, or trousers, for that matter? Yes, OCD sucks, except for all the cleanliness, (says the slobby blogger who recently lost a small dog in a massive pile of laundry).

Medical breakthrough: a vaccination against the effects of cocaine has been created. Though it appears to be effective only about 38 per cent of the time, this result is enough to encourage researchers. The vaccine blocks the euphoric effects of the drug for up to two months, during which time psychosocial treatments can possibly bolster an addict’s recovery chances. Good news: this means there could soon be 38 per cent fewer annoying people at parties, and a 19 per cent reduction in bathroom line-ups at the bar (cokies like to share a stall), but leaves a very disturbing question. Does this mean that 62 per cent of people do coke simply because they enjoy bleeding noses, bad breath, frozen teeth, and donating money to murderous gangs in South America?

A final confirmation that Hollywood has truly run out of ideas: Showgirls II! A German website reports that Marc Vorlander has secured over $25m to begin filming. The plot: something about a cocaine overdose (strippers need that vaccine!) and a brother going to Frankfurt with a vendetta. At least it couldn’t be worse than Transformers 3, unless of course the “almost viciously untalented” (thanks New Yorker!) Michael Bay directs it and it stars Megan Fox (apologies to the editor, who has a thing for Ms. Fox). [Not true!-ed.]

One response to “Is this the time for Showgirls II?”