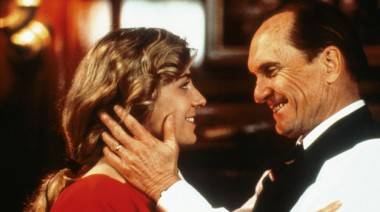 I’ve never been one to really go for the typical zombie-blood-gore horror flick. Sure, they may scare me in the moment, but seeing as how I have been dealing with my own personal 28 Days Later blood-and-gorefest every 28 days for most of my life, I’m not all that moved by them.

On the other hand, I do appreciate the Lady Horror film – movies that speak to my own estro-driven-psychosis. As much as I hate feeling scared, I also relish how a movie can make your brain go a big psycho (or, in my case, more so) for a couple of days.

Carrie (1976) – We all have to deal with bitches, and poor Carrie (a somewhat fetal Sissy Spacek) had to deal with them everywhere. Her home life is a disaster zone (mom’s a religious, prudish psycho and really a very poor role model) and, to make matters worse, Carrie’s got no friends and has to contend with High School Bitches. Hands down, the most evil bitches you’ll ever meet are the ones who makes fun of you in gym class, trick you into thinking the hottest sweathog really is “that into you”, and punk you (at the prom!) by pouring blood all over your pretty dress in front of, like, everyone. Is it any wonder Carrie unleashes her shitstorm? (It’s just too bad Betty Buckley had to bite it the way she did – Carrie may have gone a little too far in her fury, but really, gym teachers are the perpetrators of their own unique brand of high school girlish misery. Yes, there’s a story there and yes, I’ll share it another time.)

The Handmaid’s Tale (1990) – Margaret Atwood’s frightening, dystopian tale about an America (undoubtedly a Republic administration) that herds, brainwashes, and enslaves its dwindling population of fertile women as baby breeders gets the movie treatment. These “handmaids” live in a world without basic necessities like hand lotion, are forced to wear unflattering habit-like costumes and engage in bizarre, pleasureless sex rituals (an awkward three-way with Natasha Richardson, Faye Dunnaway and Robert Duvall – shudder – has permanently scarred my brain). America at its most radical right is always scary, but this film’s futuristic vision is particularly horrifying because it seems somehow… plausible. It’s 1984 as seen through fallopian tubes.

The Fly (1986) – You finally meet a man (a doctor!) who has everything you’ve been looking for: he’s a nice, Jewish, nerdy-scientist type; an attentive, romantic sweet geek with a bitchin’ hot bod (killer six-pack!) who is a total wizard in bed. Together, you’re this really cute, super tall couple. Like, swoon, right? Wrong. Too bad when you finally hear the words you’ve been waiting all these years for, “It’ll be you, me, and the baby!” it’s from a dreamboat who neglected to tell you about how he accidentally cross-infected his DNA with a housefly. If his penchants for sugary coffee, insatiable need for chocolate bars and uncanny arm-wrestling skills don’t tip you off, the weirdly coarse body hairs and eventual fingernail explosions will. Oh, yeah, and then he develops this nasty habit of having to vomit on his dinner before he eats it (totally not cool). So now, of course, you’re pregnant with his fly-baby and are running out of options… of course it will end badly but you’re strong and will do what’s required, because you’re a romantic, you can’t just stop loving the guy. This film is every single woman’s worst nightmare. 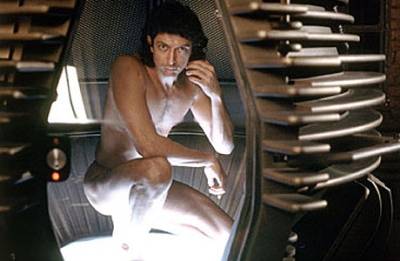 Jeff Goldblum in The Fly.