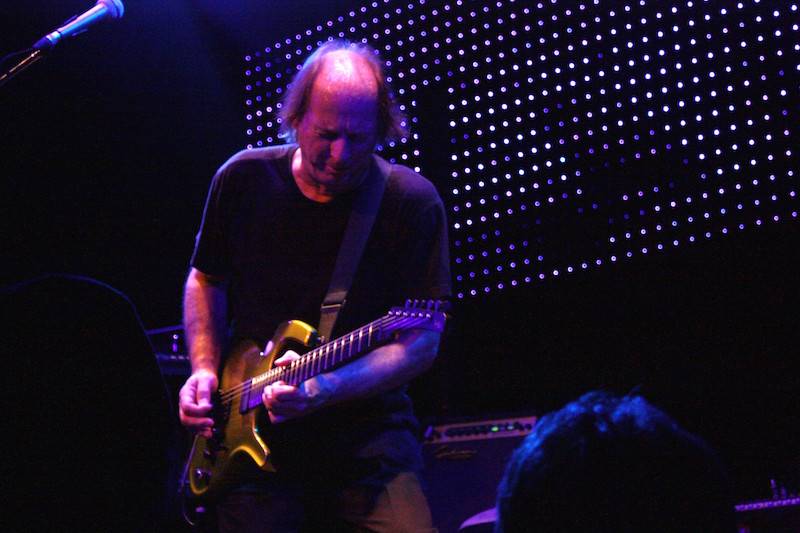 The story, as told to some fans by Adrian Belew after his amazing show at Vancouver’s the Venue, goes like this: after playing the Royal Albert Hall, Belew was approached by Jeff Beck. The renowned guitarist made a sawing motion, as if he were cutting off his own arm. The irony is Beck is Belew’s favourite guitarist, and here his hero was basically saying, “I won’t be needing this arm anymore, mate. No point me playing after I’ve seen what you can do.”

Discovered by Frank Zappa in 1977, Belew has since played with Talking Heads, Nine Inch Nails, Laurie Anderson, and someone called David Bowie. Most know Belew through his work with King Crimson, and his solo career, which began with the Lone Rhino album in 1982.

What’s he up to in 2009? Still playing, composing, and recording, and still making guitarists feel at turns inspired and hopeless–not chopping their arms off, maybe, but certainly realizing they could never do what Belew does. Many at the half-full Venue nightclub watched him ultra-intently, with a “How does he do that?” combination of curiosity and admiration. A few (like yours truly) tried dancing, but you’d have a more stable surface on a moving funhouse floor, such were the shifts and stops of his angular melodies and rhythms.

This past June, Belew released both A Cup of Coffee and a Slice of Time, an album of guitar-and-piano improvisations of Belew songs with pianist and Michael Clay, and e, with his current band, the Adrian Belew Power Trio. He began his Vancouver show with the first two songs from e and closed it with the title track. In between, he gave an object lesson in technical ability combined with a truly unique avant-garde sensibility.

His band, twenty-three-year-old Eric Slick on drums and his twenty-two-year-old sister Julie Slick, were beyond the beyond. I’m a drummer myself, and the gifted Slick is right up there with the best drummers I’ve seen–a list that includes Steve Gadd, Vinnie Calaiuta, Art Blakey, Roy Haynes, and even Buddy Rich. Slick is not only in their league, he could be the league’s commissioner–especially considering his age and the challenges of Belew’s music.

And what of that music? A professor once told me, “Music is the search for a new sound.” By that definition, Adrian Belew is music.  Words like “unique” and “original” seem almost inadequate. And a “new sound”? Belew’s music still sounds not only new, but ahead of its time. It exists in its own universe, and ’twas a beautiful thing to go to Planet Belew, and see things from a wholly different view.

One response to “Adrian Belew at Venue”