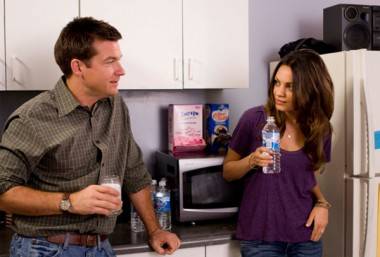 Office Space is a hard movie to top. The 1999 sleeper found a long afterlife on DVD. A slew of quotable lines and a memorable cast of workplace archetypes cemented its cult status and convinced critics that Mike Judge was a director to watch.

Idiocracy, Judge’s second turn in the director’s chair, left this critic thirsty for more than Gatorade – which, in the movie, replaces water as mankind’s most vital beverage – but Idiocracy, too, gained a second life once it hit the Blockbuster shelves.

With Extract, Judge returns to the workplace once again to tell the story of Joel (Jason Bateman playing his Michael Bluth/Arrested Development straight man), the workaholic owner of an expanding food extract production company whose wife Suzie (SNL’s Kristen Wiig in a quelled, droll performance)ties close the sweatpant drawstrings every night at 8:00 p.m. 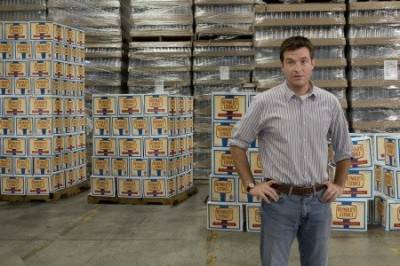 Joel hasn’t been laid in months and he’s tempted by the new factory temp (played by the sultry – okay in this role, slutty – Mila Kunis, last seen helping Jason Segal forget Sarah Marshall), but his bartender buddy Dean (a long-haired, bearded Ben Affleck) has just the remedy. Under the influence of a horse tranquilizer, Joel hires a gigolo to pose as the new pool boy and seduce his wife. If she submits, Joel can pursue the sexy temp sans guilt. What transpires is a confusing mess. There’s too much going on and not enough of a pay-off in the laugh department to warrant so many story strands. A couple of sight gags that had me laugh-crying, but the lag time between guffaws was too long.

For a movie set in a dream-crushing, white-collar workplace, Office Space had a lot of soul. Extract, with all its  bizarre, tangled plot twists and Judd Apatow outrageousness, ends up feeling a bit hollow. But who knows, maybe I just need to rent it a few dozen times before I get the joke.