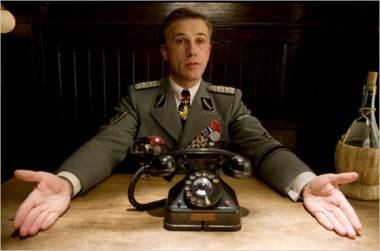 Considering Uma Thurman‘s Lulu-esque bob in Pulp Fiction, Inglourious Basterds is in a way full circle for Quentin Tarantino. The writer/director is up to his old tricks, paying homage to a filmmaker (G.W. Pabst, who directed Louise Brooks as the character Lulu in the 1929 classic Pandora’s Box) while re-inventing a genre.

Or not. Maybe that’s too much film history to bring to bear on Inglourious Basterds, which is as much about Nazis as Raiders of the Lost Ark is. That’s not a criticism, mind you. But the WWII action flick is a fantasia, almost a cartoon at times. And it’s really about movies; at every turn, Inglourious Basterds is a reminder that Tarantino, perhaps more than any other director, has learned just about everything he knows from movies. And he’s always going to be one step ahead of you, sucker.

Not just the many Pabst references but the film’s plot itself is an homage to movies and filmmaking – the crucial scene is set in a movie theatre, and Joseph Goebbels‘ WWII film program is a subplot. And the way Tarantino milks every last scenery-chewing ounce from Christoph Waltz (who, from the moment he appears as “the Jew hunter” Hans Landa, makes you aware of why Tarantino has said he couldn’t have made the movie without him), Brad Pitt and Melanie Laurent (not the love interest, but a survivor with her own plan – there are no love interests in Inglourious Basterds, unless it’s Tarantino’s affair with film) is another way in which the movie is, glouriously, a movie.

If I have a problem with Inglourious Basterds – which is one of the few films in the last decade that actually earns its lengthy (two-and-a-half hours) running time, and entertains every step of the way – is that Tarantino the winking, self-conscious hipster/stylist sometimes gets in the way of Tarantino the master craftsman. That is, some of the tricks, like superimposing titles on characters, or breezey voiceovers always letting you know he’s in on the joke, are at odds with the best bits, which are usually lengthy set-pieces in which characters just talk, and all the important info is conveyed beneath facades of civilized restraint, and the audience is fully engaged in the outcome of the scene. There’s one in particular I’m thinking of, set in a bar where the Jewish fighters aren’t expecting to run into any German officers (but of course do), that must last at least 20 minutes, all dialogue and character interaction that feels like a play. When Tarantino is this good, and he is for most of Inglourious Basterds, it’s easy to overlook his indulgences.