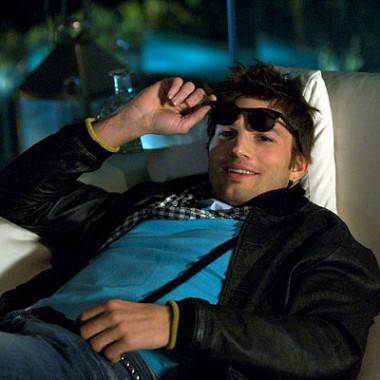 Those three people aside, don’t feel too bad if you haven’t heard much about this new movie. Spread, which seems to fancy itself an updated version of American Gigolo in hipster suspenders, is not the kind of movie you’ll discuss over Americanos with your film snob friends. It probably wouldn’t even come up in a friendly chat about films you’ve seen recently with other, less discerning friends. It’s not that Spread is merely forgettable – really, I almost wish that it were. It’s that it’s so excruciatingly painful to sit through that if I didn’t feel obligated to see the entire film before writing this review, I would’ve left within the first 30 minutes.

Kutcher stars as Nikki, a morally-challenged grifter who scams his way into the hearts and Hollywood Hills homes of well-to-do women. Nikki explains his modus operandi to the audience by way of a self-aggrandizing voiceover, related in a grating monotone. The plan is simple: dressed in the designer duds purchased by previous lovers, Nikki approaches single women who, though still beautiful, have crossed over to the dark side of 40. Bewitched by this young stud and his carefully plotted 26-point plan (as an example, cooking dinner for the woman earns somewhere in the neighbourhood of six points), somehow the women turn their houses and black AmExs over to Nikki. Once this trust has been earned, Nikki just has to wait for the women to go out of town, so he can throw parties in his benefactors’ homes and fuck women in their 20s on the sly.

Yeah, I know. It’s hardly rocket science. But there’s a twist! Nikki falls for a waitress at a local cafÃ© (“Dude, I think I like like her” is actually a sample line of dialogue), only to find that she’s running the exact same game. Can these two vacuous grifters learn to follow their hearts and put their whoring ways aside? Maybe the real question is, do you even care?

If you’re like half of the audience at the preview screening, you don’t. As Kutcher plays him, Nikki is a self-absorbed and entirely unsympathetic person – as multiple other characters point out, he is both boring and shallow. After we’ve spent most of the film with a guy this unlike able, how are we supposed to buy or even care about his eventual transformation? Everything about Nikki screams affected: his walk, his talk, his stupid scarves, and especially those goddamn suspenders. When Anne Heche, as one of his lover-cum-sponsors, declares in the face of Nikki’s infidelity that she still loves him, the guy a few seats over muttered an audible, “Why?!”

All right, I’ve been harsh, so here are a few nice things about Spread: Anne Heche’s body, Anne Heche’s infinity pool, uhm… I’m sure I’ll think of more later. Probably not, though. In a few hours, I’m hoping to have forgotten that I ever had to see this movie. If anyone ever tries to tell you that Spread is an intelligent indie commentary about the lost souls in LA or some other claptrap, do me a favour and tell them to shut up already.