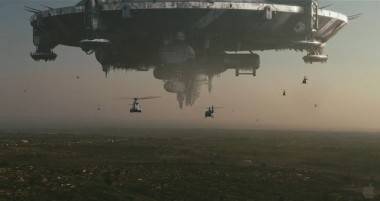 The story* goes like this: District 9’s director, Neill Blomkamp, was set to direct the film adaptation of Halo. Halo’s producer, Peter Jackson, had faith in the fledgling director, whose resume thus far was a string of commercials and shorts based on the Halo universe. But when it came time to get to work, the studio ran out of money (and, some say, faith in the untested young director).

And then Blomkamp, a Vancouverite who’d spent his childhood in apartheid-torn South Africa, gave Jackson the script for District 9: A grandiose, Johannesburg-set, film expanding on his own short, Alive in Joburg, about aliens coming to earth and being forced into slums by a frightened populace. Jackson said yes, signed on to produce, and set about creating the aliens in his New Zealand Weta workshop (Jackson’s Industrial Light & Magic; the birthplace of many a Lord of the Ring orc and Gollum).

The result could have been catastrophic: an unknown director helming a huge genre film – with a long and storied blockbuster tradition – that doesn’t have a bankable star nor a Washington, DC or NYC backdrop. Nor do the aliens come ready to war. Nor are there muscle-bound heroes.

Instead, at its heart, District 9 is a grand apartheid allusion – and for those of us only semi-familiar with South Africa’s murky past, the feeling of disconnect from the subject matter and lack of a sense of place (I had never seen the Johannesburg skyline before, never mind spent two hours keening my ear towards that accent) only further works to help hit the points home: Why does the human race shrink from or rail at difference? What does it mean to be “alien?” Are we not alike, deep down? Is cruelty easier to perpetrate (and stomach) if the victim does not look like us, speak like us or live like we do?

“District 9” is the government’s designate for the slums in which the aliens have been forced to live, and forage for food and shelter. Twenty years prior, a mysterious ship landed in the airspace above the city, and when it sat for days without contact, officials decided to cut it open and force contact themselves.

The aliens are not welcomed, but they aren’t allowed to leave either (for reasons of power and violence that are, at their core, frighteningly simple). This is further complicated when the affable, ineffectual Wikus Van De Merwe (Sharlto Copley), an employee of the corporation employed to keep the aliens in line, is sent in on a special mission to evict the District 9 aliens and relocate them to a newer camp – District 10 – away from the increasingly riotous Johannesburgians. While on the mission, he picks up a strange device, and an alien substance within it sprays him.

Of course, the shit hits the fan. Big, gross, awesome, alien stuff happens, and some “we’re the same!” stuff does, as well, but the method is messy – in a very good way. There are no real heroes, and there’s a lot of cruelty perpetrated by a lot of parties. Hatred and indifference – itself a type of hatred – run very, very deep. And District 9 brings all this to light without a sledgehammer, without sacrificing moments of real humour and without slow motion Will Smith heroics (not there is necessarily anything wrong with these, it’s just nice to see something different).

By incorporating a faux-documentary style, District 9 can get away with a lot of exposition (a la The Office, This is Spinal Tap, etc.) and can quickly dispatch everything that frames the core story. This allows for the real meat of it to come from Copley, who is captivating as he spirals, and whose interactions with the Weta-generated aliens are touching and raw.

Visually, District 9 owes a lot to other denizens of dirty sci-fi and futurism: the metal-and-dust look is right in there with the Terminator films, Firefly, Mad Max et. al., Blomkamp clearly tips his hat to these films, but he’s not using them as a template – instead, it’s Johannesburg’s landscape, and the rhythms of Copley’s character that drive the film. Blomkamp’s continual return to these constants ensures that District 9 stays above schlock (even if the aliens do elicit a few giggles now and again).

In the end, District 9 succeeds because the film is both universal and personal, and Blomkamp balances the two on a knife-edge. The streets and skies of Johannesburg seem alive and on the brink, as Blomkamp must have witnessed firsthand as a child. The winners and losers, if there are any, are hard to define. Even as the film ends, the story (and the tension) doesn’t. Halo it’s not, and thank goodness for that.

* This story is only partially substantiated.