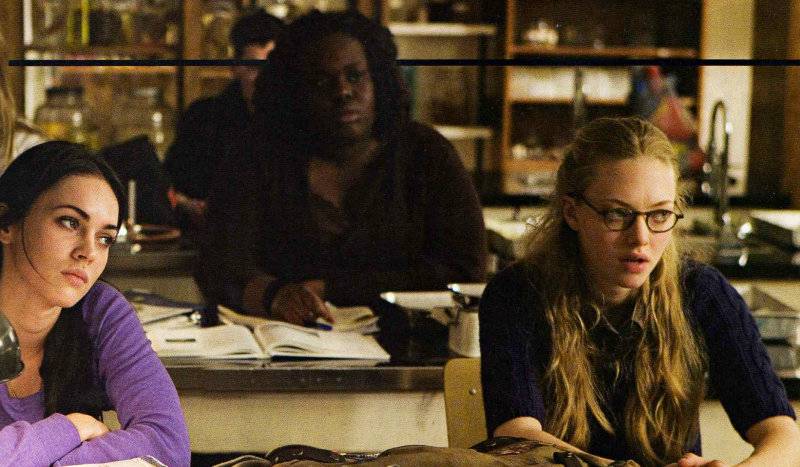 Except for those ordering advance tickets to Saw VI, most horror film fans have pretty much abandoned the idea of a really great American fright flick coming to the megaplex any time soon.

It’s just not in the nature of the beast – real horror, like the prickly, get-under-your-skin-and-freak-the-bejesus-out-of-you kind – is pretty much antithetical to the antiseptic, fast-food franchise-littered North American movie theatre of today. True horror fans know they’re probably not going to find what they’re looking for down the hall from the latest Jim Carey flick. The good stuff is destined for  midnight screenings, film festivals and even arthouses. And those movies are coming not from the U.S. but from Spain, Southeast Asia and even France. (And don’t even get me started on Sam Raimi‘s Drag Me to Hell, a serviceable but poorly written trifle, or the sensationalistic crap from the Rob Zombie factory.)

Jennifer’s Body does nothing to shake the American horror film out of its lethargy.

There were inklings that it might shake things up a little. It’s written by Juno screenwriter Diablo Cody (if you recall, in Juno, Ellen Page‘s and Jason Bateman‘s characters bond while watching a horror movie), and directed by a female director, Karyn Kusama. So there was a strong possibility it was going to subvert the usual horror tropes, at least gender-wise.

It does do this, sort of, by making a high-school vixen, played by Megan Fox, the crazed psychotic killer (no spoiler there, I’m sure) rather than, say, some hockey-masked dude serial killer. Fox gets to play off her image with a character, Jennifer Check, who is completely self-obsessed and skin-deep, and Cody has fun with the facile Jennifer’s dialogue, a bastard hybrid teen-meets-social-networking lingo, as when she tells her friend Needy (Amanda Seyfried), “Move on dot org!” (Though one wonders what a more talented actress – and, perhaps, even one who looks like she’d actually graduated high school in the last ten years – might have done with the tart dialogue.) The friendship between Jennifer and her not-as-hot friend Needy is interesting, too – Cody doesn’t get deep, exactly, but she does explore the jealousy and envy at the heart of the two girls’ relationship.

Jennifer’s Body has a few nice little plot twists as well – the idea of members of a mediocre rock band (think Thirty Seconds to Mars) doing anything they can, even make a deal with Satan, to become successful is a pretty funny (and not at all far-fetched – look at Hinder) idea. But to dwell on the the actual story is to uncover more and more plot holes. For instance, how does the bar in the girls’ hometown of Devil’s Kettle catch fire in the first place? Why, if the rock band is in town just to find a virgin for sacrifice, is it so nonplusssed at the fire? They’re not immortal agents of Satan yet – they could die as easily as anyone else in the fire.

And why is Jennifer in a narcotic haze when she gets into their van? What is that black goo she keeps vomiting up? Why does Needy kick orderlies? These might sound minor, but the screenplay takes pains to explain other things that are no more or less consequential. And, by the way, the movie’s title is a bit of a red herring, too, since it has less to do with Jennifer’s body than Megan Fox’s makeup. A tightly written script this is not.

What Jennifer’s Body is is an LA hipster’s version of a horror movie, with the can’t-miss casting of the babe-du-jour. It’s moderately entertaining, but not nearly as clever as it thinks it is. And it sure isn’t scary.