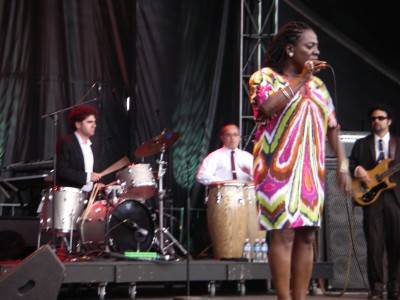 A quick scan of the easy-going crowd attending Sunday’s 10th Annual Burnaby Blues and Roots Festival at Deer Lake Park and you’d be hardpressed to find anyone with sufficient reason to sing the blues, apart from heartfelt versions of “My golf tan is fading blues,” “My mutual funds aren’t responding quickly enough to the economy’s recent upturn blues” and “I forgot to renew my Cialis prescription and I’m heading to Cabo next week blues.”

With a median age of 49 or so, more fold-up lawn chairs than I’ve ever seen at a music festival and an abundance of beer guts and Kate Gosselin hairdos, the comfortably seated, predominantly white concertgoers whooping it up at picturesque Deer Lake Park looked more like castaways from Margaritaville than aficionados in sadness, melancholy and the plight of African-Americans in the Deep South a hundred years ago. But such is the state of modern blues music and its fans. Still, if you wanted to feel depressed, you could always head over to the outdoor festival’s designated smoking area or play Guitar Hero from the back of a flame-adorned SUV promoting the Classic Rock 101 FM’s Bro Jake Show. 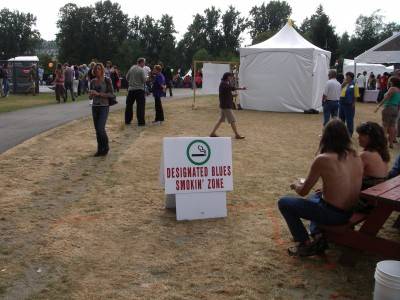 By the time I arrived at the all-day affair, I had missed openers Rich Hope, Oh Susanna and Tinsley Ellis. But my tardiness was rewarded with the parting of the rain clouds and a prolonged appearance of the sun, which was an appropriate way to hear Raul Malo of the Mavericks dish out some Tex-Mex flavoured blues rock accompanied by a smoking horn section.

Shortly after, David Lindley took to the “Garden Stage” up the hill and gave his dedicated followers a reason for their erections while I frequented the booze lineup and barbeque stand. 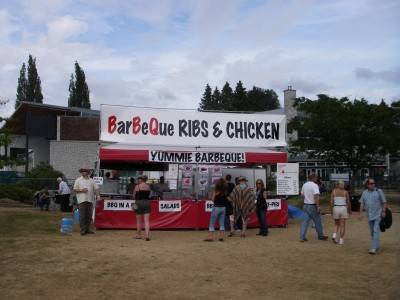 Prior to Keb’ Mo’s panty-removing set of smoothness, I met up with my uncle and his longtime girlfriend who have been to the Burnaby Blues fest seven of the past 10 years. As Blues Fest veterans, they came equipped with lawn chairs AND blankets and they frequently yelled encouraging words at performers like “Right on!” “You tell ’em” and “That’s right!” Although they reserved most of their yelling for Keb’ Mo’, whose laid back, yacht rock take on the blues made women’s thighs quake, particularly when he sang “Go ahead and be free/You don’t have to shave your legs for me/Go ahead and be free/You don’t have to shave anything for me.” That guy must get laid like a rug.

Sharon Jones and the Dap Kings delivered a searing set of old school funk and soul, with Jones giving the crowd a textbook lesson in how to dance in high heels. My only qualm, and it’s a petty one, is if you are playing retro-sounding music and presenting yourself as a retro-looking band, don’t end your set with “We’re the Dap Kings, check us out at  www.daptonerecords.com” as guitarist “Binky Griptie” did.

Here’s another observation I made after consuming four $7 ciders and an $8 “barbecue on a bun”: comedian Roman Danylo is one of the least funny men on the planet. I long suspected this after flipping the channels and accidentally catching a minute of his sketch comedy TV show Comedy Inc. But his taped and live feeds broadcast on the big screens above the stage between bands confirmed my dislike of his brand of humourless comedy.

By the time Motown legend Smokey Robinson took the stage in a silver suit, accompanied by a slick band that gave the backing music a show bizzy sheen reminiscent of Paul Shaffer’s Late Show with David Letterman band and a pair of spandex-clad dancers seemingly transported from Solid Gold circa 1983, I had my fill. Smokey’s voice was smooth as ever, though perhaps not as smooth as his 69-year-old face – read into that what you will. And he utterly floored the crowd three songs in with “Ooh Baby Baby”. Unfortunately, I had an hour of public transit ahead of me, so I had to bail before I could hear “Tracks of My Tears” or attempt to hook up with one of the thousands of 50-something-year-old women in the crowd looking for a younger man with a little bit of stamina.

If that’s not a premise for a blues song, I don’t know what is. 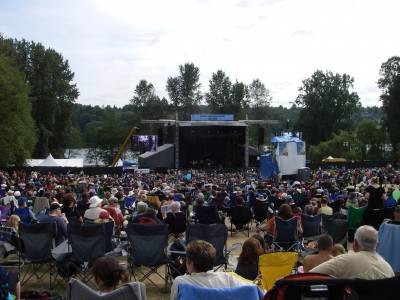