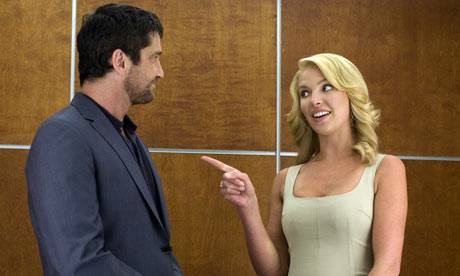 I’m never sure if I should feel sorry for Katherine Heigl or not. On one hand, she’s made millions by starring in films like Knocked Up, and I’m pretty sure her day job on Grey’s Anatomy pays better than peanuts.

On the other hand, though, I’ve never seen her play anyone other than a shrew. Sure, her shrew ranges from only mildly annoying to “Oh God, just stab the bitch already,” but it’s omnipresent. Having somehow seen just about everything Heigl’s ever been in (including way too many episodes of Roswell), I headed in to The Ugly Truth fully expecting yet another portrayal of a tightly wound career woman who just needs to find a man to loosen up. Good news: I may have a future as a psychic.

In the film, Hiegl plays Abby, the superstar producer of a Sacramento morning show that, despite her best efforts, is pulling lackluster ratings. In an attempt to save the show, Abby’s boss brings in Mike (Gerard Butler), the chauvinistic host of a cable access advice program called The Ugly Truth. As you can probably guess, Abby and Mike butt heads – he wants to Jello-wrestle on-air! She wants him to choke on his own vomit! – but eventually (spoiler alert, if you’re a moron), they fall for each other. 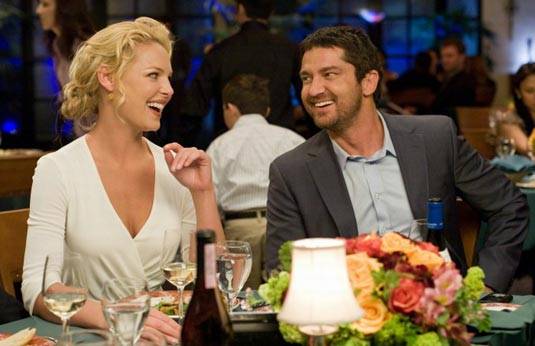 Katherine Heigl and Gerard Butler in The Ugly Truth.

The Ugly Truth is Hollywood’s latest offering to the gods of Rom and Com, and it stays fairly neatly within the genre’s well-established boundaries. There’s the meet-cute (misunderstandings!), the montage (trying on clothes!), and the “OMG, we’re in love!” realization. Unusually for a romantic comedy, though, this film garnered an R rating, which meant that characters were actually allowed to drop casual f-bombs in a manner somewhat resembling real life. Prudes and the elderly may find the cursing and other adult content off-putting, but pottymouths (like me!) should enjoy it.

Hiegl and Butler’s co-stars, which include Curb Your Enthusiasm’s Cheryl Hines, do decent if unremarkable jobs, but it was John Michael Higgins as Hines’ co-anchor Larry who coaxed the loudest laughs out of me. You may recognize Higgins from the DIRECTV ads running now or his work in some of Christopher Guest’s films, and if so, you know to expect that he will bring the funny. One of his short bits, something about a bird in his dressing room, elicited a particularly embarrassing chortle from my seat.

The most important part of losing yourself in an experience as insubstantial as that offered by a romantic comedy requires that you believe wholeheartedly in the chemistry between the two leads. Maybe it’s because I don’t find Butler that attractive, but I never really understood what Heigl’s character saw in him. At best, he personifies caveman chic, and at worst… well… has anyone else ever noticed that he seems to talk only out of the middle of his mouth? It’s like he’s storing food in his cheeks for winter or something.

I hear Butler does pretty well with the ladies, though; I’m betting if I ran into him in a darkened bar, I’d be willing to overlook the cheek thing. And Heigl? Even if you’re as annoying as all of the characters you end up playing, I still kind of want to hang out with you, so kudos.

That doesn’t mean I forgive the rest of the audience for clapping at the end of the screening, though.