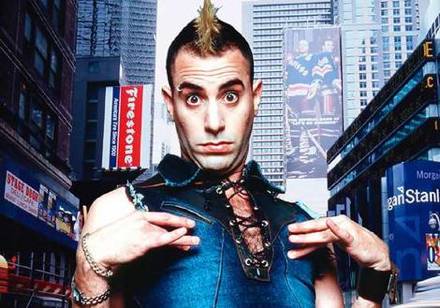 Considering the male phallus falls somewhere between Karl Malden (RIP) and Abe Vigoda in the looks department, it shouldn’t come as a surprise that full frontal male nudity is now the go-to sight gag in an increasing number of Hollywood comedies. From the Judd Apatow-approved Walk Hard: The Dewey Cox Story and Forgetting Sarah Marshall to the current summer hit The Hangover, exposed penises [penii?-ed.] are the new boob flash. But as far as wang-o-vision goes, BrÃ¼no, the latest discomfort-fest from Sacha Baron Cohen, takes male genitalia to a whole new level. Without giving too much away, let’s just say it’s breathtaking.

Following the same formula as Borat, mixing Punk’d-style rouses with staged scenes, Baron Cohen transforms himself into BrÃ¼no, a flamboyantly gay Austrian fashionista who attempts to resurrect his fallen star by traveling to the U.S. to become a celebrity. He gets an unaware agent, pitches his own offensive TV show, tries to seduce Republican Ron Paul, adopts a baby from Africa, and so on.

At the heart of BrÃ¼no, however, is an attempt to show the ridiculousness and downright ugliness of homophobia in America, which seems a little odd at first coming from a movie that gets many of its laughs from painting such broad gay stereotypes. But it works, mostly.

For all the clever set-ups, outrageousness and uncomfortable situations, BrÃ¼no picks some pretty easy targets – redneck hunters from the American South, Christians who claim they can cure homosexuality with a good dose of Jesus, baby pageant parents and Paula Abdul.

Still, BrÃ¼no is an ambitious and enjoyably crude bit of guerrilla filmmaking, with its heart – and dink – in the right place.