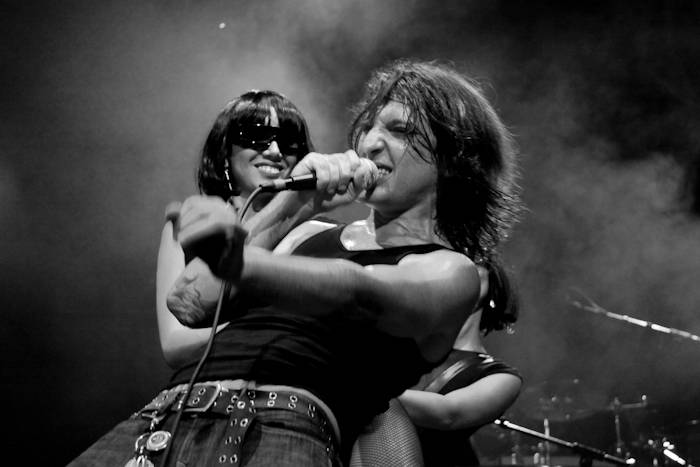 Mickey Avalon at Pacific Coliseum, Vancouver, as part of the Blazed and Confused Tour, July 22 2009. Photo by Jessica Bardosh

One of the raunchiest shows I’ve ever seen was last year’s Mickey Avalon appearance in Seattle at the Showbox.

Though described by one tweeter as “coke music for white boys,” the 33-year-old rapper’s funny, occasionally morbid tracks – including “Jane Fonda”, which manages to make the actress’s name sound like the lewdest sex act you’ve never heard of, not to mention the hilarious “My Dick” – seem to attract an inordinate amount of female listeners. Many of whom, it might be safe to say, are eager to perform the Jane Fonda on their hero.

Born Yeshe Perl, he chose his name (or so the story goes) from two favourite pop songs, Toni Basil’s “Mickey” and Roxy Music’s “Avalon”. The self-made 33-year-old rapper has a bordering-on-mythic back story to go with his larger-than-life onstage and recording persona.

His grandparents were in the concentration camps, and both he and his parents used drugs before he turned to gay sex in Portland to fund his heroin habit (this according to the Wikipedia entry on him, the accuracy of which Mickey Avalon more or less confirms in our interview). He has a daughter, 12, from an early marriage. He began rapping upon moving to Los Angeles, and released his self-titled debut in 2006.

We’re still waiting for the follow-up; in the meantime, HBO’s use of “My Dick” over the end credits of its new series Hung and the Ave’s opening stint for Slightly Stoopid, Stephen Marley and Snoop Dog on the Blazed and Confused Tour is bringing him new fans. We talked to Mickey Avalon on the tour bus as he and his crew – including his girlfriend, his DJ (Mackey), opening act Beardo and dancers Eliza and Lezlie – headed out for their first date of the tour in Primm Valley, Nevada. 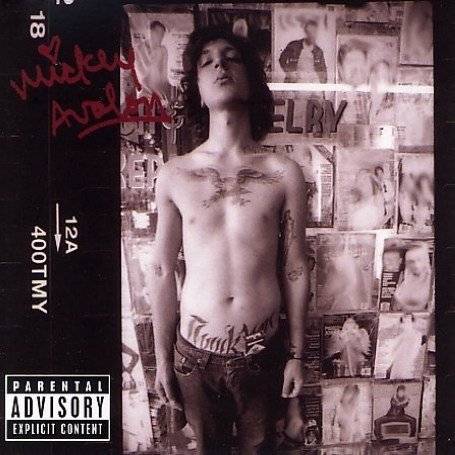 Shawn Conner: How well planned is this Blazed and Confused thing? Is it well organized or are you making it up as you go along?

Mickey Avalon: Probably a little of both. It’s my first time opening for somebody else, well, to this many people. We played played some big shows with the Red Hot Chili Peppers a few years ago to 2,000 or so, but this is like 12-15,000. I guess I’m kind of winging it, I rehearsed a little, and the dancers have some stuff choreographed.

SC: I saw your last show in Seattle. The dancers add a lot to it.

MA: Yeah. Just ’cos with rap music there’s no band. That’s the problem, for the most part, it’s more like studio music. And I never wanted to add a band. And maybe one day we’ll do some kind of light show. My first show I had a black bodybuilder onstage, but then the girls kind of became the staple. I had this other girl I would throw around the stage, she was strung out and she could take a lot of pain, and that just kind of turned into the dancers.

MA: Yeah. They were mostly for some of the smaller gigs in Hollywood. Can you hold on? [places an order with someone on the bus]. Sorry, we’re just at a gas stop.

SC: Are you asking for munchies?

MA: No, heating pads. My shoulder’s a little bit fucked. I got into a fight in the canyon. It didn’t really hurt right away. We were taking a cab home after we went to one of Beardo’s shows at the Roxy. I don’t remember too well if the cab driver started it or what… I think he stopped in front of this other car and the guy got out and started banging on the cab. I got out and punched him in the face and was running back to the cab when I fell. I’ve got a pretty gnarly bruise on my hip. I was worried he might track me down but it’s been a week so I think I’m okay.

SC: Wow. So, uhm. Is someone looking after your place?

MA: My mom has the keys. There’s nothing really to take. Two laptops, but I’ve got those with me.

SC: Do you have pets?

MA: No. I’ve got nothing against them, I just like to be able to get up and go. I have a kid, she lives with her mom. I’ll miss her, but there are four or five days in the middle of the tour where I’ll see her when I get home.

SC: Has she seen you perform?

MA: She’s 12, so she’s never seen me in a club or bar, but she came to see me when I opened up for the Red Hot Chili Peppers. John Frusciante [RHCP guitarist] showed her how to play a David Bowie song. She watched the show. The lyrics are still bad, but it’s not like clubs like the Roxy which are more interactive. I couldn’t touch anyone in the crowd. The dancers aren’t wearing much and stuff, but she can deal with that. 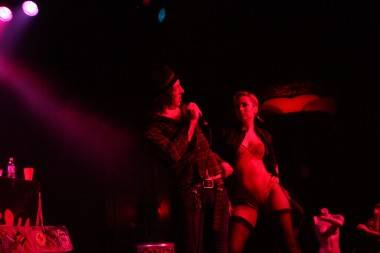 SC: I remember when I first heard your CD and was doing some research and there were all these really raunchy photos from some of your LA gigs. Is that the case everywhere or do you have an especially, uhm, passionate following at home?

MA: I thought it was only there, but now I can’t even say L.A.’s the wildest. But since it’s home, it sticks out in my mind. It’s just nice to play at home, they did a story on me in LA Weekly, the weekly paper here, which was really cool.

SC: What was this thing you wrote about Farrah Fawcett’s death being overshadowed by Michael Jackson? It seems to have made a few people angry…

MA: I just said that for a joke, I’d say 99 per cent of people got it, I was just fucking around. Obviously Michael Jackson is brilliant. It was just like a bulletin, I hadn’t been on Myspace for awhile, and I got on there to promote this show. A few people wrote to say “I’m not your fan anymore.” Good, I don’t want fans like you anyway. 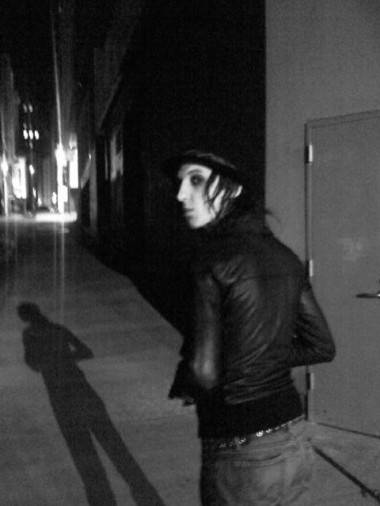 MA: Three? I thought it was two. I know I follow my DJ, Mackey. I wanna figure out Twitter and Facebook. I do my Myspace all by myself, then Facebook came out, they even changed Myspace around. Facebook, I haven’t really got on much. I follow Beardo. I maybe started following Travis Barker.

SC: How many bat mitzvah’s have you played? [A post on his website advertises his services for your daughter: “Have the Ave. at your Sweet 16 or Bat Mitzvah…if your daddy can afford me”]

MA: None. I played a Sweet 16 party. I didn’t really get any calls, I got some calls to my booking agent, but it was mostly kids with no money. I just played another birthday, it was her 21st birthday, maybe 20 people were there. 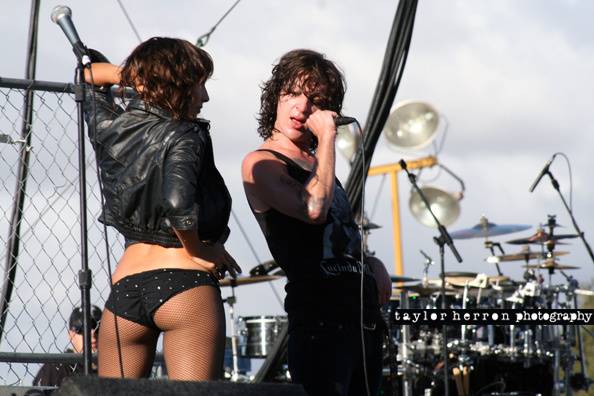 SC: So where’s the new album at? Is it finished?

MA: I’m always working on stuff, it’s mixed and mastered, there are some collaborations on it. I know as a fan of the other people’s music I hate reading about the politics, you know, why it’s taking so long to get out. It’s pretty much done. I’ll be playing some of the new songs on this tour, though it’s a short set, only about half an hour.

SC: Who are the collaborators? Travis Barker [Blink-182], right?

MA: Yeah, I did a song with him, and he produced it. I did a song with Kid Rock, with Kitty Perry [note: name has been slightly altered to protect the not-so innocent], and a song with Perry Farrell, I don’t know if that will be on there, and just some other sampling stuff. Once you get on a major label, all these decisions take time. It goes both ways I guess if you want to get your music out as many people as possible. I try not to complain about it. Sometimes you definitely just want to make your stuff and put it out.

SC: In time for Christmas?

MA: I guess that will probably the deal, we wanted to get it out for the beginning of the summer, but yeah, maybe September. I thought since the record wasn’t going to be ready, at least have the single ready. I’m gonna be putting some new songs on Myspace later. 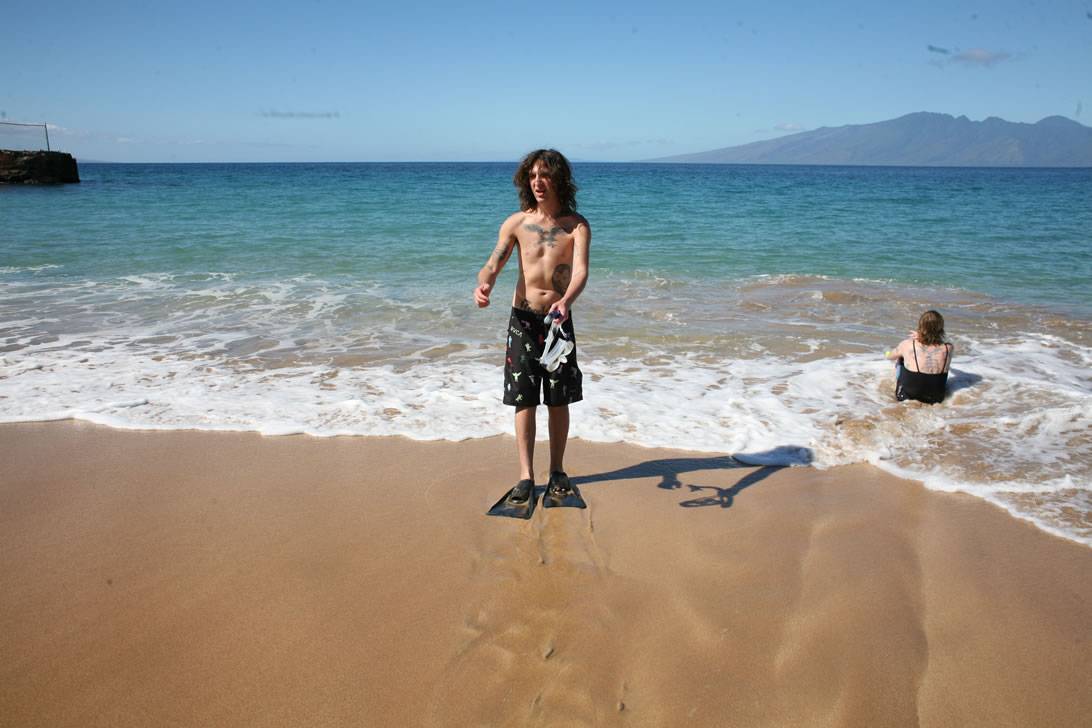 Mickey on the beach.

MA: She asked to be called that. She sings the chorus. I’m not really sure how much I’m supposed to talk about it…

SC: We can change her name if you like.

MA: Just say “Kitty Perry”. People can figure it out.