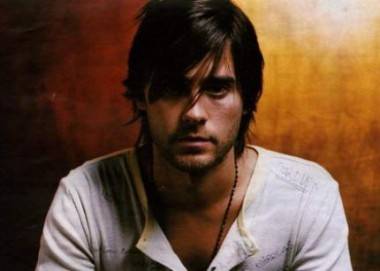 It looks like Jared Leto is getting a thrashing from Death Cab for Cutie.

In an interview with the magazine The Big Takeover, the group’s Nick Harmer and Ben Gibbard question not only the sincerity of the former star of My So Called Life but also his fondness for eyeliner.

Harmer is quoted as saying,Â “Not to throw anyone under the bus, but Jared Leto and his band 30 Seconds to Mars – he’s acting the part.”

“He’s a professional actor in music; so there’s no way to feel any sincerity about his position as a musician,” says frontman Gibbard.Â  “Because he makes a living playing characters – so why wouldn’t he be able to take a step forward? Then you’re also acting what you think a rock star should act like.”

“People embrace that and they put him on posters and they’re a wildly popular band with some people,” Harmer continues. “And they just look at that and think ‘Oh, that’s what rock stars do: they wear eyeliner.’ I don’t know, it’s just a weird thing to me.”

Of course, Gibbard is married to actress Zooey Deschanel (Yes Man, (500) Days of Summer), who is also in a band herself – She & Him – so he is definitely setting himself up for accusations of hypocrisy.

4 responses to “The credibility of 30 Seconds to Mars”