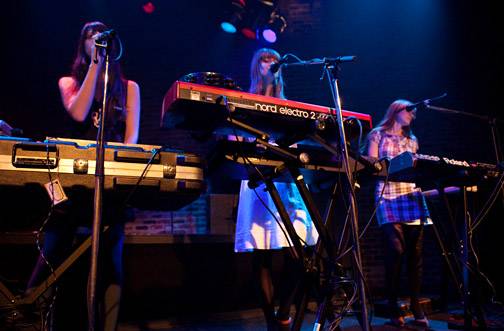 “I can’t believe I live in a world gay enough to have a band named Au Revoir Simone,” tweeted a Twitterer not too long ago (and that sentence in itself is pretty gay).

It’s still my favourite quote about the band. But I have to say, after seeing the Brooklyn trio perform at Richard’s last night, if this is gay, give me more of it.

First, though, I should mention that not acknowledging the group’s novelty factor would be tantamount to ignoring an elephant in a hot tub. Three comely lasses singing harmonies over ’80s synth sounds is a hook that’s pretty much guaranteed to raise peoples’ (i.e. critics’ and bloggers’) curiosity levels. But it’s what you do with that attention that counts. And Wednesday night, the Simones turned their dreamy and yes, ethereal pop tunes – which, on their latest Still Night, Still Light, can seem on the verge of floating away – into a set of strong-backed dance-pop.

The disco ball helped, at least a lot more than the clouds of dry ice that spewed ineffectually over the heads of the crowd (about 200) every few minutes at the start of the set. Once the Simones discovered the glittering orb they asked that it stay on for the rest of the set, and this helped kick the performance up a notch. Some in the crowd of about 200 danced, and the rest of us watched, mesmerized/lulled by the sounds of their vintage keyboards and their spot-on harmonies. The Au Revoir Simones – Heather D’Angelo, Erika Forster and Annie Hart – also made judicious use of a tambourine, cymbal, and shaker. 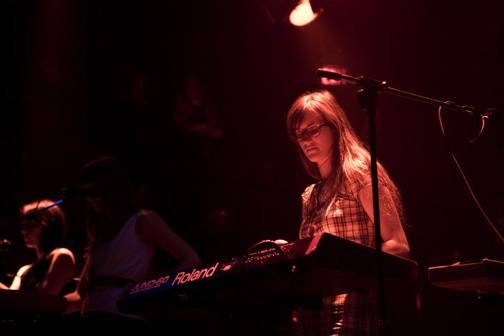 The encore came, and an a cappella bit in the first song was hair-on-the-back-of-the-neck-raising; however, a stab at improv showed making stuff up may not be the trio’s strong point. My favourite moment banter-wise was when Hart, she of the sexy-librarian look, suggested to D’Angelo that D’Angelo crowd-surf. “I did it in such-and-such, and Erika did it in somewhere-else,” she said. D’Angelo looked at her bandmate as if she was nuts. Just then Erika stepped in. “I think the stage is too low,” she said, and D’Angelo regarded her bandmate with a thankful expression.

Mention should also be made of the UK’s Findlay Brown who, backed by a four-piece band, spun out vintage-sounding rock ‘n’ roll recalling Buddy Holly and Roy Orbison; a little Elvis Perkins in Dearland but with more dirt under the fingernails. (Though Brown himself was impeccably coiffed and dressed.) Some of his songs are so classic-sounding they could become new American standards; a final unplugged-and-played-on-the-dancefloor version of “Train Train” was fantastic.